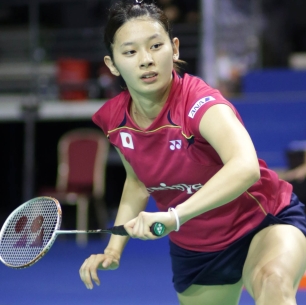 Korea’s Hwang Jong Soo made up for his compatriots’ disappointing performances at the Badminton Asia Championships by entering the semi-finals today. The Korean challenge in Men’s Singles was expected to be shouldered by Son Wan Ho and Lee Dong Keun, but neither made it past the second round. Rather, it was the No.140-ranked Hwang (left) who made an unexpected appearance in the semi-finals after a string of impressive victories.

Hwang first disposed of the No.3 seed Nguyen Tien Minh of Vietnam, 21-13 21-19, before crushing the challenge of Singapore qualifier Huang Chao. In the quarter-finals he scored another impressive victory, over Hsu Jen Hao of Chinese Taipei, 21-14 21-19, for his third straight-games result. Hwang, who has played only one event this year – his home Victor Korea Open – next faces Sho Sasaki. Japanese left-hander Sasaki just about survived his quarter-final against China’s Song Xue, 21-16 11-21 21-19, in 70 minutes.

The top half will be an all-Chinese contest and will attract most of the attention, for two-time champion Lin Dan, on the comeback trail, assured himself of a semi-final place. The world and Olympic champion has taken just about half-an-hour to deal with each of his three opponents. In the quarter-final today Lin Dan dismissed Hong Kong’s Wei Nan 21-10 21-7, earning himself a showdown with younger compatriot Liu Kai, who survived a stiff test from India’s Guru Sai Dutt, 22-24 21-9 21-13.

In Women’s Singles, All England champion Wang Shixian of China powered into the last-four. Wang had survived a scare in the second round against Chinese Taipei’s Pai Hsiao Ma, edging through 21-17 16-21 21-19, but in the quarter-final she shut the door on Korea’s Lee Jang Mi in straight games, 21-16 21-19. Wang, who is in pursuit of a first Asian Championships title, will be wary of her semi-final opponent, PV Sindhu, who has beaten her three times in four meetings. The Indian had a tough passage to the last-four, having to recover from a game down against Thailand’s Busanan Ongbumrungpan. The other half will see Korea’s Sung Ji Hyun against Japan’s Sayaka Takahashi (BWF home page). While Sung battled her way past Chinese Taipei’s Tai Tzu Ying, 16-21 21-13 21-18, Takahashi had it relatively easier against Korea’s Kim Hyo Min, 21-13 21-18. * Men’s Doubles third seeds Maneepong Jongjit/Nipitphon Puangpuapech of Thailand had too many weapons for Malaysia GPG champions Danny Bawa Chrisnanta/Chayut Triyachart of Singapore (21-14 21-14) as they booked a semi-final against Korea’s Shin Baek Choel/Yoo Yeon Seong. The other semi-final will be an all-China contest between Shi Longfei/Chen Zhuofu and Li Junhui/Liu Yuchen.

* India’s Ashwini Ponnappa/Jwala Gutta (above) were not troubled by Malaysia’s Amelia Alicia Anscelly/Soong Fie Cho on the way to a 21-12 21-12 result, but the semi-final against Chinese twins Luo Ying/Luo Yu is expected to be a different proposition. China’s Zhong Qianxin/Huan Xia and Korea’s Kim Ha Na/Eun Jung Kyung face off in the second semi-final.

* Huan Xia also entered the Mixed Doubles semi-finals, in the company of Zhang Wen. The Chinese recovered from a game down to beat Chinese Taipei’s Chen Hung Ling/Cheng Wen Hsing, 18-21 21-12 21-17. Shin Baek Choel too made the last four, with Jang Ye Na, and the Koreans are due to play former Asian champions Sudket Prapakamol/Saralee Thoungthonkam next.