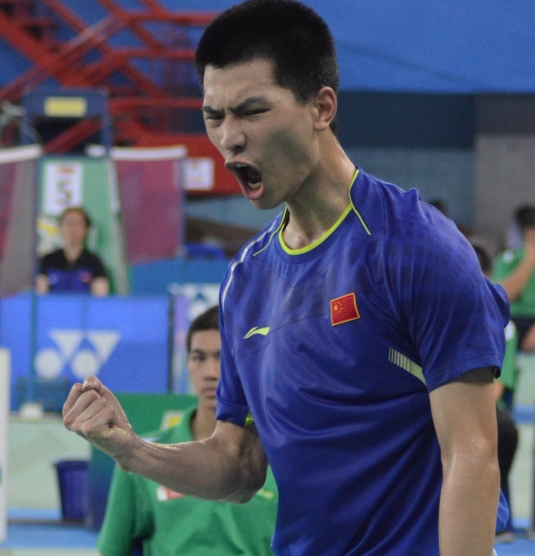 Three Japanese, including Yamaguchi, Aya Ohori and Natsuki Nidaira, qualified for the last eight of the Women’s Singles. It wasn’t smooth sailing though for the

top seed. Yamaguchi survived a mid-match scare, recovering from a dicey position against Ruselli Hartawan (below) of Indonesia. Hartawan outwitted Yamaguchi in the second game and stayed level until midway through the third, after which Yamaguchi found her range of attacking shots and steadily pulled away, 21-12 19-21 21-14. The defending champion will meet Singapore’s Liang Xiaoyu, who had it easy against Indonesia’s Aurum Oktavia Winata, 21-8 21-13. Just as impressive was China’s Qin Jinjing in her rout of Denmark’s Mia Blichfeldt (21-11 21-8). Qin will face Thailand’s Chochuwong Pornpawee who was taken to three games by Vietnam’s Nguyen Thuy Linh. Qin’s compatriot He Bing Jiao also entered the quarter-finals.

In Men’s Singles, China’s Zhao Jun Peng (3/4) joined compatriots Lin Gui Pu and second seed Shi Yuqi in the quarter-finals. Zhao (featured image) twice worked his way out of sticky situations – in the third round against India’s Harsheel Dani in the morning session and later in the fourth round against Korea’s Lee Jun Su. In both matches, Zhao was outclassed in the opening game but figured out effective solutions. Dani, who was all over Zhao in the first game, conceded he didn’t know what happened after that.

“I think he drew me into a flat game and waited for my shots,” Dani said. “But I’m not sure where I went wrong.”

Zhao repeated the performance against Lee. Having lost the first game, he held on for a close win in the second and emerged comfortably in the third, 17-21 21-19 21-9. y coaches had prepared me well. Since I was playing a Japanese opponent, they told me not to underestimate his returns on my first hard shot.” * Malaysia’s Tan Jinn Hwa (above) showed plenty of courage in ensuring a quarter-final passage in Mixed Doubles with partner Goh Yea Ching. The Malaysians were at the end of a titanic battle with Thailand’s Viriangkura Tanupat/Pacharapun Chochuwong when Tan pulled up with cramps in his leg. Another painful rally later, he pounced on the shuttle, killed it and collapsed to the ground. The 21-18 20-22 21-19 victory will see them face Japan’s Yuta Watanabe/Arisa Higashino next.

* Japan’s Akane Araki/Chiharu Shida recovered from a desperate situation against Chinese Taipei’s Chang Ching Hui/Chang Hsin Tien in Women’s Doubles. The 9/16 seeds were way down in the third but, from 12-18, they plucked seven straight points to gain the advantage and closed out the contest on their second match point: 21-13 14-21 22-20. Araki and Shida face China’s Du Yue/Li Yin Hui next. * In Men’s Doubles, India’s Arjun MR and Chirag Shetty (above) scripted a surprise win over 9/16 seeds Mathias Bay-Smidt and Frederik Sogaard Mortensen of Denmark: 21-15 13-21 21-17. In another close contest, Indonesia’s Muhammad Rian Ardianto/Hendrik K Clinton held their nerve at the end of a see-saw battle with China’s He Jiting/Zhao Jian: 17-21 21-13 22-20. Denmark’s Alexander Bond/Joel Eipe were the only Europeans left in the Men’s Doubles quarter-finals after they easily saw off the challenge from Singapore’s Ryan Ng/Bernard Ong, 21-17 21-12.