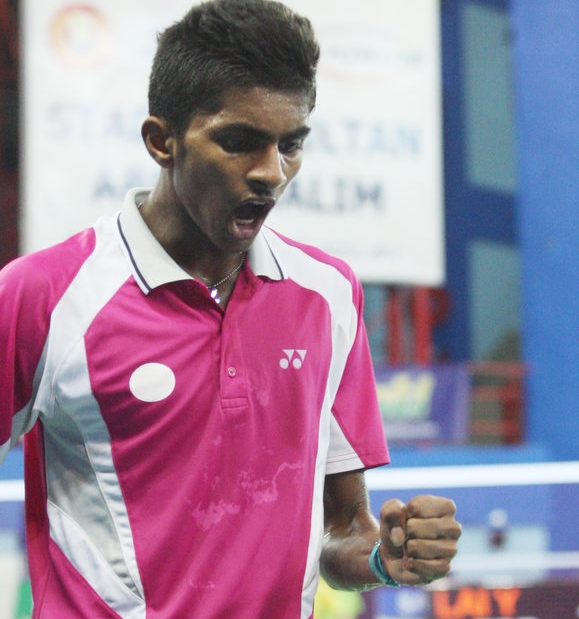 Dias (BWF home page), who spends an hour-and-a-half every day travelling by bus to reach his training court in Colombo, had just levelled a first-game deficit when his right thigh started to cramp. Second seed Shi Yuqi of China gave a badminton lesson to Abdelrahman Abdelhakim and the Egyptian walked away after the 21-6 21-4 rout saying it had been a “honour” to play his Chinese opponent. “It was a good experience,” said Abdelhakim. “I got a lot of experience from this match and from watching the Suhandinata Cup semi-finals and finals last week. I couldn’t get many points today but then he’s the No.2 seed. Badminton is not popular in Egypt but we are seeking to spread the game. I follow it on the YouTube channel of BWF and my favourite player is Lin Dan. I’m planning to visit Malaysia or India to train during the summer as I’m aiming to play the Senior Olympics.”

Top seed Jonatan Christie of Indonesia progressed without breaking a sweat; indeed, except for Dias’s match, the other Men’s Singles action featured straight-game victories. Winners included Malaysia’s Satheistharan R, who trailed Thailand’s Mek Narongrit all through the second game but came alive towards the end, winning four straight points to make the third round.

Hong Kong’s Lee Cheuk Yiu had to fight off trouble in the second game, as opponent Enrique Penalver of Spain held two game points; the Hong Kong player regained the attack and quickly closed out the match, 21-15 23-21. Apart from Aditya Joshi, the only other seed to fall in Men’s Singles was Rasmus Gemke (5/8) of Denmark, beaten 21-18 21-18 by Kim Hui Tae of Korea.

* The big names in Women’s Singles, Akane Yamaguchi (Japan, 1), Busanan Ongbumrungpan (Thailand, 2) and Aya Ohori (Japan, ¾) booked their third-round spots with minimum fuss. Malaysia’s Goh Jin Wei and Lee Ying Ying also made the third round in contrasting styles – while Goh needed three games against Thailand’s Thamolwan Poopradubsil, Lee was hardly troubled by Nicole Albo (Philippines) during a 21-14 21-6 rout. Denmark’s Mia Blichfeldt (5/8) toyed with Armenia’s Knarik Margaryan (above), who at 13 is the youngest player at this event, 21-4 21-10. The Danes towered over the Dutch pair of Jille and Alida Chen and took the first game easily, but Jille’s clever placements and energetic smashes, helped by Chen’s blocks at the net, helped them gain control and left the Danes short of ideas in the second and third games. The 10-21 21-14 21-13 victory gives Jille/Chen a place in the third round against Japan’s Katsuki Tamate/Saori Ozaki, who too required three games to get past another Danish pair, Frederik Sogaard Mortensen/Sara Lundgaard, 16-21 21-13 21-12.

* Jille and Men’s Doubles partner Alex Vlaar were just as impressive against Hong Kong’s Lee Chak Wai/Li Kuen Hon in their opening round. Playing an unhurried and cultured variety of badminton, quickly converting defensive positions into attack, Jille and Vlaar rebounded from a close first-game loss to eventually cruise to victory, 21-23 21-16 21-13.