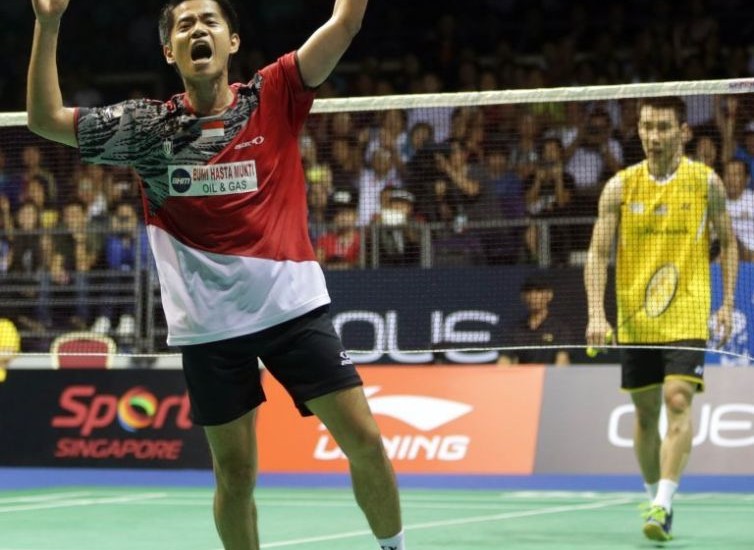 Men’s Singles dynamo Simon Santoso announced his return to the top flight with a blistering 21-15 21-10 demolition of world No. 1 Lee Chong Wei in the OUE Singapore Open 2014 finals today. Packing a rock-solid forehand and all-court guile and aggression, the compact Indonesian completely outclassed and overshadowed the overwhelming favourite who was riding a crest of success with three straight MetLife BWF World Superseries titles – in Malaysia, Birmingham (All England) and India. Before fans, many chanting the champion Malaysian’s name, could settle properly, 28-year-old Santoso (BWF home page) rocketed into the lead and never looked back.

Appearing confident and relaxed, as he had since working his way through qualifying to the main draw, the underdog unleashed a torrid and relentless attack on his rival who, clearly rattled, committed a litany of errors, some woefully amateurish. Even the luck of the net went against Lee as a number of his shots clipped the top and fell back on his side while Santoso’s trickled over. Lee’s line-call challenges didn’t help either – they came and went unsuccessfully.

It was the superstar’s worst “day at the office” for a long time. In short order, Santoso – rebounding from injury – wrapped up the first game, never being overtaken after 7-all. The second game was equally impressive as the former world No. 3 continued finding the lines and, brandishing his lethal forehand, pouncing on anything slightly high with powerful drives and smashes. Lee was simply unable to cope; completely out-of-sorts and shell shocked as Santoso’s net forays paid repeated dividends as did his shots wide to the back court, beyond Lee’s forehand.

At 12-4, the match looked just about done but Lee managed a flurry of bravado that pushed him to within two points of Santoso and spectators – buoyed by this six-point run – urged him on – but it wasn’t to be one of his spectacular comebacks. In fact, those were his last points of the evening.

Santoso remained focused, finding good angles and using the slice to telling effect. The end was swift and deadly – ironically another Lee error; a backhand into the net. Santoso screamed and shook his fists in celebration; wresting his third World Superseries title.

So comprehensive was the victory it moved expert commentator and retired badminton champion, Gill Clark, to declare: “I cannot remember the last time I saw Lee Chong Wei outplayed in a match…who would have thought.”

Meanwhile, in the other signature match, China’s Bao Yixin and Tang Jinhua (below), wrote another chapter in their incredible saga, capturing their ninth Women’s Doubles title in 11 tournaments and maintaining their unbeaten record in finals. It was their sixth World Superseries triumph. The difference on this occasion was that, for the first time, they had to come from a game down to defeat the Danish duo of Christinna Pedersen and Kamilla Rytter Juhl to whom they had never before dropped a game in two previous clashes.

Early aggression and enterprise by the European champions – mixed with good changes of pace and resolute defence – earned them the opening game, 21-14. However, the Chinese were slowly but surely finding their comfort zone, with Bao being particularly potent at net. Tang, too, began showing good movement and anticipation and, by the second game, they were in full cry – firing winners cross court, down the lines and down the middle. Their ability to turn defence to attack kept the pressure on the Danes who succumbed on the fourth game point.

Momentum on their side, the Bao-Tang express bore down on the finish line in the third game. At 9-3 up, they could afford to cruise and even offer the odd indiscretion in their shot-making. Though Pedersen and Rytter Juhl strove to keep hope alive, they looked beaten and, despite withstanding three match points, they could not deny the inevitable outcome – 14-21 21-19 21-15 to the Chinese juggernaut.

* Wang Yihan (above) struck gold for the second successive year at the Singapore Indoor Stadium, ousting Chinese team-mate Li Xuerui – coincidentally the beaten finalist in 2013 also – to retain the Women’s Singles championship. She celebrated another flawless performance – 21-11 21-19 – at the event to earn her 20th World Superseries title. * Last weekend, Tontowi Ahmad and Liliyana Natsir (above) failed to defend their India Open title but there was no such derailment today as their names remained affixed to the Mixed Doubles honours. The superstar pairing defeated Indonesian compatriots, Riky Widianto and Puspita Richi Dili; 21-15 22-20 the final score.

* Men’s Doubles veteran, Cai Yun, was back in winners’ row with a new partner, Lu Kai, beating Chinese Taipei’s Lee Sheng Mu and Tsai Chia Hsin. In just their second outing together, the Chinese prevailed 21-19 21-14, with six-footer Lu hammering smashes from the back court as the opposition’s challenge withered (below: presentation ceremony).