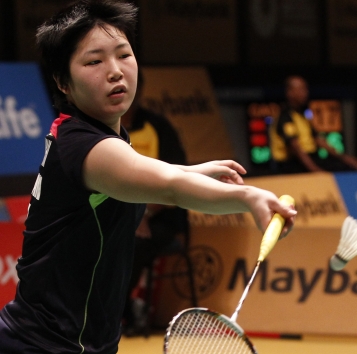 Jonatan Christie has been top-seeded in Men’s Singles for the JATI BWF World Junior Championships 2014 for the Eye Level Cups beginning today. Indonesia’s Christie (left), quarter-finalist at the event last year, heads the list of 110 Men’s Singles players vying for the top prize in the junior circuit. Eighteen

players including Christie have received first-round byes in a draw of 128. This includes second-seeded Chinese Shi Yuqi, to whom Christie lost in the World Junior Team final after dominating the match for the most part. A bitter Christie hoped he would meet Shi again and avenge his loss.

If the team events were any indication, the individual championships will see a high level of competition. An added incentive is that all the quarter-finalists will automatically qualify for the Youth Olympic Games in August 2014. Drawn to meet Christie in the fourth round is Denmark’s Anders Antonsen, recent winner of the European U-17 Championships. Singapore’s Soon Yang Bernard Ong, India’s Harsheel Dani, China’s Lin Gui Pu and Malaysia’s Cheam June Wei are others to watch in this half. Hong Kong’s Lee Cheuk Yiu was impressive in the team matches and has been seeded to meet Christie in the quarter-finals.

China’s Shi showed admirable composure in the World Team final against Christie, and that will mark him as a favourite to progress into the later stages of the draw. His stiffest test could come in the quarter-final against Denmark’s Rasmus Gemke. Indonesia’s Anthony Ginting, India’s Aditya Joshi, Germany’s Max Weisskirchen and Vietnam’s Pham Cao Cuong could vie for the other quarter-final spot.

In Women’s Singles, the obvious favourite would be defending champion Akane Yamaguchi. The Japanese already has a Superseries victory to her name, but she showed she too is susceptible to pressure in the tie against Chinese Taipei’s Lee Chia Hsin. However, she did appear to recover in the semi-final against China. Given the spotlight on her, it will be interesting to see if she can shrug off the attention on her and retain the title. Her vanquisher Lee Chia Hsin is in the same half, but in a different quarter. Other challengers in her way are China’s Qin Jinjing (winner of the Dutch and German Junior Opens this year) and Denmark’s Mia Blichfeldt (above). The other favourite for the title is second seed Busanan Ongbumrungpan who is making a name for herself on the senior circuit. The Thai has already troubled the likes of Olympic champion Li Xuerui and No. 3 Wang Yihan. Her chief opponents on the road to the final are likely to be China’s He Bing Jiao (winner of the Vietnam Open 2013) and Japan’s Aya Ohori who stumbled in the semi-finals in 2012 and final in 2013 and will be hoping her luck finally turns around.

* China are favourites to claim the doubles titles. The Men’s Doubles top seeds Huang Kaixiang and Zheng Si Wei (right) have scarcely put a foot wrong over the last * China have unearthed another gem in Chen Qingchen who complements Huang Kaixiang in the Mixed Doubles and Jia Yi Fan in Women’s Doubles. Chen and Jia are Asian Youth champions and winners of the India Grand Prix Gold. Their superiority over other pairs was evident last week. Indonesia’s Rosyita Eka Putri Sari too has impressed in both her events – with Muhammad Rian Ardianto in Mixed Doubles and Apriani in the Women’s Doubles.