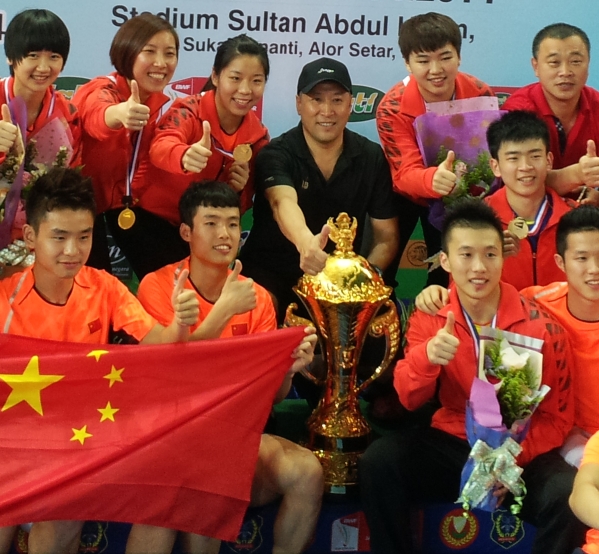 The 3-0 victory means China have won the Suhandinata Cup nine times, in the process dashing Indonesia’s hopes of winning it for the first time. Japan and Thailand were joint bronze-medal winners.

China (below) were favourites going into the final. Even the Indonesian camp wasn’t optimistic of victory; coach Bambang Suprianto was particularly apprehensive about the doubles and it was evident why. China had the biggest weapons in their armoury, beginning with the Mixed Doubles combination of Huang Kaixiang and Chen Qingchen – the World and Asian Junior champions.

Indonesia’s Muhammad Rian Ardianto and Rosyita Eka Putri Sari struggled to contain their opponents from the first point. The Chinese set a scorching pace marked by fearsome hitting from Huang and sharp interceptions by Chen. The first game was over quickly but Indonesia were able to slow things down in the second. The strategy didn’t work for long and it was business as usual for Huang and Chen in the decider. The Chinese never relinquished the attack even when Ardianto and Eka Putri fired their smashes. Huang and Chen returned everything thrown at them. The 21-14 17-21 21-17 result for Huang and Chen was accomplished in 50 minutes. Indonesia pinned their hopes on Men’s Singles talent Jonatan Christie, who beat his Chinese opponent Shi Yuqi at the same event last year. Christie did everything but win the match. A player with fluid movement and all-round ability, the Indonesian dominated his opponent but turned erratic when it mattered most. In the second game, Christie led 19-15 and 20-17 but his game let him down at the most crucial moments, either sending the shuttle wide or into the net. Shi, the Asian Youth champion, won the last five points to take the match 21-19 22-20. A crushed Christie was at a loss for words after the defeat.

“I was nervous at 20-17,” he admitted. “He played very safe on those points. I was just not able to kill the shuttle. I beat him at the same event last year but I couldn’t do it this time. I want revenge…I want to beat him in the individual event.”

China’s Men’s Doubles pair of Huang Kaixiang and Zheng Siwei have shown plenty of promise in their fledgling career. The India Grand Prix Gold runners-up were up against Muhammad Rian Ardianto/Clinton Hendrik Kudamasa. Expected to dominate, the Chinese were held on a leash in the early part through some smart tactics by Ardianto and Kudamasa who set up the game around the net and prevented the Chinese from playing at their customary pace. However, they were unable to maintain that sharpness as the match progressed and Huang and Zheng slowly but surely tightened the noose with big hitting. The 20-22 21-12 21-18 victory helped China regain the trophy after losing it last year to Korea.

“Indonesia had a chance in the Mixed Doubles; it was quite tough,” he said. “Our weakest link is the Women’s Singles. I’m quite happy with the way our players performed.” Indonesia (below) lost in last year’s final too.

* Other matches on the day featured India’s 3-0 victory over Russia and Philippines’ 3-2 margin over Spain, both in the 13-16 play-offs. Canada and England scored 3-0 victories over USA and Netherlands respectively in the play-offs for 17-20 positions.