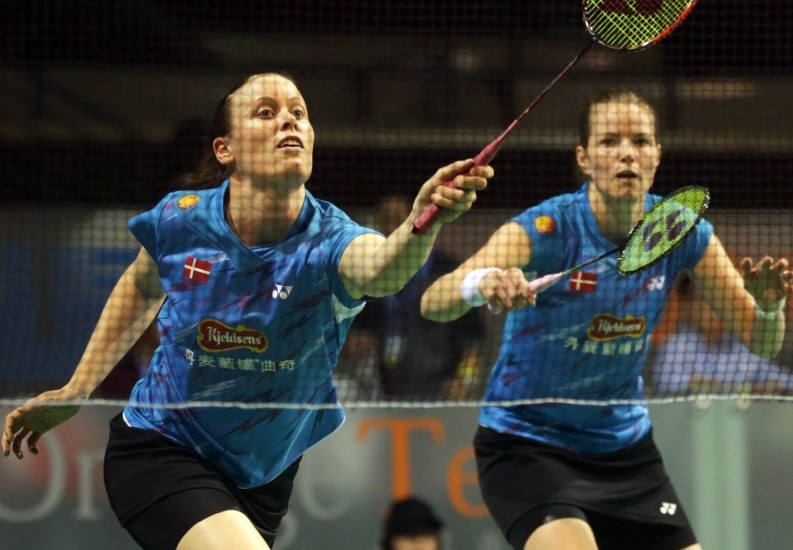 Two points from defeat, world No. 1 Li Xuerui clawed into the quarter-finals of the OUE Singapore Open today at the expense of Japan’s Minatsu Mitani. Recovering from a first-game loss and 15-19 down in the second game, China’s ace Women’s Singles player roared home in the third game for an inspiring 17-21 21-19 21-12 win. Hoping to go one better than last weekend’s runner-up finish in the Yonex-Sunrise India Open, Li found herself in deep trouble with a straight-games, second-round exit hovering over her but, as the resilient Olympic champion has done so many times, she manoeuvred from the precipice of demise to a place among the last eight.

Now, with this morale-boosting result and in the absence of the season’s frontrunner and her compatriot Wang Shixian, Li (below; left) will look to make further inroads. However, she may have to do it the hard way as also progressing to the quarter-finals were her team-mate, Wang Yihan; Korea’s Sung Ji Hyun and Bae Yeon Ju; Thailand’s Ratchanok Intanon (below; right); Tai Tzu Ying of Chinese Taipei and India’s PV Sindhu (below; centre). The latter worsened Japan’s misery, beating Shizuka Uchida, 21-17 17-21 21-16, while Uchida’s team-mate, Eriko Hirose, could not repeat her giant-killing exploits, surrendering 21-16 21-14 to Han Li of China, having disposed of India’s Saina Nehwal in the first round.

Meanwhile, the form that swept Kim Ha Na and Jung Kyung Eun to the Women’s Doubles final in New Delhi deserted them as the Koreans were dismissed by Chinese twins, Luo Ying and Luo Yu. In a 47-minute rout, the blossoming pair brushed aside the opposition, 21-12 21-14, at Singapore Indoor Stadium. They were joined in the quarter-finals by the high-flying Bao Yixin/Tang Jinhua – searching for their ninth title in 11 events – who advanced, 25-23 21-19, over

Chinese Taipei’s Cheng Wen Hsing/Hsieh Pei Chen. The losers would have been haunted by the memories of squandering the opening game despite leading 20-16. They also fought back from 13-18 down in the second to level matters 18-all but couldn’t force a decider. Top seeds Christinna Pedersen/Kamilla Rytter Juhl (Denmark; BWF home page); Greysia Polii/Nitya Krishinda Maheswari (Indonesia) and the two Japanese pairings of Misaki Matsutomo/Ayaka Takahashi and Reika Kakiiwa/Miyuki Maeda are also in with title shots.

* India’s Kidambi Srikanth derailed Nguyen Tien Minh in Men’s Singles, ousting Vietnam’s top competitor, 18-21 21-15 21-8. The veteran’s form seemed to deteriorate as the match wore on and Srikanth had it mostly his own way by the third game. His compatriot, Sai Praneeth, also enjoyed a successful outing versus local campaigner, Derek Wong (right); 24-22 21-19. Players of seven nationalities, led by world No. 1 Lee Chong Wei of Malaysia, are vying for honours in this category.

* Top seeds and Men’s Doubles world No. 1 pair, Mohammad Ahsan and Hendra Setiawan, returned to action following their All England triumph with a comfortable 21-17 24-22 win. The Indonesians overcame India’s Alwin Francis/Arun Vishnu but fate was not so kind to the No. 2 seeds Hiroyuki Endo/Kenichi Hayakawa who added to Japan’s woes, perishing 21-14 10-21 21-19 in a hard-fought battle against China’s Chai Baio/Hong Wei. * Goh Liu Ying’s Mixed Doubles comeback for Malaysia was short lived as she and Chan Peng Soon succumbed 21-17 12-21 21-12 to Liu Cheng/Bao Yixin of China. The category is headlined by top seeds Tontowi Ahmad/Liliyana Natsir (Indonesia; above) and No. 2 seeds Xu Chen/Ma Jin of China while others such as Korean pairs – Yoo Yeon Seong/Jang Ye Na and Ko Sung Hyun/Kim Ha Na – will fancy their chances.