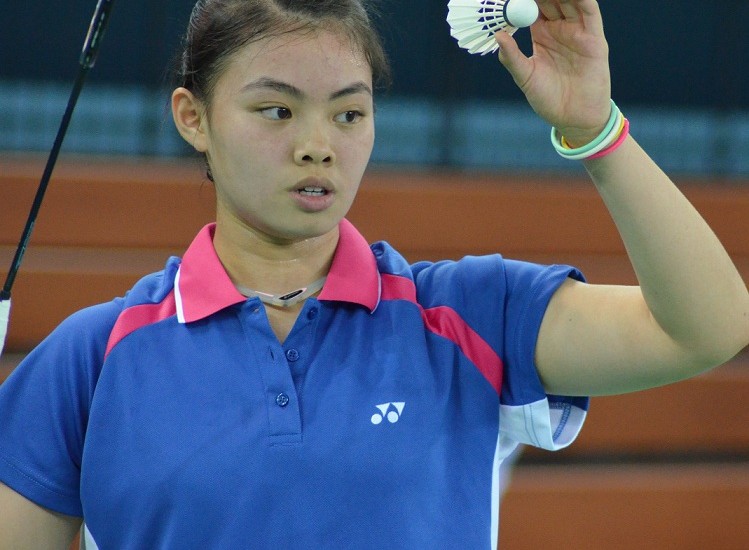 Korea were blanked 3-0 by Thailand in the Group W play-off (effectively a quarter-final) on a day that saw some surprise results. Thailand progressed to the semi-final where they take on Indonesia. The other semi-final pits Japan against China. Akane Yamaguchi was easily the favourite going into the match, but Lee surprised her. Lee forced Yamaguchi to chase the shuttle all match long, using her deft touch at the net and crisp shots on the flanks to dent Yamaguchi’s confidence. On a number of occasions she caught Yamaguchi on the wrong foot with her delayed shots and drives to her opponent’s backhand corner. Yamaguchi walked away in tears even as Wakana Nagahara and Shida Chiharu (above) were left with the task of saving Japan’s campaign against Chang Hsin Tien/Chang Ching Hui. The Japanese Women’s Doubles team overcame early hiccups before posting a 16-21 21-16 21-10 result.

In the Group Z play-off (quarter-final), Malaysia stretched China but hopes of an upset evaporated in the fourth match (Women’s Singles), when Kisona Selvaduray suffered a leg injury in the first game against He Bingjiao. The first match (Mixed Doubles) went China’s way as Huang Kaixiang/Chen Qingchen made quick work of Tan Jinn Hwa/Goh Yea Ching, 21-8 21-17.

The second match was the most absorbing of the day. The tall and lithe Lin Guipu of China used his aggressive game to good effect against Cheam June Wei as he won a close first game. Once Cheam had settled down, however, the match turned perceptibly. The Malaysian played patiently and showed maturity in waiting for the opportune moment to strike. Leading 20-15 in the third game, Cheam appeared an easy winner but some nervous errors from the Malaysian saw Lin climb level and even hold match point. Fortunately for Cheam, he regained composure in time and came away in delight and relief with the 21-23 21-14 23-21 victory.

“I was nervous at 20-15,” admitted Cheam. “I’d prepared well for today and I controlled the game…I made few mistakes.”

If Malaysia harboured hopes of extending China, they were mistaken for China’s depth in talent became apparent – Men’s Doubles pair Huang Kaixiang/Zheng Siwei routed Tan Jinn Hwa/Goh Sze Fei, 21-8 21-12. An injury to Selvaduray left the Malaysians contemplating what might have been.

Meanwhile, Indonesia had a hard time quelling the challenge of Hong Kong, but they closed the contest in the first three matches. Jonathan Christie had his hands full against Hong Kong’s Lee Cheuk Yiu, clawing back from a deficit of 13-18 in the final game to win Men’s Singles. Ruseli Hartawan made it 2-0 for Indonesia with a straight-games result over Ng Tsz Yau in Women’s Singles before Clinton Hendrik Kudamasa/Muhammad Rian Ardianto survived a three-game test against Yonny Chung/Yeung Shing Choi.

* England and USA prevailed in close contests in the play-offs of Group Y and Z respectively. England staged a comeback from 0-2 down to get past France, while USA edged past Australia. Armenia took a match off Egypt (1-3) in Group Y, but Mongolia, Uzbekistan and Czech Republic could not do the same against South Africa (Group W), Slovenia (Group Z) and Sri Lanka (Group X) respectively.