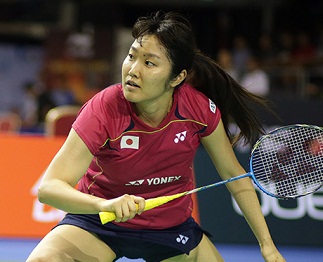 Fifth seeds Ma Jin and Wang Xiaoli were upset in the first round of Women’s Doubles at the OUE Singapore Open 2014 today. China’s Ma and Wang, who reunited recently after prolonged and successful stints with other partners, ran into the in-form Korean pair Jung Kyun Eun/Kim Ha Na (below), who were runners-up at last week’s Yonex-Sunrise India Open. The 17-21 21-17 21-17 victory will see the Koreans take on another Chinese pair, Luo Ying/Luo Yu, in the second round. There were no surprises for the most part in the category but Jung/Kim’s compatriots and fourth seeds Jang Ye Na/Kim So Young failed to advance, losing 21-19 21-18 to Singapore’s Yao Lie/Shinta Mulia Sari.

Men’s Singles threw up a few surprises. Swiss Open champion Viktor Axelsen of Denmark blew a big lead against Hong Kong’s Wong Wing Ki (left), who clambered from 9-18 down in the third game to take the match. Axelsen saw his lead melt away, saved one match point and had the opportunity to close the issue at 22-21, but Wong completed his Houdini act on his second match point: 16-21 21-13 24-22.

Axelsen’s compatriot Hans-Kristian Vittinghus has had strong performances coming into the Singapore Open, but he ran into local hope Derek Wong and could not turn the tide in the third game. The 21-16 16-21 21-16 result means Wong will take on India’s Sai Praneeth.

Qualifier Simon Santoso, fresh from his Malaysia GPG victory late last month, showed he could still match the best of the young prospects. The Indonesian dismissed China’s Tian Houwei 21-14 21-17 to set up a second round contest with Hsu Jen Jao of Chinese Taipei. India’s Kashyap Parupalli was outlasted in a long match by Korea’s Lee Dong Keun. Parupalli had his nose in front at the closing stages, but Lee nailed five of the last six points and left the Indian ruing his missed chances.

Eighth seed Kento Momota of Japan was also beaten, 21-17 21-16, by Thailand’s Tanongsak Saensomboonsuk in a battle of left-handers. * From champion in 2010 to first-round loser in 2014 – Saina Nehwal could not have helped but wonder at the vicissitudes of sport as she was outgunned by a player five years her senior. Japan’s Eriko Hirose (BWF home page) continued to impress despite being one of the oldest players on the Superseries circuit – scoring a 16-21 21-15 21-11 victory over the Indian. Another unexpected loser was Thailand’s Porntip Buranaprasertsuk at the hands of Indonesian qualifier Adriyanti Firdasari: 21-15 21-17.