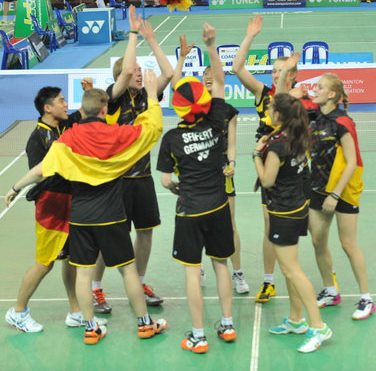 Germany held off Sri Lanka in a thriller as the JATI BWF World Junior Mixed Team Championships 2014 for the Suhandinata Cup started yesterday.

The teams were level at 2-2 in Group X1 and the tie hinged on the last Mixed Doubles match between Max Weisskirchen/Eva Janssens (Germany; below) and Buwenaka Goonethilleke/Hendahewa Thilini Promodika. The Sri Lankans won a close first game from 19-all, but Germany (featured image; celebrating) stormed back level and gained the decisive advantage in the third game after the pairs were tied at 13-all. The 19-21 21-10 21-15 victory marked Germany’s second thrilling win of the day after they had scripted a similar 3-2 triumph over Canada. Yvonne Li and Luise Heim had ensured Germany victory in the fifth match (Women’s Doubles), outplaying Takeisha Wang and Joanne Chen of Canada, 21-17 17-21 21-12.

Meanwhile, defending champions Korea had it easy over Botswana, 5-0 in Group W1, while last year’s runners-up Indonesia were untroubled by the teams that had run Germany close. Indonesia blanked both Sri Lanka and Canada 5-0. The France versus Spain tie was among the most thrilling of the day. Spain staged a stunning comeback from 0-2 down, winning the three remaining matches in three games. Spain had earlier been whitewashed 0-5 by a strong Japanese squad and struggled to get going against France. Javier Suarez/Isabel Fernandez were packed off 21-9 21-8 in 17 minutes by France’s Alexandre Hammer/Delphine Delrue in the opening Mixed Doubles encounter and Spain went 0-2 down despite the resistance of Enrique Peñalver to Frenchman Tanguy Citron (21-14 19-21 21-17) in Men’s Singles.

Clara Azurmendi began the fightback by beating Yaelle Hoyaux 21-12 20-22 21-10 in Women’s Singles and Spain made it 2-2 when Enrique Peñalver/Javier Suarez overcame a mid-match revival from Tanguy Citron/Thomas Vallez to win 21-18 21-23 21-13 (Men’s Doubles). It came down to the final Women’s Doubles match and Clara Azurmendi/Isabel Fernandez completed their team’s stunning victory by holding off Lole Courtois/Delphine Delrue, 21-18 17-21 21-18.

Groups Y2 and Z2 were reduced to contests among four teams each as Afghanistan (Y2) and Zambia (Z2) withdrew. Group Z2 saw a close battle between India and Australia. The first match set the tone for the tie when Daniel Guda/Khoo Lee-Yen edged past India’s Kuhoo Garg/Chirag Sen, 21-11 13-21 22-20 (Mixed Doubles). However, Ruthvika Shivani and Harsheel Dani won their Women’s Singles and Men’s Singles matches respectively to give India the lead. Khoo Lee-Yen again stepped up to deliver by winning Women’s Doubles with Joy Lai against Reshma Kartik/Vaishnavi Iyer. Aware the fate of the tie was in the balance, Arjun MR and Chirag Shetty took just 20 minutes to breeze past Anthony Joe/Simon Leung 21-14 21-13 and seal the issue for India.

The group matches finish today and the play-offs start tomorrow.