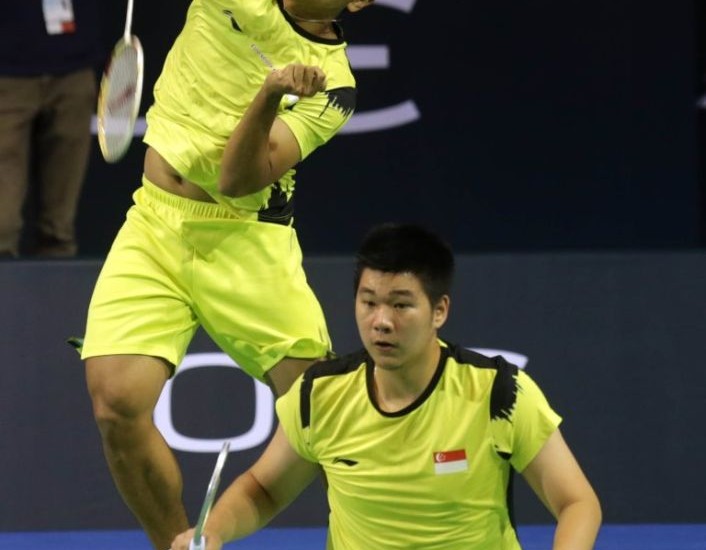 Chrisnanta and Triyachart (BWF home page), who won the Malaysia Grand Prix Gold just over a week ago, breezed past both their qualifying round opponents in straight games. A 21-16 21-15 defeat of Haw Yong Yuan/Kong Keat Zhen (Malaysia) was followed by an identical decimation of Saputra Albert/Yonathan Suryatama Dasuki of Indonesia, 21-15 21-15. Chrisnanta/Triyachart were joined in the main draw by compatriots Yong Zhao Ashton Chen/Robin Gonansa, who also enjoyed straight-games victories in their qualifying round matches. Chinese Taipei’s Liao Min Chun/Tseng Min Hao and Hong Kong’s Chun Man Tang/Law Cheuk Him were the other qualifiers.

Triyachart also qualified in Mixed Doubles with Yao Lei. An upset was seen in this category, with Singapore’s Yong Kai Terry Hee and Fu Mingtian, ranked No. 104, prevailing over Indonesia’s Praveen Jordan/Debby Susanto, 17-21 21-11 21-17. The other qualifiers were Soren Gravholt/Kamilla Rytter Juhl of Denmark (above) and Muhammad Rijal/Vita Marissa. Thailand clinched their places without much trouble. Sitthikom was the only player to be extended to three games, by Loh Kean Yew of Singapore, with the Thai proving superior: 21-17 19-21 21-13.

The tireless Lee Chong Wei returns six years after he last participated in – and won – the Singapore Open. The Malaysian is overwhelming favourite to add to his glittering collection of Superseries titles as he is in red-hot form. Lee has won three Superseries titles this year, in the process regaining the edge over his formidable rival Chen Long of China.

Despite the absence of Chen Long, the Men’s Singles draw looks healthy. Not many would bet on Wei Nan when the world No. 43 takes on Lee in the opening round but Wei can be dangerous on his day. At his last Superseries, the Malaysia Open 2014, he nearly pulled the rug from under Chen Long, losing 24-22 in the third game. The tall Hong Kong player will also have the element of surprise in his favour since Lee has never faced him.

Others in Lee’s half who will fancy their chances of getting far are China’s Chen Yuekun, Japan’s Kento Momota and Denmark’s Viktor Axelsen. Veteran Nguyen Tien Minh of Vietnam and India’s K Srikanth are others who could run into Lee.

The bottom half has three Chinese and of them Tian Houwei and Du Pengyu are strong contenders to make the final. Tian was a finalist at the recent Swiss Open, and is the only player in recent times, apart from compatriots Chen Long, Du Pengyu and Lin Dan and Japan’s Kenichi Tago, to beat the world No.1. India’s Kashyap Parupalli, Korea’s Son Wan Ho, and Denmark’s Hans-Kristian Vittinghus have an equal chance of featuring in the business end of the tournament.

In Women’s Singles, a final between the top two seeds – China’s Li Xuerui and Wang Yihan – looks nearly inevitable, especially as their in-form compatriot Wang Shixian has skipped this event. Li should have a comfortable run until the quarter-finals where Chinese Taipei’s Tai Tzu Ying might pose her some problems. Thailand’s Porntip Buranaprasertsuk, Nichaon Jindapon and Korea’s Sung Ji Hyun are the others to watch.

Wang’s toughest test could come in the quarter-finals against likely opponent PV Sindhu of India. Perhaps the strongest candidate to prevent the expected Wang-Li final would be World champion Ratchanok Intanon of Thailand, although she has a poor record against Wang, having lost all their eight encounters. India’s Saina Nehwal, once a strong challenger to Chinese domination, has been a shadow of herself in recent times and she will hope that her memories of winning this event in 2010 will propel her resurgence. * In Men’s Doubles two new partnerships, both consisting of veterans matched with youngsters, are likely to evoke interest as they face each other in the first round. China’s legendary Cai Yun partners Kai Lu, while Malaysia’s Tan Boon Heong takes court with Ow Yao Han.

* In Mixed Doubles, Malaysian Goh Liu Ying’s return from a lay-off will be watched with keen interest as she reunites with her regular partner, Chan Peng Soon.