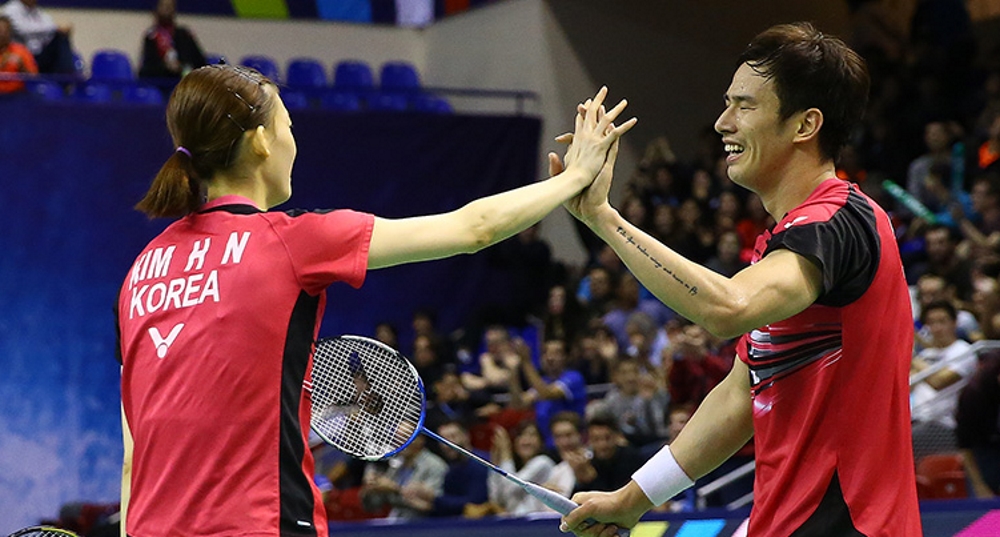 The Mixed Doubles World champions, who have won every match at the India Open since 2011, were ambushed in the semi-finals of the 2014 edition by Ko Sung Hyun and Kim Ha Na of Korea (featured image), 22-20 21-18. The victory owed much to Ko’s indefatigable energy from the back-court, relentless pursuit of the shuttle and calm defence to his opposite number Ahmad’s smashes. In fact, so confident did Ko seem that he sported a smile throughout the match, even during the final moments of both games.

The Indonesians were guilty of playing loosely and without much focus at times. Natsir in particular was uncharacteristically erratic at the net, allowing Kim Ha Na to dominate those exchanges. The Koreans led for the most part, helped by Ko’s inspirational display. Ahmad and Natsir appeared increasingly off-colour in the second game, even letting some serves fall unreturned.

For Ko and Kim, it was ironically a case of what a difference a year makes as they were the losing finalists last year as the Indonesians celebrated a hat-trick of India Open titles. Tomorrow, they have a chance to rectify that, a still-beaming Ko noted. “Yes, we have a chance to win if we play well,” he said. They face the Danish duo of Joachim Fischer Nielsen and Christinna Pedersen (above) who rebounded superbly from a game down to oust Olympic champions, Zhang Nan/Zhao Yunlei, 14-21 21-6 21-18.

“It’s always tough against them and many times it goes to three games so we were confident we could come back. In the second and third games we stepped forward and attacked. That’s so important because, when we play slower, they get control,” noted Pedersen, who has a score to settle with Kim having lost out to her in today’s Women’s Doubles semi-final.

However, Kim might argue that she and Ko are the ones out for revenge having perished agonisingly in their last battle versus the Danes. In an unforgettable encounter at last year’s Yonex Denmark Open, the Koreans squandered ten match points in the quarter-finals as Fischer Nielsen and Pedersen rode a wave of home support to an unlikely triumph – 30-29 in the third game after being 15-20 down!

“They have good tactics but we will give everything we have to win the title,” declared Pedersen.

The match of the day, though, was Jan O Jorgensen’s spirited resistance to China’s world No. 2 Chen Long (left). The match was poised on a fine edge throughout, before it ultimately went Chen’s way, 21-15 21-23 21-19.

Jorgensen played a smart match. He played patiently, waited for his chances and, when presented with an opportunity, attacked fiercely. His defence was outstanding as he returned a number of Chen’s missiles, while his own smashes were precisely aimed at the lines. The match see-sawed and when Jorgensen overcame a deficit in the second game to take the match to a decider, it was apparent that it would go down the wire.

Eventually, it was the brief moments of indecision that hurt Jorgensen. On one occasion, with Chen out of position and presented with an opportunity to kill the shuttle, the Dane chose to let it fall, and the drift carried it well within the sideline. Towards the closing stages he gifted Chen with a couple of points that undid all his good work through the 79 minutes of the match.

Defending champion Lee Chong Wei (above) blew a comfortable position in his semi-final against China’s Du Pengyu. Leading by a game and 8-1 and toying at times with his opponent, Lee appeared to lose focus as he hit a number of shots into the net or wide of the sidelines, helping Du take the match to a third game. The world No. 1 regrouped and finished the match 21-17 19-21 21-14 to enter his fourth successive India Open final. * Experience and youth combined to help China’s Yu Yang/Tang Yuanting (above) beat compatriots Ma Jin/Wang Xiaoli in Women’s Doubles. Interestingly, the same players had featured in last month’s Yonex All England final but as different pairs. Regular partners and world No. 1 duo, Yu Yang and Wang Xiaoli, had beaten the new combo of Ma Jin and Tang Yuanting. The 21-16 21-19 outcome ensured Yu/Tang a place against Korea’s Jung Kyung Eun/Kim Ha Na, who disposed of the * In Women’s Singles, top seed Li Xuerui took just 32 minutes to brush aside Chinese compatriot Liu Xin, 21-12 21-13, but the other semi-final was a hard-fought contest. All England champion Wang Shixian (left) outplayed compatriot Wang Yihan, improving her career head-to-head record to 4-9. The third game was tight from midway, with just a point separating the two, but Shixian always kept the lead and sealed the contest, 15-21 21-7 22-20, on her second match point.

* Qiu Zihan and Liu Xiaolong’s fortunes enjoyed an upswing after a year as they entered their first Superseries final since winning the India Open in 2013. The defending champions from China (below), who have had a disappointing season so far, made the final with a come-from-behind win over top seeds Hiroyuki Endo/Kenichi Hayakawa of Japan, 21-19 21-19. Qiu/Liu were 12-18 and 7-12 in arrears in the first and second games respectively, before surging home. They face Denmark’s Mathias Boe/Carsten Mogensen, who dismissed Thailand’s Maneepong Jongjit/Nipitphon Puangpuapech in the other semi-final, as they cruised to a 21-15 21-15 victory.