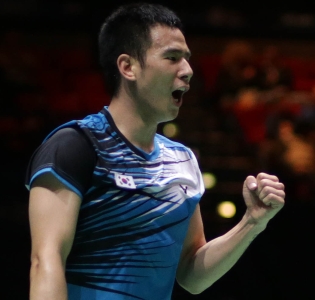 Korea’s Ko Sung Hyun was the star of today’s action at the Yonex All England 2014, entering the semi-finals of both his events.

Ko (featured image) was pushed to the limit in both his quarter-final matches, but he found the resources to ensure victory. He and Kim Ha Na faced the towering attack of Mads Pieler Kolding/Kamilla Rytter Juhl. The Danes had earlier disposed of fourth seeds and compatriots Joachim Fischer Nielsen/Christinna Pedersen. The Koreans were taken the distance in the nearly hour-long Mixed Doubles encounter but prevailed 21-15 19-21 21-13. A couple hours later, Ko was back on court for his Men’s Doubles match with Shin Baek Choel, and yet again had to fight back after the loss of the second game to Lee Sheng Mu/Tsai Chia Hsin. The Chinese Taipei pair fought for 54 minutes before Ko/Shin emerged triumphant 21-17 19-21 21-14.

The first two days had seen a few upsets but there were no shocks in the quarter-finals. Most of the favoured players got through despite being in difficulty. In Men’s Singles, second seed Chen Long was caught in his second three-set match, this time against Denmark’s Hans-Kristian Vittinghus, who stretched the contest for a marathon 78 minutes before the Chinese got the better of him, 18-21 21-11 21-14. Chen’s compatriot Wang Zhengming (left) too needed three games to fight past Korea’s Lee Dong Keun, 21-13 16-21 21-17, in an even longer match. The only upset of the day was fifth seed Kenichi Tago; the Japanese was felled by Korea’s Son Wan Ho in a surprisingly one-sided affair, 21-15 21-17. Meanwhile, top seed Lee Chong Wei spent the least energy among all the quarter-finalists as he outclassed Japanese prodigy Kento Momota, 21-14 21-18.

After their stunning victory over favourites Bao Yixin/Tang Jinhua in the second round of Women’s Doubles, Japan’s Miyuki Maeda/Reika Kakiiwa were expected to pose some problems to Olympic champions Tian Qing/Zhao Yunlei. Maeda and Kakiiwa continued with the same momentum as they engaged the Chinese pair in a stiff contest, and even had game point in the first. However, once Tian/Zhao had saved that, they stepped up their game and the Japanese’s challenge fell away midway through the second after an hour, 22-20 21-15.

The strength of the Chinese in Women’s Doubles was apparent as three pairs made it to the last four. Apart from Tian/Zhao, World champions Yu Yang/Wang Xiaoli and qualifiers Ma Jin/Tang Yuanting sealed their places. The exceptions were Japan’s Ayaka Takahashi/Misaki Matsutomo (above), who survived a 16-21 21-9 21-18 battle against Indonesia’s Pia Zebadiah Bernadeth/Rizki Amelia Pradipta.

* Women’s Singles too was dominated by China, with their top three ensuring semi-final places. Li Xuerui, Wang Yihan and Wang Shixian beat their opponents Sung Ji Hyun, Bae Yeon Ju (both Korea) and Saina Nehwal (India) in straight games. Challenging China for the crown will be Thailand’s Ratchanok Intanon (left). The World champion prevailed over surprise quarter-finalist Michelle Li of Canada, 23-21 21-16. Intanon takes on Li, while the other semi-final is a clash of the two Wangs.

* Mixed Doubles will see familiar names in the semi-finals. The top half features an all-China clash, with Xu Chen/Ma Jin the underdogs against top seeds Zhang Nan/Zhao Yunlei. Xu and Ma have a 2-15 record against Zhang/Zhao, with their last victory coming in September 2011. Both the Chinese pairs had straight-sets victories – Zhang/Zhao over England’s Chris and Gabrielle Adcock (21-10 21-13) and Xu/Ma over Japan’s Kenichi Hayakawa/Misaki Matsutomo (21-11 21-16). World champions Tontowi Ahmad/Liliyana Natsir take on Ko Sung Hyun/Kim Ha Na in the other semi-final.