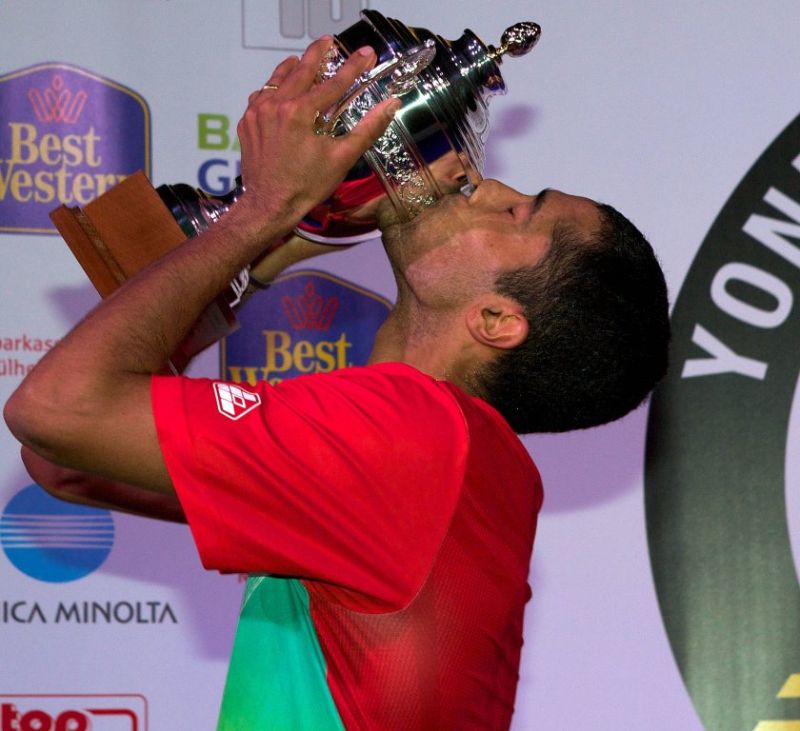 India’s Arvind Bhat exceeded all expectations yesterday – including his own; capturing the Yonex German Open 2014 for the biggest win of his career. His success over No. 25 Hans-Kristian Vittinghus of Denmark maintained the day’s notable trend of upsets, with only Women’s Doubles combo, Misaki Matsutomo and Ayaka Takahashi, justifying their top billing by avoiding the on-court jinx. Their opening victory over Korean rivals sparked a great campaign for Japan which also wrested the Women’s Singles and Men’s Doubles titles in the first three finals to be played. Sayaka Takahashi (left) followed her sister’s lead, getting the better of favourite Sung Ji Hyun of Korea in the Women’s Singles showdown while Takeshi Kamura/Keigo Sonoda prevailed in an all-Japan battle for Men’s Doubles supremacy.

Bhat’s result was the most surprising as the 34-year-old seemed past his prime and facing a new generation of shuttlers from India. Bhat, who trains with a few state players, admitted he hadn’t expected to advance beyond the second round. Once the No. 87 beat Hong Kong’s Hu Yun in the second round, he struck form, downing Malaysia’s Daren Liew (third round), Denmark’s Viktor Axelsen (quarter-final) and Chinese Taipei’s Chou Tien Chen (semi-finals). He finished with a flourish, celebrating a 24-22 19-21 21-11 victory over Vittinghus (12) in a dramatic and fitting conclusion to the tournament.

He saved four game points to grab the first game and appeared to be coasting 17-12 in the second. However, he lost focus and Vittinghus capitalised, seizing eight of the next nine points but, at 20-18, the Dane doubled up with an apparent back injury. Although he clinched the game, he was outclassed by Bhat (featured image) in the third.

“At 17-12 in the second game, I lost focus and started thinking of my victory celebrations,” admitted the veteran, who regained composure to accomplish his mission.

One of the factors that inspired his performance was the birth of his son a few months ago. “He has made a big difference,” said Bhat. “I couldn’t sleep the night before the final. I kept thinking of him. When I carry him, I feel very calm because children are so innocent.”

The Takahashi household had much to celebrate, with siblings Ayaka and Sayaka both reaching the top of the podium. Women’s Singles No. 13 Sayaka Takahashi won her first title since the Australian GP Gold last April, ousting top seed Sung Ji Hyun (Korea), 21-17 8-21 21-12.

Takahashi, who pulled off a narrow semi-final win in a three-game thriller over Carolina Marin of Spain, said she focused on playing long rallies and avoiding mistakes. “Last year, I lost in the semi-finals, so I had strong intent to win this match. It was like a revenge match. I’m very happy. Sung Ji Hyun beat me at the Korea Open earlier this year, so there wasn’t much pressure on me.”

* Earlier, Ayaka Takahashi and Misaki Matsutomo (above) held off a strong challenge in Women’s Doubles from second seeds Jung Kyung Eun/Kim Ha Na of Korea, 23-21 24-22. The Japanese had a comfortable lead in the first game but Jung/Kim nearly pocketed it after saving four game points. The second game was close and the Japanese again had to save game point before converting their third match point.

* World No. 15 Men’s Doubles pair Takeshi Kamura/Keigo Sonoda (left) surprised their No. 3-ranked compatriots Hiroyuki Endo/Kenichi Hayakawa 21-19 14-21 21-14. For Endo and Hayakawa, the final was their third straight match over 50 minutes while the victors had a comparatively easier path.

“It was a tough game to start with as the conditions were slower than yesterday,” said Blair, who was German Open champion in 2011 (with Gabrielle White). “The Koreans made us work hard. I always look forward to playing here. I always seem to have good luck. It feels like a second home.”