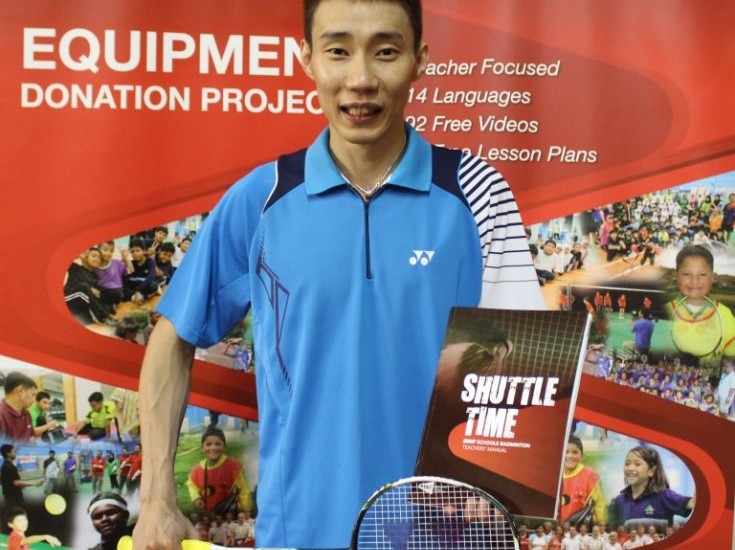 World No. 1 Lee Chong Wei has become the first player to contribute to the new BWF Equipment Donation Project.

The Men’s Singles superstar (featured image) endorsed the Badminton World Federation (BWF) initiative, handing over some equipment to the world-governing organisation in Kuala Lumpur, Malaysia, recently. His and other donations will benefit children worldwide, giving them the opportunity to experience the joy of playing badminton through BWF’s Shuttle Time programme.

“We have initiated this project to encourage the public to donate badminton rackets and other equipment which they may not be using anymore but which are still in good condition.

“All the rackets, shuttles, etc. we collect through the Equipment Donation Project will be sent to schools in lesser developed countries to deliver badminton to children. It’s another aspect of Shuttle Time – our grassroots development programme which is focused on schools,” explained BWF Secretary General, Thomas Lund. “We want to make badminton the No. 1 schools’ sport and this will help our efforts.”

Starting with the upcoming Yonex All England Open Badminton Championships, there will be Equipment Donation booths at various BWF World Superseries and Grand Prix Gold tournaments at which players, fans and even equipment suppliers can drop off their contributions.

Apart from giving some of their own equipment, elite players are also being asked to support this worthy venture with brief promos stating the following slogan: “Giving Every Child a Chance to Play. Donate Equipment Today.”

Lee Chong Wei’s team-mate, Koo Kien Keat (left), was the first to do so; offering his backing to the project.

Get involved in Shuttle Time at the Yonex All England Open