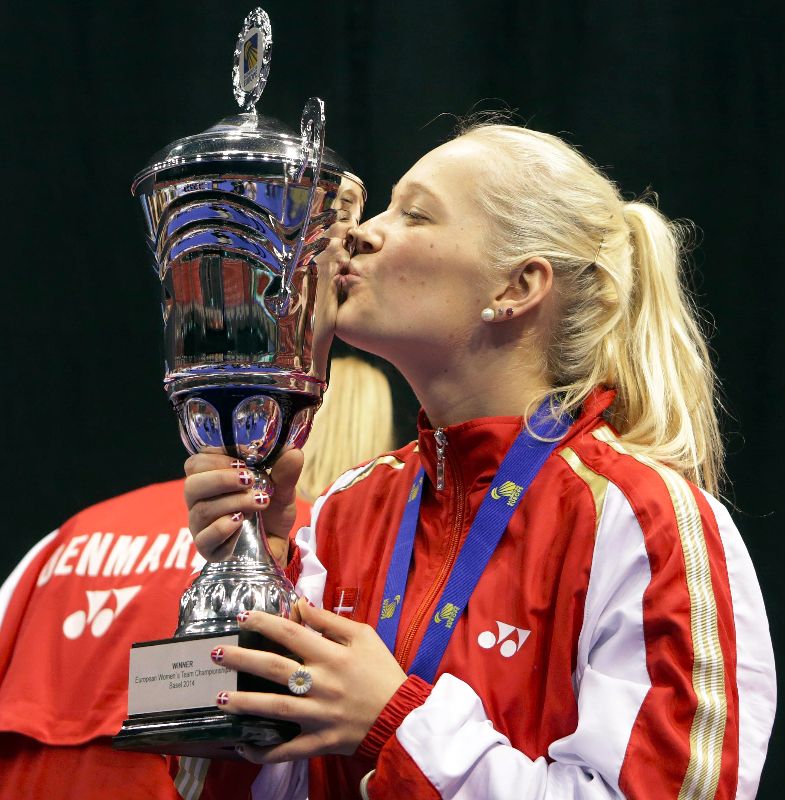 Denmark’s men (below) thus kept the title that they won the last four times, while the women reclaimed the championships they lost in 2012.

Neither England in the men’s, nor Russia in the women’s, came close to upsetting Denmark, who were fielding a mostly young squad. Rajiv Ouseph struck the first blow for England in the men’s final, with a surprisingly one-sided victory over Hans-Kristian Vittinghus (21-13 21-16), but England could not do further damage. Experienced Men’s Doubles duo Mathias Boe/Carsten Mogensen were stretched by Chris Adcock/Andrew Ellis, and after a fairly even battle until mid-way in the third game, Boe and Mogensen pulled away to register a 21-17 19-21 21-14 victory.

The Danish women (below) were even more impressive as they whitewashed Russia 3-0. World No.2 Women’s Doubles pair Christinna Pedersen/Kamilla Rytter Juhl was not even required on court as the young Women’s Singles trio of Line Kjaersfeldt, Sandra-Maria Jensen and Mia Blichfeldt authored a rout.

Kjaersfeldt took 31 minutes to overcome Natalia Perminova, 21-17 21-14. “I have had a good week here in Basel and I have enjoyed it very much. I knew how important it was to win the first point and I am happy I did it for my team,” Kjaersfeldt told BadmintonEurope.com. * The most exciting of all the semi-finals contests was Russia’s 3-2 victory over defending champions Germany. Karin Schaase had given Germany the lead, beating Natalia Perminova 21-13 20-22 21-16. However, the lead swung Russia’s way when Ella Diehl and Anastasia Chervaykova clinched their singles matches over Olga Konon (21-19 9-21 2-0 retd) and Fabienne Deprez (25-23 21-19) respectively.

* Isabel Herttrich/Carla Nelte brought Germany back into the contest winning the Women’s Doubles over Olga Morozova/Nina Vislova, 21-16 18-21 21-18 in a 73-minute cliff-hanger. In the pivotal final Women’s Doubles, Ekanerina Bolotova/Anastasia Chervaykova held their nerve against the experienced duo of Birgit Michels/Johanna Goliszewski, 21-16 19-21 21-19 in a match that lasted 67 minutes, to bring a fitting end to an absorbing contest.

* In the men’s championships semi-finals, England got the better of 2012 finalists Germany, 3-1, while Denmark did not drop a match against Finland. After Rajiv Ouseph and Chris Adcock/Andrew Ellis had given England a 2-0 lead with victories over Marc Zwiebler and Michel Fuchs/Johannes Schoettler respectively, Dieter Domke pulled one back for Germany beating Toby Penty in straight games. Chris Langridge/Peter Mills survived a tenacious battle from Peter Kaesbauer/Ingo Kindervater, 19-21 21-17 21-18, to ensure victory for England.