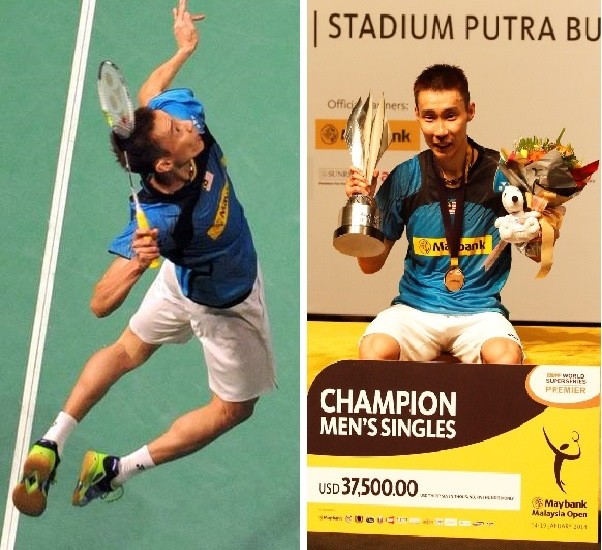 The national catchphrase “Malaysia Boleh!” echoed around the noisy Putra Stadium today as the hosts reigned in Men’s Doubles and Men’s Singles of the Maybank

The decibel level inside the arena steadily increased all afternoon as fans, energised by the prospect of a double dose of success on home court, embraced the inspiring slogan “Malaysia Can”; shouting, jumping, beating drums and blowing horns in anticipation of victory.

When it came – on the floodlit battleground before them – it was fittingly delivered by a combo of the young, in the form of Goh V Shem and Lim Khim Wah (below), and the evergreen – the irrepressible Lee Chong Wei (BWF home page); his tenth time a Superseries titlist on his native soil; his seventh in succession and his first with the Malaysia Open elevated to Superseries Premier status in the new MetLife BWF World Superseries.

What an incredible record!

Lee later dropped the news which has been speculated about for some time – that this could well be his last Malaysia Open as he is contemplating retirement at year-end.

“It is not easy to win ten titles,” said the 31-year-old, when asked about his emotional reaction after winning. “This year it was more important to win, because it was a Superseries Premier…I wanted to win ten titles. I was feeling the pressure in the first game, but after I won it, I felt relaxed. My shoulders feel relieved of the pressure now. “I will play the Commonwealth Games, World Championships and Asian Games and assess my condition after that. If I’m not in good condition, I will retire. I have a family now and I want to spend more time with them. I will try to perform my best this year.”

Lee has amassed a vast number of Superseries crowns but this was admittedly his most special. His opponent in the Men’s Singles final (left), Indonesia’s Tommy Sugiarto, has managed to take only one game off him in eight matches – in their first match back in 2007. Lee was an overwhelming favourite but Sugiarto led throughout the first game to 19-all. However, Lee did what he is so good at – turning on his explosive game to steal quick points. The second game was a mismatch as Sugiarto could barely extend each rally a few strokes. Lee leapt high time and again to smash past the Indonesian. The end came swiftly – 21-19 21-9 – with the legend sinking to his knees to absorb the crowd’s overwhelming ovation. Moments later, he was in daddy mode, hugging and kissing his baby son as his family congratulated him on his richly-deserved reward.

Earlier in the evening, exuberant Goh and Lim starred in Malaysia’s dream day, whipping spectators into a frenzy with a hard-fought 21-19 21-18 Men’s Doubles triumph over towering Chinese pair, Chai Biao and Hong Wei. Though it was their first Superseries final, the local duo showed no sign of nervousness and fed off the cheering throngs to turn their fortunes around from 4-10 in the second game.

Goh showed great composure in spotting spaces and firing winners while Lim was a livewire at net. The Malaysians (above: presentation ceremony) seized their first opportunity to take the match, triggering massive celebrations throughout the stadium.

“We never expected to be champions in our first Superseries final,” declared Lim. “The crowd’s support helped a lot. I could feel that our opponents were nervous at the end.” The latter event swung either way before going in favour of Xu Chen/Ma Jin (China, 4; right), 21-11 17-21 21-13 over defending champions Joachim Fischer Nielsen/Christinna Pedersen. The Danes struggled at the start to find rhythm, and although they recovered in the middle, the Chinese reasserted their dominance in the decider.

“We didn’t find the flair that we had yesterday,” rued Pedersen. “I was able to win at the net against Ma Jin in the second game, but in the third she came (to net) first and played harder.”

* The Women’s Doubles (below: presentation ceremony) final hung by a thread until the middle stages of the final game. China’s Bao Yixin and Tang Jinhua continued their dominance of the circuit, winning their seventh straight title; this time against Japan’s Misaki Matsutomo/Ayaka Takahashi, 21-19 14-21 21-13. Bao and Tang have been unbeaten since last year’s Dutch Open. Their opponents weren’t intimidated and the engrossing contest stretched over 81 minutes. The match was essentially a battle between the defence of Matsutomo and Takahashi and the attack of Bao/Tang. At times, the rallies lasted interminably, with neither team able to find the winner. The match turned decisively only midway in the third, with Matsutomo and Takahashi erring slightly. That was all the Chinese needed to pounce for their second crown in two weeks.

“This win was harder than the other six,” admitted Bao. “The standard of our opponents is getting higher and the advantage is not as great as it used to be for China.” * The Women’s Singles final did not live up to expectations. China’s Wang Shixian hasn’t found a way past compatriot Li Xuerui (below) in their last three matches and fell short yet again, 21-16 21-17. Wang was erratic in both games, failing to find the right length on her tosses, and spraying smashes wide. Wang was competitive only in phases, and never posed a threat to the top seed. “I feel lucky in Malaysia,” said Li, on winning her first Malaysia Open title. “I won the BWF World Superseries Finals here as well. Both of us played our game today, but I handled the critical points better.”