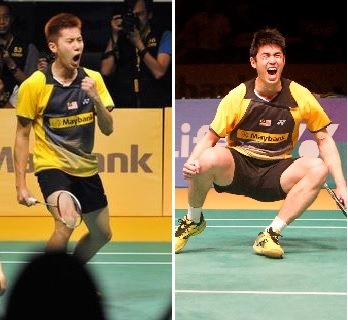 Frenzied fans lifted the roof off Putra Stadium today as young guns, Lim Khim Wah and Goh V Shem, gave a fiery performance that catapulted them into the Men’s

What an unexpected bonus for spectators who, with Men’s Singles great Lee Chong Wei duly booking his place in the final for a possible tenth title, now have every reason to pack the sports complex again tomorrow afternoon!

The Saturday crowd was a spectacle of boisterous rejoicing as Goh and Lim (BWF home page; left and right respectively) held their nerve in a tense three-setter over Indonesia’s Angga Pratama/Ryan Agung Saputra, 23-25 21-13 22-20, in the semi-final. Having improved over last year’s semi-final performance, they will hope to get past China’s twin towers – Chai Biao and Hong Wei – to claim a fairytale debut title on home turf; the first with the tournament as a Superseries Premier event.

A taste of what was to come unfolded in the first game as the two pairs were locked in a riveting battle. Pratama and Saputra saved two game points before going ahead on their third game point. The Malaysians stormed back winning the second comfortably, but the third game again had everyone on the edge of their seats. To their credit, Pratama and Saputra refused to buckle despite being three match points down, saving the third with brilliant defence against a series of smashes. It was the dynamo Lim who made the difference with his gutsy anticipation and touch at the net and when their opponents – worn down as much by the deafening atmosphere as by the Malaysians’ relentless tenacity – finally succumbed, an ear-splitting roar erupted in the stadium. Lim fell to the carpet in relief while Goh punched the air excitedly.

“The plan was to win points within the first three shots, because they would have the advantage in the longer rallies,” revealed Goh. “The crowd definitely helped. We were a bit scared at 20-17 and couldn’t close it out.”

Meanwhile, Men’s Singles top seed Lee Chong stayed on track for an unprecedented tenth title. Lee was on court for less time than anticipated as rival Jan O Jorgensen of Denmark retired early in the second game with a pulled muscle, with Lee leading 21-13 3-0. It was obvious early on that Jorgensen wasn’t moving well and he kept nursing his right thigh. He received medical attention after the first game but conceded soon after (below; left).

“I don’t know how it happened,” said Jorgensen. “I couldn’t stand on my right leg. I felt it a little bit during the last few rallies yesterday. It wasn’t a cramp, but more like a muscle pull. I was sick after the BWF Superseries Finals and I’ve trained for just five days. It’s my body speaking for itself.”

On the verge of his seventh straight title at his home Superseries event, Lee sounded cautious about his opponent in the final, Tommy Sugiarto (above; right), although the Indonesian hasn’t beaten him in eight matches. “I have to prepare for a tough match,” said Lee. “He looked strong in his semi-final against (Kenichi) Tago. I can’t expect him to be the same opponent I beat at the BWF World Superseries Finals.” Sugiarto was impressive as he made quick work of Japan’s Kenichi Tago, 21-13 21-18. The match did not rise to expectations. Tago appeared bothered by a freak shuttle strike to his face in the first game, and did not employ the resources that served him so well in his quarter-final victory over second seed Chen Long of China.

“Tago played better at the Superseries Finals,” Sugiarto said. “Perhaps because of the incident today, I sensed that he was angry and upset and that affected his performance. I don’t feel too good about it either because we are friends.”

* In Mixed Doubles, Xu Chen/Ma Jin (China, 4) outsmarted World champions Tontowi Ahmad/Liliyana Natsir for the eighth time in 13 matches. Xu and Ma were so dominant they did not even have to turn on their ‘A’ game, being content to play softly around the net and knock the shuttle into empty spaces.

In the other semi-final, China’s Olympic champions Zhang Nan/Zhao Yunlei had no answer for Denmark’s Joachim Fischer Nielsen/ Christinna Pedersen. Just as in their last game at the BWF World Superseries Finals, Zhang and Zhao were so beset by self-doubt that they committed several unforced errors. As Fischer/Pedersen gained in confidence, the Chinese appeared more and more deflated. “There’s a lot of wind in the arena and, with the faster shuttles, it’s important to move forward,” said Pedersen. “We’re really happy with the way we got them under pressure from the beginning.” * The top two seeds in Women’s Singles, both from China, made the final without any fuss. Li Xuerui (1) prevailed over young compatriot Yao Xue in 25 minutes, 21-17 21-8, while 2011 champion Wang Shixian (2) fought off a late challenge from Bae Yeon Ju (Korea, 6), 21-9 21-16. Li (above) has the opportunity to win her first Malaysia Open, while Wang will have to reverse a streak of three straight losses to the top seed if she hopes to win the title.

* The summit clash in Women’s Doubles will feature China’s Bao Yixin/Tang Jinhua (5) against Japan’s Misaki Matsumoto/Ayaka Takahashi (3). Bao/Tang breezed past Christinna Pedersen/Kamilla Rytter Juhl (Denmark), 21-13 21-11 and are one win away from a seventh straight title. Matsumoto/Takahashi (below) survived an 86-minute battle against compatriots Reika Kakiiwa/Miyuki Maeda, 23-25 21-15 21-13.