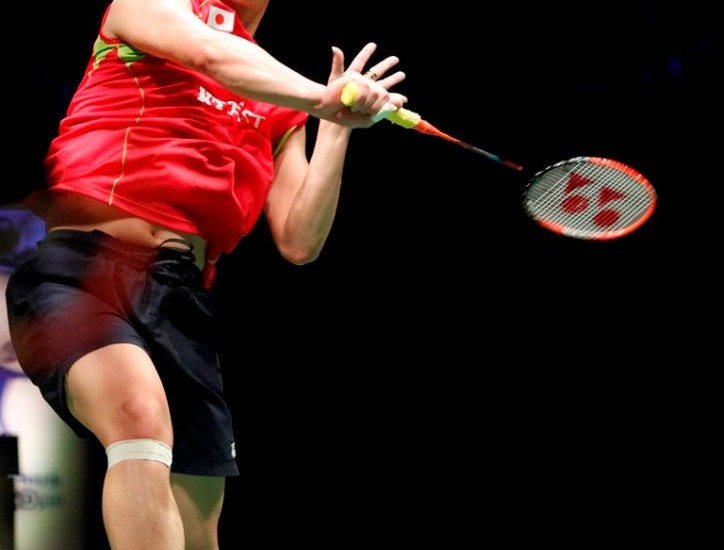 Tago (BFW home page) was the toast of the home fans at Putra Stadium. The crowd adopted him, tooting horns and urging him on with chants of “Tago, Tago”. The fifth seed rose to the occasion against the recent Korea Open champion. Chen, seen as the biggest threat to a tenth title for home hero Lee, had a 6-2 record over Tago, including three straight wins leading up to this event. However, the second-seeded Chinese hasn’t been at his best due to a fever and struggled in both his previous matches.

Aware of Chen’s less-than-perfect condition, Tago played fearlessly, attacking from deep in his court and extracting lift with tight netplay. Chen (right) was left behind in the third game as an inspired Tago displayed his full range of attacking shots.

“Chen Long was not 100 percent,” Tago conceded. “If both of us were at 100 percent, I would not have the confidence to beat him. I know it will be a tough match against (Tommy) Sugiarto tomorrow.”

Sugiarto had too many weapons for young Indian K Srikanth (21-10 21-15), while in other Men’s Singles action, Lee Chong Wei remained on course for his tenth title with a commanding performance over Chen’s compatriot Du Pengyu, 21-9 21-15. In the last match of the day, Japan’s fast-rising youngster Kento Momota stretched third seed Jan O Jorgensen (Denmark), but could not finish the job. Jorgensen prevailed 24-22 22-20 to earn an appointment with the nine-time champion. Interestingly, these semi-finals will be a repeat of last month’s semi-finals of the BWF World Superseries Finals.

Another young Japanese impressed too despite losing in the Women’s Singles quarter-finals. Schoolgirl Akane Yamaguchi gave a good account of herself but her inexperience was exploited by Korea’s Bae Yeon Ju (21-15 21-16), who will be the only non-Chinese in the semi-finals. Bae faces (left) No. 2 seed Wang Shixian, while the other half will see top seed Li Xuerui take on Yao Xue, who authored the only upset of the category with a surprisingly one-sided verdict over her senior and 2012 champion Wang Yihan, 21-17 21-17.

The most significant result in Men’s Doubles was the upset of Lee Yong Dae/Yoo Yeon Seong of Korea by Angga Pratama/Ryan Agung Saputra (below), 22-20 21-16. The young Indonesians, who are still in the hunt for their first Superseries title, outfoxed the in-form Koreans by executing their tactics to perfection. The victory was set up around the net and, even as Lee and Yoo attempted to switch tactics in the second game, the Indonesians were all over them.

“We tried to be patient,” said Pratama. “The Koreans have a good defence, so the plan was to play near the net. We don’t want to think too far ahead. We didn’t prepare specifically for this tournament. Now we just want to take it one match at a time.” Pratama/Saputra will have to ignore the crowd on semi-finals day, as they are pitted against local pair Goh V Shem/Lim Khim Wah, who outclassed England’s Chris Langridge/Peter Mills 21-16 21-14. The other semi-final features Japan’s Hiroyuki Endo/Kenichi Hayakawa against Chai Biao/Hong Wei. The Chinese were made to work for their victory by Indonesia’s Markis Kido/Gideon Markus Fernaldi (21-14 11-21 21-15).

* Women’s Doubles was expected to be dominated by China but instead it was Japan that came away with the honours. The stars of the day were Ayaka Takahashi/Misaki Matsutomo, who recorded their second win in eight matches over Tian Qing/Zhao Yunlei, 18-21 21-14 21-13. The Chinese, surprisingly, were not as assertive as usual, and Takahashi/Matsutomo had it rather easy in the third game. Japan is assured of one pair in the final, as Reika Kakiiwa/Miyuki Maeda face Takahashi/Matsutomo. * Second seeds Christinna Pedersen/Kamilla Rytter Juhl (Denmark) too got past Chinese opponents, Ma Jin/Tang Yuanting, 17-21 21-19 21-6. “They’re not settled as a pair,” Rytter Juhl said. “I don’t know how long they will play together. It must be difficult for Ma Jin because of all the different partners she’s been playing with. She was playing well with Tang Jinhua, and we could see in her eyes she wasn’t confident today.” The Danes face the formidable Bao Yixin/Tang Jinhua (above) in the penultimate clash.

* Pedersen also made it to the semi-finals of Mixed Doubles with Joachim Fischer Nielsen (below). The Danes cruised past Praveen Jordan/Debby Susanto (Indonesia) 21-12 21-19, and have an opportunity to repeat their last win in Malaysia over Olympic champions Zhang Nan/Zhao Yunlei at the BWF World Superseries Finals. The other semi-final is World champions Tontowi Ahmad/Liliyana Natsir of Indonesia against Xu Chen/Ma Jin (China).