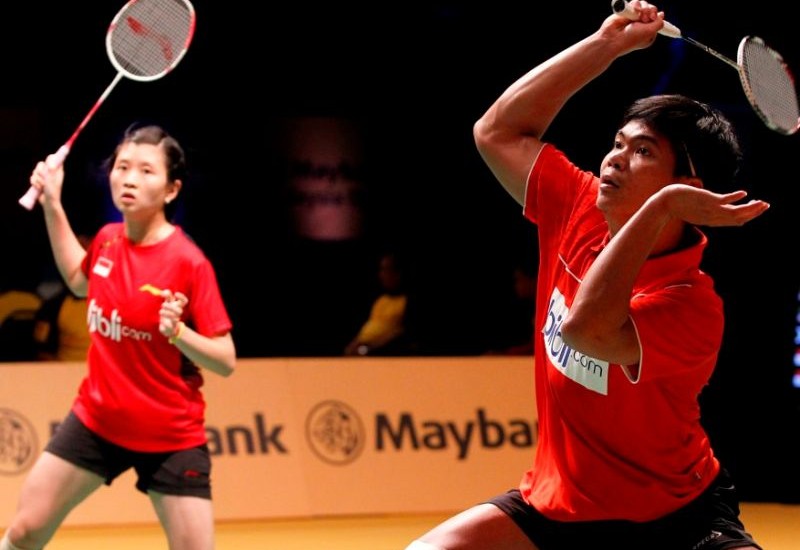 Indonesia’s superstars fell 21-10 19-21 21-13 to the fusillade of inspired Chinese Taipei pair, Lee Sheng Mu/Tsai Chia Hsin, in the second round, sending shockwaves through Putra Stadium; the scene of their first Superseries triumph a year ago which ignited a streak of success.

However, Lee and Tsai’s celebrations would have been tempered by the loss of their popular compatriot, Tai Tzu Ying, who relinquished her Women’s Singles crown by retirement due to illness. Having lost the first game 21-23 and being behind 7-11 in the second, she surrendered. Ironically, it was an Indonesian player – Bellaetrix Manuputty – who benefitted.

Ahsan and Setiawan struggled to find form versus rivals against whom they boasted a 4-0 record. The World champions just could not get going; failing to show their normal creativity and being passive in the first game as Lee/Tsai (right) surprised them with unrelenting fire. The second was close all the way, with Ahsan and Setiawan stealing it in the closing stages. If they hoped to carry the momentum into the third game, they were mistaken, as Lee and Tsai continued piling on the pressure. Even the normally composed Setiawan appeared shaky at net and that was all Lee/Tsai required to close out the match.

“We were relaxed today because they had won all their matches against us and we felt we had nothing to lose,” said Lee.

The Indonesians admitted it wasn’t a good outing. “We didn’t play well,” said Setiawan. “I made a lot of mistakes at the net. We had a bad start and we were frustrated because they defended well.”

Despite this, the day was salvaged for Indonesia by Angga Pratama/Ryan Agung Saputra and Markis Kido/Gideon Markus Fernaldi in Men’s Doubles and Praveen Jordan/Debby Susanto in Mixed Doubles (BWF home page), among others.

Pratama and Saputra shocked All England champions and No. 4 seeds Liu Xiaolong/Qiu Zihan of China in a surprisingly one-sided affair, 21-18 21-19, before Jordan/Susanto broke the hearts of the crowd by scrambling past Malaysia’s Chan Peng Soon/Goh Liu Ying (Malaysia) in an exciting battle, 18-21 21-17 24-22. “We aimed at being consistent, because it’s difficult to catch up once you get behind Liu/Qiu,” said Pratama.

Saputra noted the game was won around the net where the Chinese are “not so good”.

“After Ahsan and Setiawan lost, we wanted to continue the fight for Indonesia,” he added.

The Mixed Doubles contest featuring local hopes Chan Peng Soon/Goh Liu Ying was probably the most riveting of the day as far as the home fans were concerned. The Indonesians levelled a one-game deficit and quickly surged ahead 10-1 in the third game. It looked like a rout at that point.

However, egged on by the crowd, Chan/Goh fought back level; each point won evoking a roar. Fortunes swung back and forth, with both teams saving match point. It was the kind of contest that was finally decided by luck as Susanto’s shot caught the tape to earn a third match point which Jordan converted.

“We lost our focus and panicked once we lost the lead in the third game,” said Susanto. “But in the end, we found our rhythm again.” The much-anticipated final clash between local hero Lee and No. 2 seed Chen Long was almost derailed as Chen battled fever and a fearless attack from Hong Kong’s Wei Nan. The Chinese who survived a match point in his first round, had to dig himself out of a hole again as he trailed Wei in the closing stages. Wei gave as good as he got, attacking from deep in his court and courageously challenging Chen at the net. He saved three match points before succumbing: 19-21 21-18 24-22.