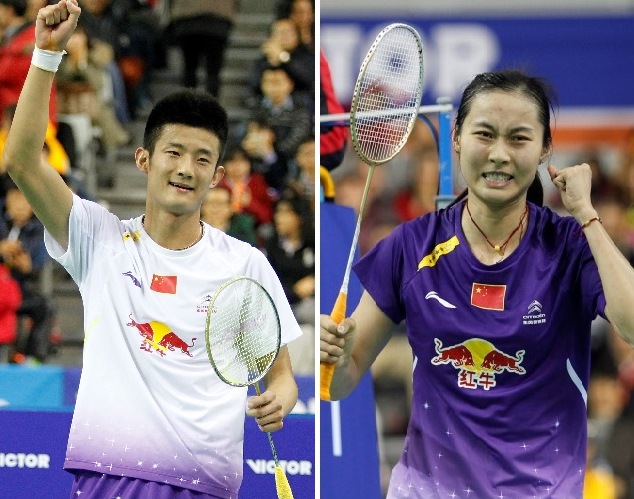 Going into the day assured of two titles with all-China showdowns in Women’s Doubles and Mixed Doubles, the powerhouse clinched also clinched both singles crowns and were only prevented from a clean sweep when Denmark’s Mathias Boe and Carsten Mogensen dismissed the challenge of Fu Haifeng and Hong Wei in Men’s Doubles.

Each final was completed in straight games; the shortest being the Danes’ 36-minute rout – 21-12 21-17 – of veteran Fu and young gun Hong who have been partnered intermittently over recent months. Boe and Mogensen (left) ruthlessly exposed Hong’s shortcomings, drawing error after error from him. By contrast, the top seeds moved smoothly and in synch with each other as they zeroed in on their first win of the new season.

The singles – pitting Lee Chong Wei versus Chen Long (BWF home page; left) and Ratchanok Intanon against Wang Yihan – did not live up to the hype as the Chinese players dominated their respective finals. Chen Long, though still ranked No. 2 in the world behind Lee, showed he will again likely be the one to beat in Men’s Singles throughout the 2014 Superseries campaign.

He controlled most of the match to brush aside his Malaysian opponent 21-14 21-15 in 56 minutes, exhibiting his accustomed quick reaction and all-court skills against Lee who made a number of mistakes and looked uneasy.

Though Intanon would have been happy to start the year on a relative high by reaching the Women’s Singles final in Korea, the Thai star would be disappointed not to have given a better account of herself versus Wang Yihan (BWF home page; right). The 18-year-old was too slow to get into the match and went down 21-13 21-19 in 46 minutes. * Bao Yixin and Tang Jinhua continued where they left off last year, beating compatriots Luo Ying Luo Yu, 21-17 21-15, for top honours in Women’s Doubles (above: presentation ceremony). Both pairs played aggressively and the twins showed great defence but the experience and fluid partnership of Bao and Tang took them to a sixth success in seven tournaments and their fourth Superseries victory. The 58 minutes they needed to oust their rivals was the longest match of the day.

* The all-China Mixed Doubles (below: presentation ceremony) was predictably won by Olympic champions, Zhang Nan and Zhao Yunlei. The polished pair retained their Korea Open title, winning 21-18 21-18 in 52 minutes. It was the 13th triumph in 15 matches for Zhang/Zhao against Xu Chen and Ma Jin.