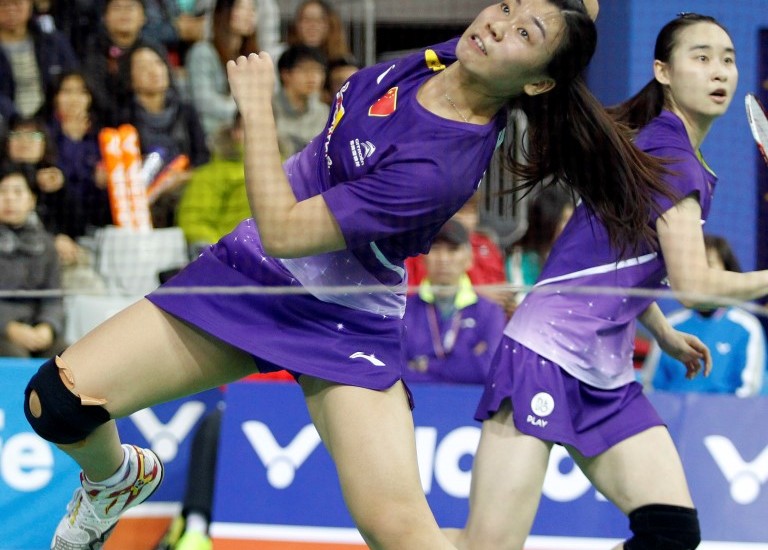 By the end of the penultimate day of the Victor Korea Open 2014, the Chinese were assured of two titles – Women’s Doubles and Mixed Doubles – while securing their presence in the other three finals as well. Among the impressive performers for China was young Women’s Doubles pair Luo Ying/Luo Yu. The twins entered their first Superseries final beating seasoned Japanese campaigners Reika Kakiiwa/Miyuki Maeda 21-16 21-13. They will need to upset their accomplished compatriots Bao Yixin/Tang Jinhua (BWF home page) if they hope to capture their first Superseries title.

The Men’s Singles final will be a clash between the top two seeds: Lee Chong Wei of Malaysia and Chen Long of China. Lee’s semi-final clash against Kenichi Tago was much-anticipated as the Japanese had inflicted one of only five losses which Lee suffered last year; the lone non-Chinese opponent to do so. There were phases in today’s match when Tago appeared to have the measure of Lee, but overall, it was the world No. 1 who came up with the answers at the critical moments. A 21-17 21-17 victory saw the three-time champion enter his sixth-straight final.

The match wasn’t as spectacular as some other contests. It was a more tactical affair, with prolonged periods when Lee and Tago probed each other, playing at a reduced pace. Yet, Lee was able to shift momentum at will and Tago (right) was unable to respond to his explosive bursts. Tago stayed level with Lee in both games, patiently working his points, but Lee had the resources to dictate the tempo towards the home stretch. As always, it was his astounding defence that came to his aid when he was in the firing line of Tago’s thunderbolts, and he was able to turn the pressure back on his opponent.

Lee will again have to be at his best against a rival who has beaten him the last three times: Chen Long. The second seed overwhelmed Thailand’s Boonsak Ponsana 21-15 21-9 in 40 minutes and will seek to post his eighth win in 15 matches over Lee.

The Women’s Singles semi-final between defending champion Sung Ji Hyun (Korea, 4) and World champion Ratchanok Intanon (Thailand, 2) was entertaining. It was a contest of contrasting styles and high intensity, with both playing at great pace and scarcely any unforced errors. Intanon improved her career record to 3-6 with a 24-22 11-21 21-17 victory. The first game reflected the closeness of the match; Intanon (above) had a big lead at 17-11 but Sung fought her way back to game point. The Thai however snatched the game on her third opportunity. Although Sung stormed back in the second game, what eventually tilted the balance towards Intanon was the unpredictability of her shots that periodically deceived Sung. Unafraid to go for the lines at crucial junctures, Intanon’s precision and deception wore down the defending champion. The final however might pose a different challenge for Intanon. Wang Yihan, who conquered Wang Shixian 21-19 21-12 in the other (all-Chinese) semi-final, has a 7-0 record over the Thai.

* Since October 2013, Bao Yixin and Tang Jinhua have won all five events in which they have played, including three Superseries. They reached their sixth straight final, but the path wasn’t easy. The fifth seeds needed 84 minutes to get past Greysia Polii/Nitya Krishinda Maheswari (Indonesia), 21-5 19-21 21-11.

* Defending champions in Mixed Doubles, Zhang Nan/Zhao Yunlei of China (left), were untroubled by Hong Kong’s Chan Yun Lung/Tse Ying Suet, easing to a 21-16 21-12 result. Zhang/Zhao face compatriots Xu Chen/Ma Jin for the title. The latter were similarly at ease in their semi-final against team-mates Liu Cheng/Bao Yixin (21-14 21-10). Xu/Ma will hope to reverse an unenviable record against their compatriots. They have won only two of 14 matches; their last win coming in September 2011.

* Denmark’s Mathias Boe/Carsten Mogensen (below) survived a tricky encounter against Hiroyuki Endo/Kenichi Hayakawa (Japan) 22-20 22-20 to advance to their first Superseries final in exactly a year. Boe/Mogensen will have to contend with China’s Hong Wei/Fu Haifeng, who prevailed 21-11 21-9 versus Chris Adcock/Andrew Ellis of England.