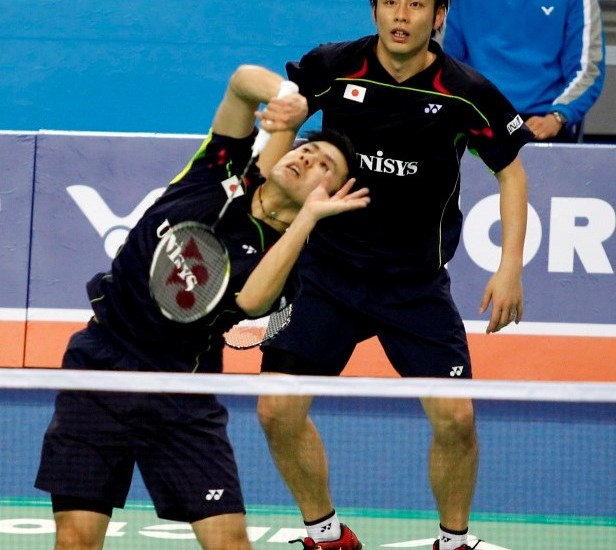 Lee Yong Dae’s ambitions of a fifth Men’s Doubles title at the Victor Korea Open went up in smoke today after an unexpected loss.

The Korean, winner of four Men’s Doubles crowns in previous editions, was a hot favourite – partnered by Yoo Yeon Seong – to claim a fifth championship. The No. 5 seeds have prevailed in three of their last four Superseries tournaments since teaming up in October, and seemed on course for another title in their quarter-final against Hiroyuki Endo/Kenichi Hayakawa. The dream run however was derailed by their fourth-seeded Japanese opponents who won a lengthy duel 16-21 23-21 21-15.

Endo and Hayakawa (BWF home page) showed admirable composure in the second game, fighting off a comeback from Lee/Yoo. The Koreans nearly snatched the match after trailing 16-19 in the second and saving two game points. However, once Endo/Hayakawa took the match into the decider, they led all the way, sealing their win in 87 minutes. They next face top seeds Mathias Boe/Carsten Mogensen of Denmark who eased past Malaysia’s Goh V Shem/Lim Khim Wah, 21-10 21-9. The other standout match was in Women’s Singles, between top seed Wang Shixian of China (above; right) and sixth seed Tai Tzu Ying of Chinese Taipei (above; left). A month ago, at the BWF World Superseries Finals, Tai had pulled off an epic victory over Wang from three match points down; this time it was the turn of the Chinese to hand the same bitter medicine to her opponent. From 12-all in the third game it was a neck-and-neck battle until Wang pulled ahead at 20-18. Tai equalised and held two match points of her own, but Wang did not allow a repeat of her last defeat and willed herself to victory: 12-21 21-12 24-22 in 74 minutes. Wang Yihan (3) too needed three games to quell Bae Yeon Ju (Korea) 21-12 18-21 21-17 and advance to the all-Chinese semi-final.

Defending champion and Korea’s own Sung Ji Hyun also made the last four, holding off a late challenge from Japan’s Minatsu Mitani, 21-15 23-21. Sung was dominant for the most part, forcing Mitani to scamper around and retrieve her steep and well-disguised shots. Mitani turned things around in the second game, but she was guilty of squandering points with wayward shots at crucial moments. Sung faces World champion Ratchanok Intanon in the semi-finals; the Thai emerged a 21-18 21-18 victor over young Chinese Han Li. In Men’s Singles, three-time champion Lee Chong Wei of Malaysia (above) scarcely put a foot wrong in his rout of Du Pengyu, 21-9 21-12. The Chinese is ranked No. 7, but Lee toyed with him, appearing almost casual as he made Du chase the shuttle throughout the match. There was a mix of unusual shots, lightning lunges, full-length dives, and delicate caresses near the net that left the Chinese flummoxed. * Bao Yixin made her second semi-final as she and Liu Cheng (China) grabbed a last-four spot in the Mixed Doubles, 21-13 21-14 victors over Maneepong Jongjit/Sapsiree Taerattanachai (Thailand). Liu/Bao face second seeds Xu Chen/Ma Jin, while in the other semi-final, defending champions Zhang Nan/Zhao Yunlei, also China, will be challenged by Chan Yun Lung/Tse Ying Suet of Hong Kong (right). The latter won 21-16 21-16 versus Chris and Gabrielle Adcock of England.