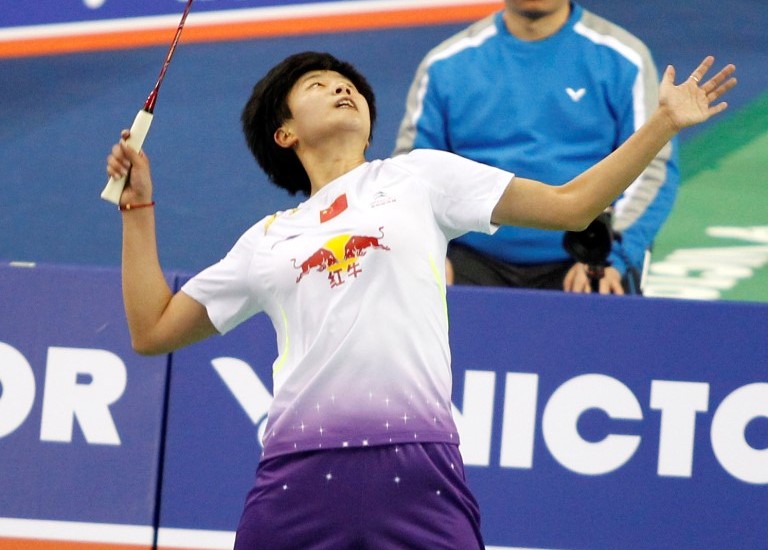 China’s Han Li (BWF home page) emerged victorious after a bruising, 74-minute battle versus Japanese qualifier, Akane Yamaguchi. The match swung like a pendulum, with Han taking the first game, Yamaguchi climbing out of a hole (9-15) in the second, and Han keeping her composure despite a late resurgence from her opponent to finally close it out 21-17 19-21 23-21. The most electric phase of the match was in the final stages, when Yamaguchi closed out deficits of 11-18 and 14-20 to hold match point, but Han scrambled through in the end to earn a quarter-final against BWF World champion Ratchanok Intanon of Thailand. Another past champion, Wang Yihan, strode into the quarter-finals decimating her Korean opponent Ko Eun Byul, 21-4 21-9; fifth seed Bae Yeon Ju of Korea (above) is up next.

In Women’s Doubles, the newly-paired seventh seeds Ma Jin/Tang Yuanting held off a feisty challenge from Indonesia’s Suci Rizky Andini/Tiara Rosalia Nuraidah. The Chinese were outwitted in the second game but had enough in reserve to prevail 21-17 11-21 21-13. Awaiting them in the quarter-finals will be yet another Indonesian pair, Greysia Polii/Nitya Krishinda Maheswari. In the bottom half of the draw, second seeds Misaki Matsutomo/Ayaka Takahashi of Japan (right) overcame initial trouble against Korea’s Jung Kyung Eun/Shin Seung Chan, 24-22 21-14, and face Chinese twins Luo Ying/Luo Yu. The third Chinese pair left in the fray are fifth seeds Bao Yixin/Tang Jinhua; comfortable winners (21-15 21-13) over Savitree Amitrapai/Narissapat Lam (Thailand).

In Men’s Singles, China’s Du Pengyu will have an opportunity to better his 1-9 career record against top-seeded Malaysian Lee Chong Wei as they meet in the quarter-finals. Both cantered to easy wins. Other impressive performances came from French Open champion Jan O Jorgensen (Denmark), 21-19 21-18 over young Japanese Kazumasa Sakai, and fifth seed Kenichi Tago (Japan), 21-19 21-12 over Russia’s Vladimir Ivanov. * England’s Chris Adcock (left) had a satisfying day, posting victories in both his events. Adcock teamed up with his wife Gabrielle in an early match, taking just 33 minutes to breeze past Nipitphon Puangpuapech/Puttita Supajirakul (Thailand) 21-13 21-12 in Mixed Doubles. Adcock returned later in the day with Andrew Ellis; the two were taken the distance by Choi Sol Kyu/Kang Ji Wook (Korea), before they scraped through, 21-16 15-21 21-18. All England champions Liu Xiaolong/Qiu Zihan await them in the quarter-finals.