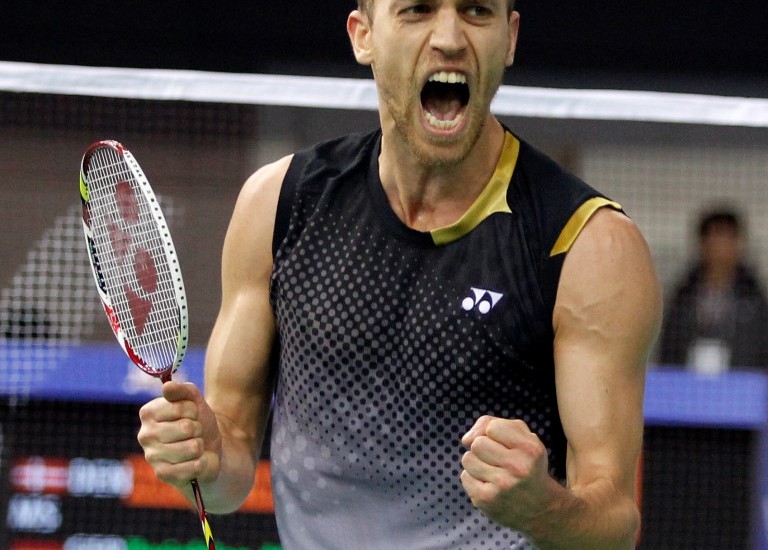 A new year and familiar conditions failed to bring cheer to Kim Ki Jung and Kim Sa Rang today as they were catapulted from their home event – the Victor Korea Open.

The Men’s Doubles second seeds, who had reached successive finals in Hong Kong and Kuala Lumpur late last year, suffered a rude shock in the first round. The two Kims trailed through the first game of their match against Japan’s Takeshi Kamura and Keigo Sonoda and, although they made amends in the second game, they were eventually outclassed 21-17 21-19. Kamura and Sonoda booked a second-round appointment with compatriots, Hiroyuki Saeki/Ryota Taohata.

The match of the day was between the young Men’s Singles prospects of Japan and Korea. Kento Momota, BWF World Junior champion in 2012, fought past determined local qualifier Lee Dong Keun, 21-18 16-21 22-20. Momota was nearly out of the contest, trailing at 16-19 in the third, but he levelled at 19, saved a match point and won the last two points for a memorable victory.

Momota’s triumph was one of several for Japan. Kazumasa Sakai overcame another Korean qualifier, Jeon Hyuk Jin, 21-13 21-10, while senior compatriot Kenichi Tago proved too good for the dangerous Indian K Srikanth, 21-10 21-11. Takuma Ueda also was dominant over Guru Sai Dutt (India), 21-11 21-11. The only Men’s Singles casualty for Japan was Sho Sasaki who could not match up to the power and pace of seventh seed Du Pengyu (China, 7) in a 21-10 21-8 rout. In Women’s Doubles, Korea’s Choi Hye In/Park So Young got an unexpected gift in the form of a walkover from World champions Yu Yang/Wang Xiaoli (China, 1) and a quarter-final berth. Despite the walkover, China has other contenders in Bao Yixin/Tang Jinhua (5), new combination Ma Jin/Tang Yuanting (above) and twins Luo Ying/Luo Yu. * Korean great Lee Yong Dae will be chasing his fifth Men’s Doubles title. Lee has triumphed previously with Jung Jae Sung and Ko Sung Hyun, and will chase his fifth title with Yoo Yeon Seong. He is also in contention in Mixed Doubles as he and Shin Seung Chan (left) outplayed compatriots Kim Dae Sun/Kim Ji Won 21-18 21-13 in the opener. The second round however will be far tougher as they run into second seeds Xu Chen/Ma Jin of China.

* Men’s Singles top seed Lee Chong Wei (Malaysia) would have been wary of his first-round opponent Son Wan Ho but the Korean proved no challenge. Son failed to  replicate his 2012 upset of Lee and, although he pushed the Malaysian close in the second game, the contest was over 21-11 21-18 to the favourite. Meanwhile, Germany’s Marc Zwiebler (BWF home page) won the all-European battle, defeating Viktor Axelsen of Denmark, 21-19 21-16.

* Carolina Marin (below) hasn’t been on the Superseries circuit since June 2012. The young Women’s Singles prospect from Spain made a winning return from her hiatus with a 21-13 21-15 result over Korea’s Kim Hyo Min and was rewarded with a second round versus Ratchanok Intanon of Thailand to whom she lost at the BWF World Championships.