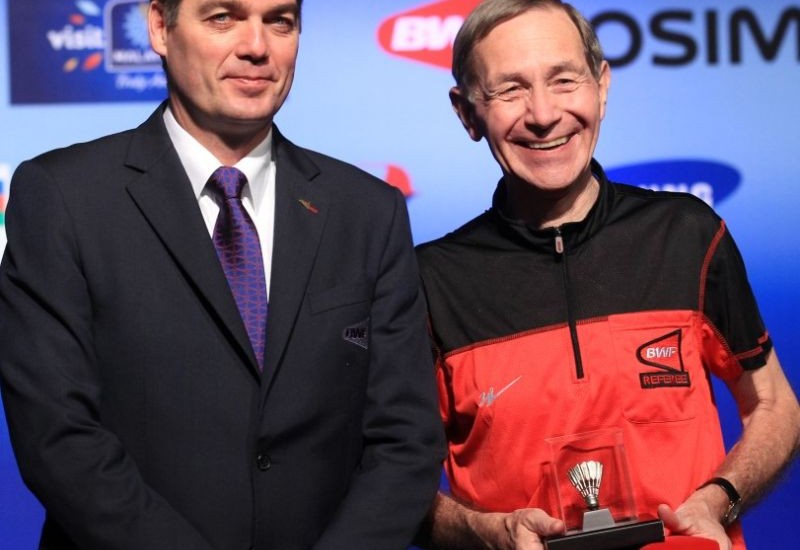 Concluding my tenure as BWF certificated referee by officiating at the BWF World Superseries Finals with my friend Juniarto Suhandinata was most memorable and successfully testing the instant review system added to the experience. More than 27 years ago I began as deputy (referee) and trainee with Arthur Jones – International Badminton Federation president (1989–1993) – shortly after he started modern refereeing. Before that, the referee post was either purely honorary or attached to the duties of tournament director. I learnt a lot from Arthur, and later from Neil Cameron, about meticulous planning and ntegrity. Since then, I have had the pleasure of refereeing more than 20 BWF Major Events, including three Olympic Games (Sydney, Athens and London).

There are various happy and dramatic memories, including, of course, the London Olympics. The action I chose in the heated moments on court in Wembley Arena was a difficult one, but a decision I judged was right at that stage – which has also been acknowledged by many others afterwards, including the International Olympic Committee (IOC). Incidents will happen in any sport. What is important is how they are handled. Another drama was the World Junior Team Final 2006, where I am sure that my decision – to let the Men’s Singles player continue with a blood-flowing injury – resulted in the right winner of this match, which decided the tie and the championship. However, possibly the greatest experience of my badminton life, was as Technical Delegate – together with Sir Craig Reedie – for badminton’s first appearance in the Olympic Games in Barcelona. Many of the decisions Sir Craig and I took 25 years ago still stand and positively impact badminton’s Olympic performance.

One of the things I learnt from working with Sir Craig was that our position in the Olympic Movement is our finest gem. In Council, I sought to ensure we achieved and maintained this. I had the pleasure of chairing the IOC and International Relations Committee for many years as we consolidated badminton and BWF’s place in the Olympic Movement. I have taken initiatives to serve that purpose, which have later developed independently, such as integrating para-badminton in BWF and promoting women in badminton.

It may not be remembered but I was also asked to start a Development Committee for the Federation as I had already successfully done for Badminton Europe. It was great fun and very useful as badminton was among the first sports to organise development programmes. Working with Emile ter Metz, Charoen Wattanasin and Wang Wenjiao, we built a strong worldwide organisation, with just a US$20,000 grant from Olympic Solidarity in the first year. I am happy to note the Development and Sport for All Committee for 2014 has a budget more than a hundred times larger and a top professional staff. It’s been great to see “my baby” grow and mature!

When I left the Development Committee in 1996, I was asked by our President Madame Lu to take over the Court Officials Commission – and I am still there.

Stepping back from refereeing and from Council – I shall still try to contribute to commissions and working groups, and serve as assessor for BWF referees – is an opportunity to remember with gratitude those who contributed most to the many good years I enjoyed with the IBF and now BWF. Among them are Sir Craig Reedie – an inspiration to us all – as well as friends like Poul-Erik Nielsen (the President who initially proposed me), Tom Bacher and superb administrators in Cheltenham, England (Ronnie Rowan, Neil Cameron and Andrew Ryan), and the present-day staff in Kuala Lumpur.