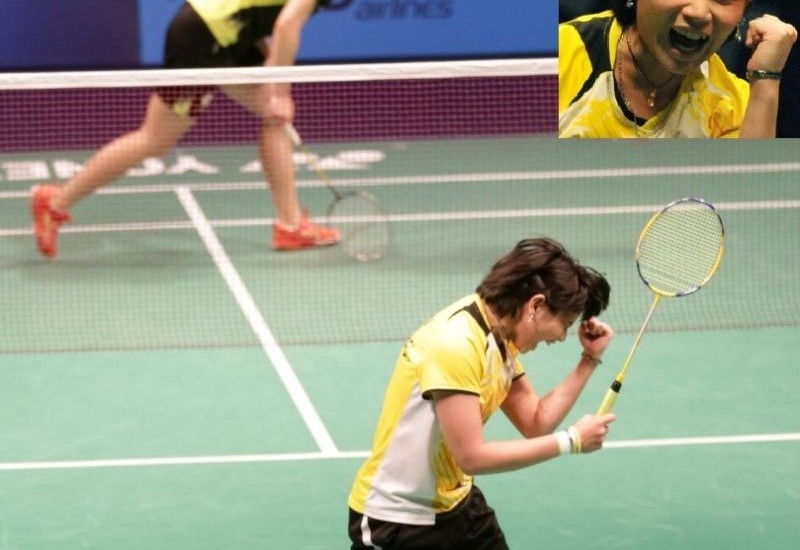 Fast becoming the adopted darling of Malaysian badminton fans, the Chinese Taipei player pulled herself from the abyss of defeat to a stirring and unforgettable victory over the season’s most consistent competitor and a rival whom she had never beaten – Wang Shixian of China.

The faithful crowd which stayed late inside Kuala Lumpur Badminton Stadium was rewarded with the match of the tournament thus far as gutsy Tai (BWF home page) clawed back from three match points down in the third game to triumph 15-21 21-19 22-20. Amid spontaneous outbursts of celebration from spectators, whose encouragement had willed her on in the desperate stages of battle, she was swept up in congratulatory hugs from her parents (below; Hu Jung and Tai Nan Kai) who had nervously kept courtside vigil.

“I never thought I would make it to the final as I qualified in ninth place (for the Superseries Finals),” said 19-year-old Tai, whose berth came at the expense of another Chinese, Wang Yihan, given the Finals’ limit of two players per country in all disciplines.

“I just tried my best today. When I trailed 14-19, I felt Wang was too eager to win, so I just tried to rally. The crowd helped me when I was tired. Badminton here is more popular than in Taipei. I hope fans there will become more like Malaysian fans.” The extraordinary contest, which spanned 77 minutes, saw Tai and Wang stretch each other to the extreme before Wang stormed to a 19-14 lead in the third game and appeared to have sealed the issue at 20-17. However, the drama was about to soar even higher as Tai conjured up an escape of magical proportions, throwing heart and soul into her effort. Having spared her body very little throughout the see-saw tussle, she again dived to the floor at 19-20 to save the last match point, coming up with an unbelievable cross-net shot that Wang failed to reach.

For her troubles, Tai faces world No. 1 and Olympic champion, Li Xuerui of China, for year-end honours, again pledging to leave everything on the court.

Another female player who has clearly expended a lot of energy this week and is unquestionably the iron woman of these championships is Christinna Pedersen of Denmark. She has played unbeaten in both Women’s Doubles and Mixed Doubles, winning eight matches in four days. Tomorrow she has the opportunity, not only to retain the Mixed Doubles title from last year’s Superseries Finals, but also to wrest the Women Doubles crown which she missed out on in 2012, finishing runner-up. Tonight, she and Mixed Doubles partner, Joachim Fischer Nielsen, blasted their way to the title match with Chinese semi-final opponents, Xu Chen and Ma Jin, retiring in the second game. The Danes (above; right) were leading 21-8 11-3 when Xu (above; left) called it quits due to a back injury.

Having denied Ma Jin a shot at two titles, Pedersen faces her Chinese rival again tomorrow as she and Kamilla Rytter Juhl try to oust Ma and Tang Jinhua to capture the Women’s Doubles title.

As for the Mixed Doubles showdown versus Olympic champions, Zhang Nan/Zhao Yunlei of China (below; right), Pedersen noted they have clashed many times and know each other’s games well. Zhang and Zhao eased past local hopefuls Chan Peng Soon/Goh Liu Ying 21-17 21-10 to reach the final.

Modestly heaping praise on her partners, she candidly assessed her chances of having an early Christmas with two major titles.

“I have really good partners. We are playing well and getting better and better this week. It will be very difficult. We have not beaten this Chinese pair yet (Ma/Tang) but we will give our best. “We have the game to compete in both finals and we are hungry to win,” declared Pedersen.

* Indonesia will be hoping to return to Jakarta with some silverware, with Tommy Sugiarto (left) progressing to the Men’s Singles final versus Malaysian hero, Lee Chong Wei. The Indonesian was tested by Kenichi Tago before the Japanese’s challenge wilted in the third game of a long match, with Sugiarto getting through 21-14 19-21 21-5. The match had been an absorbing contest through the first two games. Sugiarto’s intensity did not waver in the third. It was one-way traffic as Tago was unable to keep up.

“I wasn’t happy after my loss in the first match against Sony (Dwi Kuncoro), so I had to wake up against the others,” said Sugiarto. “Tago exhausted himself in the second game and had nothing left. I found my rhythm and could control the match. If I can beat Lee Chong Wei tomorrow, it will be a big achievement.”

* Meanwhile, Mohammad Ahsan and Hendra Setiawan (above; left) are also eyeing success for Indonesia, having broken the hold of Denmark’s Mathias Boe and Carsten Mogensen on the Superseries Finals Men’s Doubles trophy. The three-time defending Finals champions crashed out, 21-18 21-18; their third-straight loss to the Indonesians who meet Kim Ki Jung and Kim Sa Rang (Korea) for the championship.