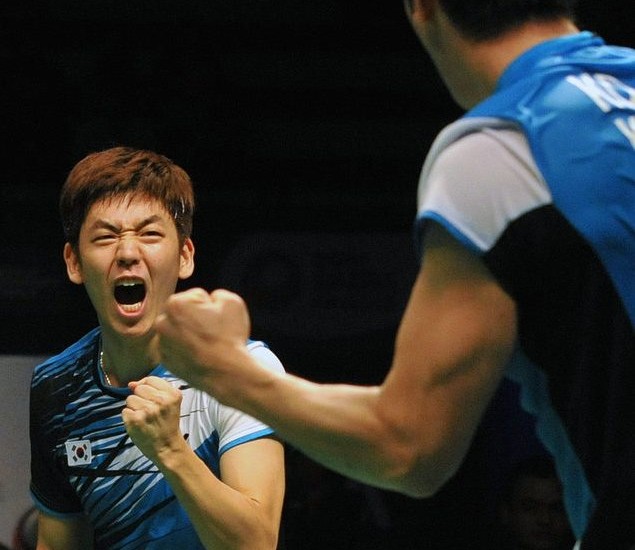 The Men’s Doubles No. 2 seeds, who played well to win two of their three round-robin matches, were doubly unlucky – first to have their victory over fellow Japanese Hirokatsu Hashimoto and Noriyasu Hirata discounted after the latter pair’s withdrawal yesterday and then to be edged out by Denmark’s Mathias Boe and Carsten Mogensen for the runner-up spot in Group B despite thrashing the defending Finals champions.

Endo and Hayakawa surrendered tamely, 21-13 21-17, in their last group match versus Korea’s Ko Sung Hyun/Lee Yong Dae (BWF home page) in which scoring one more point would have squeezed them into the semi-finals. That result left all three pairs – the Danes, Japanese and Koreans – tied on one point with one win and one loss from two matches each. They were also deadlocked two games won and two games lost.

So, to the next tiebreaker – overall points won versus points lost.

This saw Ko/Lee emerge group winners with a +5 count (77-72) while Boe/Mogensen’s was -2 (75-77) and the unfortunate Endo/Hayakawa were -3 (72-75). Had the Japanese scored one more point to also have a -2 differential, they would have advanced by virtue of having beaten the Danes in the group stage. Another player to miss out on countback was India’s Saina Nehwal, who finished third in her group despite beating Bae Yeon Ju (Korea) today, 21-11 17-21 21-13. Nehwal lost more games than Bae who qualified for the semi-finals behind China’s Li Xuerui whose unblemished 3-0 record saw her top Group B.

There were no such issues in Women’s Singles Group A, as Chinese Taipei’s Tai Tzu Ying (right) sealed second place with a strong performance against Korea’s Sung Ji Hyun, 10-21 21-12 21-15.  Tai is a popular personality among Malaysian fans. Apart from winning the Malaysia Open Superseries, she has played in the Axiata Cup and the crowd treated her like one of their own. Tai was at her entertaining best against Sung. After a first-game loss, the Chinese Taipei teen reversed the trend and her deceptive play left Sung stranded on a few occasions to the delight of the crowd. The bubbly player rewarded her supporters with some giveaways as she left the court.

Christinna Pedersen and Kamilla Rytter Juhl (Denmark) had already qualified for the semi-finals before their final Group B Women’s Doubles match, but they made it a memorable outing by beating World champions Yu Yang and Wang Xiaoli for the first time ever. Surprisingly, it was Yu Yang who turned erratic in the late stages to help Pedersen/Rytter Juhl (below) get through comfortably, 21-11 16-21 21-15.

“This was a special win,” said Rytter Juhl. “If we can beat them, we can win the tournament too.” Korea’s Jang Ye Na/Kim So Young continued an impressive run to confirm their place in the semi-finals with a straight-games demolition of Pia Zebadiah Bernadeth/Rizki Amelia Pradipta (Indonesia), 21-16 21-16 in Women’s Doubles Group A.

Mixed Doubles pair, Chan Peng Soon and Goh Liu Ying, sent Malaysians home happy with an exciting win over Indonesian brother and sister, Markis Kido and Pia Zebadiah Bernadeth, in the night’s last match. The 21-18 21-19 victory in Group A ensured their passage into the knockout stage. In the other half of Mixed Doubles, World champions Tontowi Ahmad/Liliyana Natsir exited the tournament with a blank slate, failing to win a single match. Joachim Fischer Nielsen/Christinna Pedersen (Denmark) demolished the Indonesians 21-19 21-12 to top Group B.

* Men’s Singles Group B finished with an exciting encounter between Tommy Sugiarto (Indonesia) and Kenichi Tago (Japan). The match went down the wire, with Sugiarto (left) edging past Tago 21-14 20-22 21-19 to top the group and avoid a semi-final against his opposite number Lee Chong Wei of Malaysia who defeated Danish rival, Jan Jorgensen, 23-21 24-22 in an enthralling Group A fixture.

* Malaysian Men’s Doubles hopefuls Hoon Thien How/Tan Wee Kiong bowed out of the tournament after a close loss against Korea’s Kim Ki Jung/Kim Sa Rang, 21-18 22-20, in Group A. The Malaysians had their opportunities to take the match to a decider but blew their chances. Tan reasoned that he could have been calmer in those tense moments. “I was rushing the points at the end,” he said. “I wanted to kill the shuttle and made mistakes… overall it (season) was good, but we can do better. We were surprised with our performance here.”