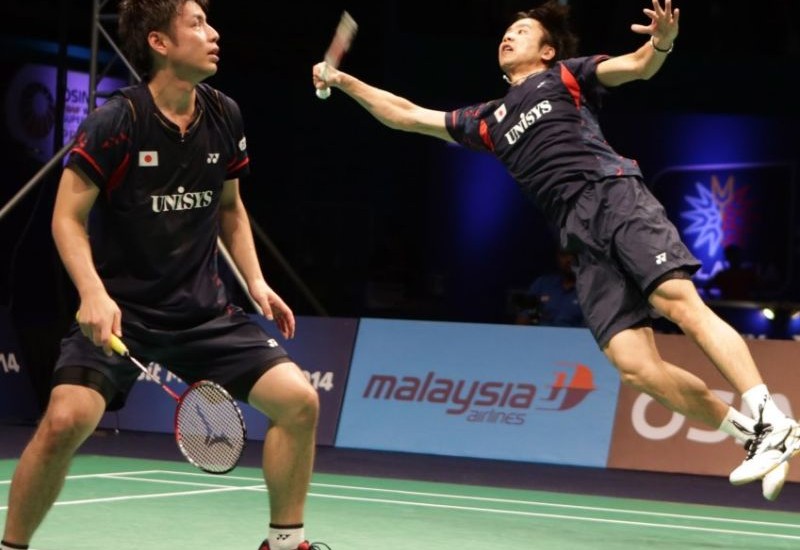 The Danish Men’s Doubles pair, which has won this tournament every year since 2010, was left shocked by the intensity of Japan’s Hiroyuki Endo/Kenichi Hayakawa (BWF home page) – the same pair they beat in last year’s final. It was Endo and Hayakawa’s first victory in four matches against the Europeans, outplaying them 21-18 21-15 in just 38 minutes to lead Group B.

Thrilled with their outstanding performance, the No. 2 seeds highlighted what a difference a year makes as they now see themselves more on par with Boe and Mogensen of whom they were previously in awe. They also noted that having done well again this season and retained their Japan national title last week, they are more confident each time they play. Tomorrow, they face Koreans, Lee Yong Dae and Ko Sung Hyun while the Danes – like the Koreans today – will be the beneficiaries of a walkover from the other Japanese duo, Hirokatsu Hashimoto and Noriyasu Hirata due to the latter’s ankle injury.

While there were not as many surprises this afternoon, there were some personal milestones. In Women’s Singles Group A, Chinese Taipei’s Tai Tzu Ying beat Thailand’s Porntip Buranaprasertsuk for the first time in five matches, 21-19 21-17. The Taipei teen looked sharp and made her deceptive game count against Buranaprasertsuk, sending her opponent the wrong way with her flicks from the net. Tai admitted that she had not enjoyed a great year after winning the Malaysia Open Superseries.

“I’ve been tired at recent tournaments,” she said. “Since I lost yesterday, I thought I just had to give it everything today, otherwise I would be out of the tournament.”

Tai’s last group match will be against Korea’s Sung Ji Hyun who was listless against Wang Shixian (China) losing 21-12 21-15.

Sung has troubled the top Chinese in recent tournaments, and had beaten Wang (right) in their last two encounters. However, she looked leaden-footed today and Wang was in a comfort zone throughout. Sung’s inability to keep her tosses deep hurt her, with Wang getting under the shuttle and sending it wherever she willed. The Korean was often caught at the front court with Wang’s sharp drops and barely offered a contest.

Japan’s Kenichi Tago again escaped from a perilous situation, getting the better of Sony Dwi Kuncoro (Indonesia) for the first time in eight attempts. Tago was off-colour through the first game and much of the second of their Men’s Singles Group B match. He barely scrambled back from the brink, trailing 7-15 in game two. However, the No. 2 seed grabbed 12 of the next 13 points and went on to victory, 12-21 21-19 21-17.

In another Group B match, Kuncoro’s compatriot Tommy Sugiarto inflicted a second straight loss on Hu Yun (Hong Kong) with a 21-9 21-16 verdict.

* Korea’s Jang Ye Na/Kim So Young provided stiff resistance against Ma Jin/Tang Jinhua (China) in the first two games but withered in the closing stages of an entertaining Women’s Doubles Group A match. The Koreans saved six game points in the opener and even had game point of their own, but Ma/Tang held them off to take the lead. The momentum reversed in the second as Jang and Kim stormed back, leading to expectations of a tight decider. Once again the Chinese asserted their superiority, racing home 24-22 12-21 21-13 after the mid-game interval.

* In the other Group A match, Misaki Matsutomo/Ayaka Takahashi struggled to quell the challenge of Indonesia’s Pia Zebadiah Bernadeth/Rizki Amelia Pradipta 21-11 18-21 21-15, while in Group B, Denmark’s Christinna Pedersen/Kamilla Rytter Juhl (above) battled past Japan’s Reika Kakiiwa/Miyuki Maeda 19-21 21-16 21-16.

* Lee Chong Wei scored his most comprehensive victory – 21-6 21-8 – versus Thailand’s Boonsak Ponsana in Men’s Singles Group A action. Regarding his next opponent, Denmark’s Jan O Jorgensen, Lee said: “I have to be careful because Jorgensen has been improving and he is high on confidence. I have to defend well because he is an attacking player.”