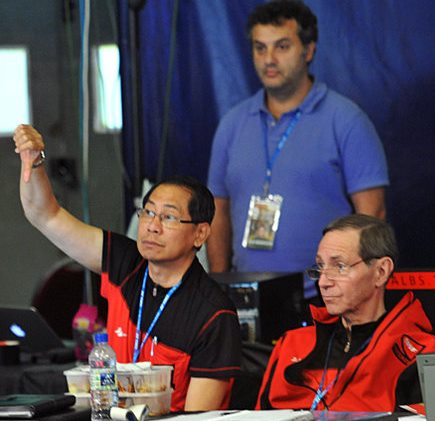 Already a legend in the sport, Lee Chong Wei again etched his name in badminton history tonight, becoming the first player to ever use the instant review system –

and win a point from it!

Headlining the night session on the first day of the BWF World Superseries Finals 2013, the pride of Malaysia (below; left) challenged a line call which was adjudged “out” on the baseline on Wang Zhengming’s side in the second game of their Men’s Singles Group A match. The umpire (below; right) duly referred the matter to the referees at courtside who, after checking a replay of the point, overturned the original decision and awarded Lee Chong Wei the point as deputy referee, Juniarto Suhandinata, gave the vital ‘thumbs down’ signal (BWF home page). At that stage, Lee – who cruised to the first game 21-10 – was behind 2-4 and moved to 3-4 (below). Buoyed by support from vocal home fans at Kuala Lumpur Badminton Stadium, he went on to take the second game 21-18, completing a comfortable outing against the Chinese in 34 minutes.

“It’s good and fair for everybody and all the players are very happy with it. I would like to thank the BWF for introducing it,” said Lee of the dawn of instant reviews in badminton.

“I took a chance – it was 50-50 – and I won the point. I was very lucky. I don’t blame the line judges for making some mistakes. The shuttle is very fast. That’s why having reviews is great for badminton.”

Regarding the match, he admitted expecting a “tougher” battle against the blossoming Wang Zhengming. However, Lee said he has prepared well physically and mentally for the Superseries Finals and hopes to maintain focus throughout.

In Mixed Doubles Group A, Chan Peng Soon and Goh Liu Ying kept Malaysian spirits high with a dogged comeback victory over English couple, Chris and Gabrielle Adcock. The locals began slowly, dropping the first game 16-21 but rebounded to take the next two 21-14 21-19 in a tight contest, featuring some big hitting by both male players.

“We can’t think about the semi-finals yet. It’s still going to be tough playing China and Indonesia. They are always our hardest opponents,” noted Goh. Ahmad and Liliyana Natsir of Indonesia, 9-21 26-24 21-16 to throw Group B wide open. Meanwhile, other contenders to advance from that group, Joachim Fischer Nielsen and Christinna Pedersen of Denmark (above; right), held off China’s Xu Chen and Ma Jin, 21-11 22-20; coming back from 17-20 down in game two.

* If India’s Saina Nehwal is to reach the Women’s Singles semi-finals she will have to do it the hard way, having squandered a winning position against Japan’s Minatsu Mitani in their Group B clash. Perishing 19-21 24-22 21-19 – after being up 12-7 and 16-12 in the third game – she now faces do-or-die encounters versus Li Xuerui (China) and Bae Yeon Ju (Korea).

* Jang Ye Na and Kim So Young (left) only qualified for the Superseries Finals because of injury to their Korean compatriot Kim Ha Na. Despite that, they sensationally knocked off Women’s Doubles top seeds Ayaka Takahashi and Misaki Matsutomo of Japan, 24-22 21-17, in their Group A battle.