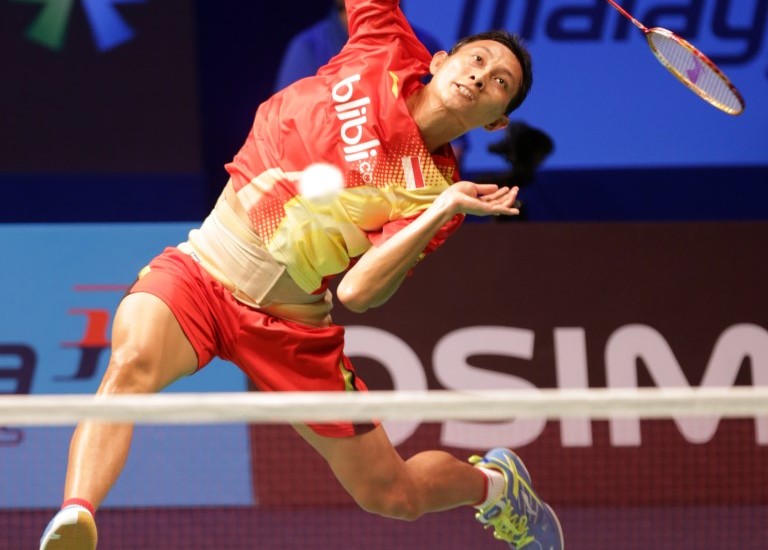 Sony Dwi Kuncoro put his younger compatriot, Tommy Sugiarto, in the shade on the opening afternoon of the BWF World Superseries Finals 2013 at Kuala Lumpur

What some might have anticipated would be a keen tussle between the Indonesians in Group B Men’s Singles, fizzled into a fairly tame 21-19 21-10 victory for 29-year-old Kuncoro (BWF home page) who has shown good form of late.

Though Sugiarto fought back from a 14-18 deficit to challenge for the first game, he could not raise his level at the vital 19-19 stage. Seemingly disappointed that his late effort proved to no avail, he never got into the second game and folded easily. Later he disclosed he is still struggling with the toe injury that saw him retire versus the same rival in the Hong Kong Open semi-finals and that he is not “confident” in his first Superseries Final appearance.

By contrast, a buoyant Kuncoro said he will try to take the same standard of play into tomorrow’s match against Japan’s Kenichi Tago; concentrating though relaxed and enjoying himself.

In the other battle of compatriots across the net from each other, Japanese Men’s Doubles pair, Kenichi Hayakawa and Hiroyuki Endo, rebounded from a game down to beat their team-mates, Hirokatsu Hashimoto (below) and Noriyasu Hirata.

* Reunited for this tournament, Ma Jin and Tang Jinhua played like they never parted, sweeping aside Indonesia’s Pia Zebadiah Bernadeth and Rizki Amelia Pradipta, 21-3 22-20, in the first match on Court 2. The Chinese Women’s Doubles duo looked sharp, racing to a 10-0 lead and wrapping up game one in quick time. The second game was tougher but the seasoned combination pulled through their Group A match.

* Lee Yong Dae’s temporary reunion with Ko Sung Hyun could be very short-lived if they don’t get their act together soon. The Koreans lost their Men’s Doubles to three-time defending Superseries Finals champions, Mathias Boe and Carsten Mogensen. The Danes prevailed 21-16 21-19, stating they have “a lot of respect for the talented Koreans” though they are no longer a pair.

* Li Xuerui began defence of her Women’s Singles Superseries Finals title in emphatic style – a 21-9 21-7 demolition of Korea’s Bae Yeon Ju in Group B. Li’s Chinese team-mate, Wang Shixian, was also in winner’s row in Group A: 21-16 23-21 versus Tai Tzu Ying (above) of Chinese Taipei.