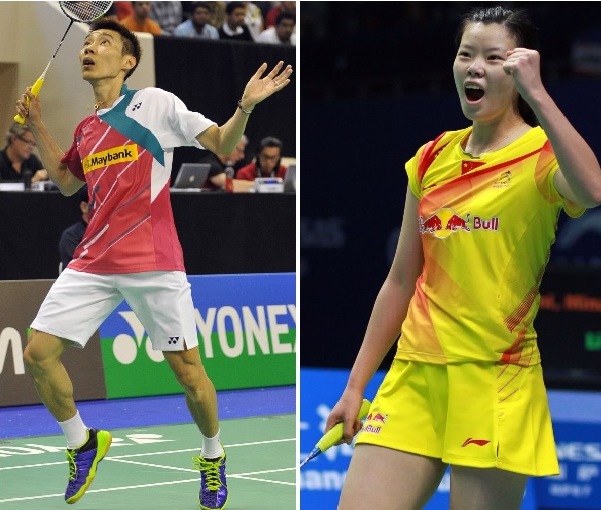 glory in the “Road to Malaysia” year-end showdown.

As reward for 12 months of hard work and consistency in the top tier of badminton’s tournament circuit, they will battle for a share of the US$500,000 prize money which is up for grabs at Kuala Lumpur Badminton Stadium. Starting next Wednesday, the best Men’s Singles, Women’s Singles, Men’s Doubles, Women’s Doubles and Mixed Doubles performers across the 12 Superseries tournaments for 2013 will try to negotiate their way to the final of the Finals on Sunday 15 December and, of course, to claim the crown in their respective categories.

In Men’s Singles, Lee Chong Wei (BWF home page; left) will undoubtedly be the big attraction, especially in front cheering home fans who will only settle for a superlative showing from the man leading both the world and Superseries rankings. At age 31, he has again produced the goods, winning six Superseries titles and will be favoured to regain the World Superseries Finals title which he captured on three successive occasions (2008, 2009 and 2010). Only one of the seven other qualifiers – Kenichi Tago of Japan (left) – has beaten Lee Chong Wei in recent times. After 14 losses on the trot, Tago finally upset his nemesis in the French Open semi-finals in October.  If he can find that form in Kuala Lumpur, the Japanese will be a strong contender for his first major title. Jan O Jorgensen (Denmark, 3) pocketed his career’s second Superseries title at the French Open and will fancy his chances of going all the way. Tommy Sugiarto (Indonesia), Boonsak Ponsana (Thailand), Wang Zhengming (China) and Hu Yun (Hong Kong) complete the line-up. Sugiarto and Wang Zhengming celebrated their first Superseries titles this year; the Singapore Open and China Masters respectively.

Given the difference between the world rankings and Superseries standings, certain stars failed to make the Superseries Finals. The most notable absentee is clearly the 2012 Men’s Singles’ Superseries Finals champion, Chen Long of China. His rivalry with Lee Chong Wei lit up the circuit this year and took the sport to new heights in the absence of China’s icon, Lin Dan, who only briefly ventured from his self-imposed hiatus to capture a record fifth World Championship.

Chen Long beat Lee all three times they played in 2013 but, despite conquering impressively at the All England, Denmark Open and China Open, he ranked No. 11 in the Superseries and therefore did not qualify to defend the title he claimed on home turf in Shenzhen last December. In Women’s Singles, Wang Shixian (China) heads the qualifiers and her top billing is truly a testament to steady results. Though only triumphing at one Superseries (French Open), she was amazingly consistent, reaching three straight finals at the end of the year. Wang is followed by Saina Nehwal (India) who, despite a Superseries drought this year, reached three semi-finals. Defending Superseries Finals champion Li Xuerui (China, 3) had a couple Superseries wins to her credit and is tipped to defend her crown.

The player to watch is Thailand’s Porntip Buranaprasertsuk (4; below) who has qualified ahead of her more illustrious compatriot and World champion Ratchanok Intanon (12). Buranaprasertsuk had some sensational results, upsetting the very best; including Li Xuerui (BWF home page; right), Wang Yihan and Saina Nehwal. Korea’s Bae Yeon Ju (3) and Sung Ji Hyun (7) are both dangerous players and will be out to prove they are not in Kuala Lumpur to make up numbers.

Chinese Taipei’s Tai Tzu Ying (9) won the Malaysia Open but her overall form has been well below her potential. She can count herself the lucky beneficiary of tournament regulations which stipulate a maximum two players per country. This automatically ruled out China’s Wang Yihan who ranked No. 8 in the Superseries (with three titles), with compatriots Wang Shixian (1) and Li Xuerui (5) are ahead of her. Wang Yihan featured in some classic victories this year – such as the Denmark Open and Hong Kong Open – and it is a pity she will miss out.

The most notable absentee in Men’s Doubles will be Yoo Yeon Seong (Korea), whose late-season partnership with the relentless Lee Yong Dae worked like a charm, yielding three Superseries victories in four campaigns. The Koreans have been nearly unbeatable since pairing up at the Denmark Open in October – but they only rank 14th and did not make the Superseries cut. Ironically, however, Lee still ranks No. 4 with former partner Ko Sung Hyun – with whom he clinched the Korea Open and China Masters – and therefore will reunite with Ko, if only temporarily, for a last blast. Perhaps the most relieved at Yoo’s exclusion are World champions Mohammad Ahsan and Hendra Setiawan (Indonesia, 1; right), who were the talk of the Men’s Doubles season until the Lee-Yoo combination came along and outgunned them in all three match-ups so far.

Two Japanese pairs – Hiroyuki Endo/Kenichi Hayakawa and Hirokatsu Hashimoto/Noriyasu Hirata – have qualified after a season of strong performances. They are the only pairs to have played all 12 Superseries. Malaysians Koo Kien Keat/Tan Boon Heong (8) edged out younger compatriots Hoon Thien How/Tan Wee Kiong (9) despite the latter pair’s impressive results late in the campaign. Denmark’s Mathias Boe/Carsten Mogensen, hat-trick winners since 2010, have qualified in seventh place while China’s sole representatives are All England champions, Liu Xiaolong/Qiu Zihan (3). Yu Yang and Wang Xiaoli (China, 2; below) have been the most dominant Women’s Doubles pair this year and are favourites for their fourth-straight title. They suffered only three defeats in 2013 but their victors are outside the top eight. Misaki Matsutomo/Ayaka Takahashi of Japan head the rankings after several impressive results. Their compatriots Miyuki Maeda/Reika Kakiiwa are also in the mix in seventh place. Denmark’s Christinna Pedersen and Kamilla Rytter Juhl – finalists at Superseries events in India, Japan and Denmark – have qualified third.

Having been separated and now put back together for the Superseries Finals, it will be interesting to see how Ma Jin and Tang Jinhua perform. The Chinese duo did not reach the same heights as last year, winning just the Japan Open. By contrast, Tang has flourished with the lanky Bao Yixin, notching four titles, including three at Superseries level. Other qualifiers are Pia Zebadiah Bernadeth/Rizki Amelia Pradipta (Indonesia, 5), Duanganong Aroonkesorn/Kunchala Voravichitchaikul (Thailand, 6) and Korea’s Jang Ye Na/Kim So Young (9). The latter have benefited from the misfortune of compatriot, Kim Ha Na, whose injured wrist has not healed in time to allow her and Jung Kyung Eun to take their place as the No. 8 qualifier. Mixed Doubles is the only category in which the Olympic champions and World champions have qualified in the top eight, with Zhang Nan/Zhao Yunlei (China, 1) and Tontowi Ahmad/Liliyana Natsir (Indonesia, 2) taking the top two slots respectively. Three-time champions Joachim Fischer Nielsen/Christinna Pedersen (Denmark, 4); World Championships runners-up Xu Chen/Ma Jin, and the recently-wed Hong Kong Open winners, Chris Adcock/Gabrielle White (England), are among the elite pairs heading to Kuala Lumpur. The Danes (below) are the title holders but will be hard pressed to hang on to their bragging rights.

Hometown hopefuls, Chan Peng Soon and Goh Liu Ying (6); brother-sister act Markis Kido and Pia Zebadiah Bernadeth (Indonesia, 7) and Thai veterans, Sudket Prapakamol and Saralee Thoungthongkam (9) will also be in action. Spare a thought for another Indonesian duo, Praveen Jordan and Vita Marissa, who lost out though being ranked No. 8 because of the two Indonesian pairs above them in the Mixed Doubles Superseries rankings.