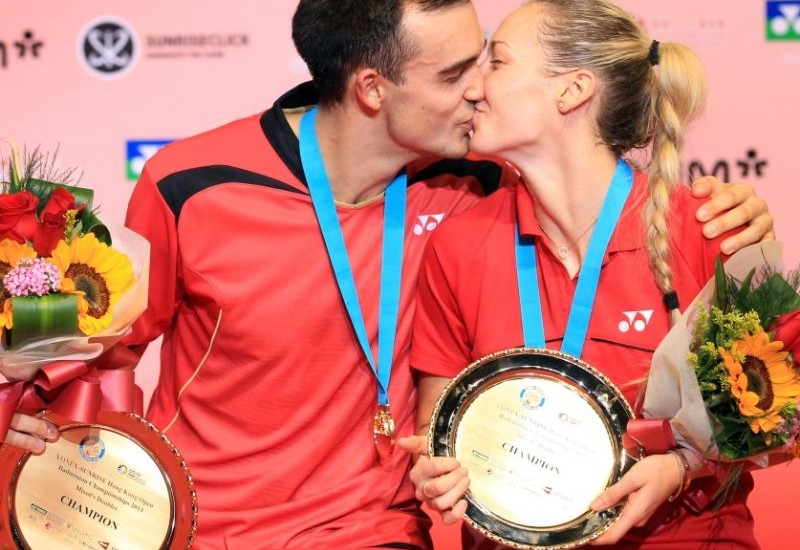 the first English winners at the event in 28 years.

Chris Adcock and Gabrielle White’s 21-14 24-22 victory over China’s Liu Cheng/Bao Yixin was all the more remarkable because it was their first-ever title and the first Superseries success by a married couple. The last English pair to prevail in Hong Kong was Martin Dew/Gillian Gilks in 1985. Adcock and White’s feat was the first of engrossing battles on finals day. Wang Yihan (China, 3) and Lee Chong Wei (Malaysia, 1) took the Women’s Singles and Men’s Singles championships respectively – it marked the 18th Superseries victory for Wang, and 34th for Lee. Incidentally, this was also Lee’s 50th career title. Korea’s Lee Yong Dae/Yoo Yeon Seong (Men’s Doubles) and China’s Bao Yixin/Tang Jinhua (Women’s Doubles; below) were the other winners.

The Mixed Doubles final was unusual as both pairs – Adcock/White (BWF home page) and China’s Liu Cheng/Bao Yixin – were in their first Superseries final (Bao has featured in Superseries finals with other partners). Just as they had prevented defending champions Zhang Nan and Zhao Yunlei from attacking their serves by using the flick serve constantly, Adcock and White successfully executed the same move against Liu and Bao. They also avoided the rapid flat exchanges at which the Chinese are effective. Instead, they opted for soft placements and the tactic worked with an easy first-game win.

Leading 9-5 in the second game, it looked like Adcock and White were cruising, but the game turned at this point. Bao Yixin improved her shots and started to dominate White at the net; the Chinese were able to reel off seven straight points and carried that momentum to a 20-15 lead, with five chances to take the match to a decider.

However, the game swung again. Adcock and White refused to let go; White again attacking at every opportunity at the net. The newlyweds saved the five game points and had a match point at 21-20 but the Chinese won two points to lead 22-21. The game was almost identical to their semi-final against Hong Kong’s Lee Chun Hei/Chau Hoi Wah, which the Chinese won despite their opponents saving four match points and holding a match point. It was not to be a repeat of the semi-finals as Adcock and White served exceptionally under pressure. Adcock was brave enough to serve high twice in the closing stages and the tactic worked perfectly as he and his wife won the last two points.

The Women’s Singles encounter between China’s Wang Yihan and Wang Shixian was one of the year’s best matches. Both Wangs have been in good form lately. Last week, Shixian lost a classic to Li Xuerui in the China Open final. Unfortunately, she was destined to finish runner-up in Hong Kong too despite giving everything she had. The outcome: 21-13 16-21 21-15 to Wang Yihan (above; left).

The match had everything one expected of a Superseries final, with each player dragging the other to all corners of the court, firing winners on the lines and retrieving from improbable situations. Shixian levelled a first-game loss and, with a handy 10-6 lead in the third game, looked like she had the momentum to surge to the title. Both appeared exhausted, but Yihan found energy for a final assault and the force of her attacking play caused Shixian to wither. Lee Yong Dae and Yoo Yeon Seong have been the best Men’s Doubles pair since they started in October. They duly won their third Superseries title in four campaigns with a 12-21 21-15 21-18 victory against fourth-seeded compatriots Kim Ki Jung/Kim Sa Rang (above: presentation ceremony). However, they were pushed to the limit as the Kims began with such a ferocious attack that Lee and Yoo were blown away in quick time. The favourites worked their way into contention although there were times in the third game when it appeared they were succumbing to pressure. The match decisively swung their way when Kim Ki Jung served into the net at 14-16 and Lee, who was not his usual sharp self, picked up his game to ensure his 30th Superseries title. * Malaysia’s Lee Chong Wei (above) enjoyed one of his easiest Men’s Singles finals, outclassing Sony Dwi Kuncoro from the start. Lee’s speed and explosiveness were too much for the Indonesian, who turned erratic and appeared to have lost heart by the end of the first game. Lee scored winners at will as he wrapped up the contest 21-13 21-9 in 34 minutes.

*Bao Yixin and Tang Jinhua were in trouble against their hard-hitting compatriots Ou Dongni/Tang Yuanting in the all-Chinese Women’s Doubles final. Bao and Tang however called upon their greater experience to outplay the younger pair 18-21 21-16 21-15 and maintain their perfect record – four titles in four finals!