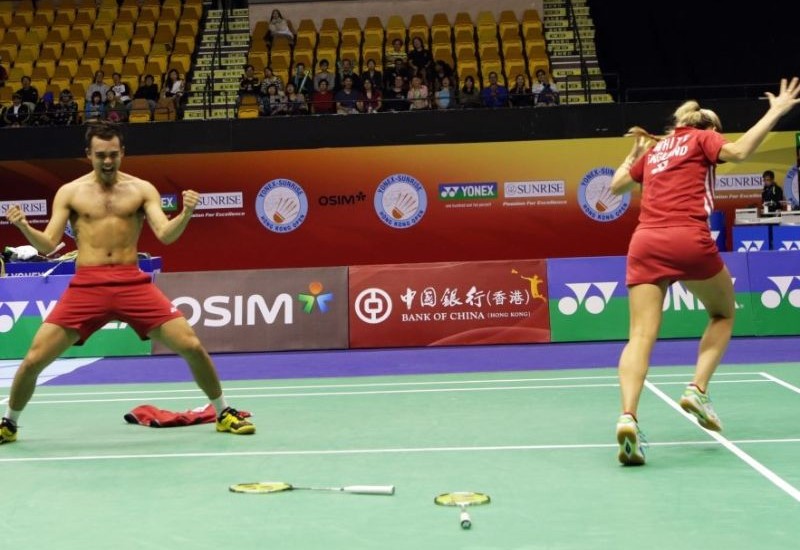 Chris Adcock and Gabrielle White enjoyed one of their career’s finest moments as they made the final of the Yonex Sunrise Hong Kong Open 2013 today. The England husband-wife pair scored a memorable 21-12 21-16 upset of Olympic and defending champions Zhang Nan/Zhao Yunlei in the Mixed Doubles semi-finals and in the process reached their first Superseries final.

Before today’s quarter-final, Mr and Mrs Adcock (BWF home page) had run into Zhang Nan/Zhao Yunlei three times in the last month. At the Victor China Open last week, the Chinese demolished the English pair in just 35 minutes. It was thus a remarkable turnaround for Adcock and White to give their opponents a taste of their own medicine – their victory taking just 38 minutes! It was the worst defeat the Chinese pair had suffered all year. The English did well to withstand the pressure in the second game as the Chinese frequently threatened to overtake them. Adcock had a standout game as he smashed powerfully and threw himself around the court. The English also resorted frequently to the flick serve, catching both Zhang and Zhao by surprise and disrupting their momentum.

China’s Bao Yixin has a chance at two titles. After partnering Tang Jinhua during a quick demolition job of Misaki Matsutomo/Ayaka Takahashi (Japan) in Women’s Doubles, Bao paired up with Liu Cheng for the Mixed Doubles semi-final against Lee Chun Hei/Chau Hoi Wah (Hong Kong). Lee and Chau (above) forced the match to a decider, and the match swung from one team to another. Liu/Bao had leads of 18-12 and 20-16, but Lee/Chau saved four match points and even had a match point of their own at 21-20. The Chinese gathered their wits in time to take the next three points and book their place in the final.

After her upset of Women’s Singles defending champion Li Xuerui in the quarter-finals, all eyes were on Porntip Buranaprasertsuk as she took on third seed Wang Yihan (China). On two recent occasions, the Thai has been unable to beat two top Chinese players in succession, and the pattern repeated today. Buranaprasertsuk was near-perfect in the opening game, dominating Wang with her attacking game. The Chinese was unable to counter her jump smashes, her accuracy in finding the lines, or her defence. However, as the match wore on, Wang turned the momentum and eventually Buranaprasertsuk started flagging under the relentless pace. The 17-21 21-15 21-13 victory gives Wang a shot at a record 18th Superseries title. Standing in her way will be compatriot Wang Shixian, who was mostly untroubled during a 21-13 21-17 rout of Japan’s Minatsu Mitani (above).

* Men’s Singles top seed Lee Chong Wei powered his way to yet another Superseries final, making light of Boonsak Ponsana’s (Thailand, 8) semi-final challenge. Ponsana has beaten Lee only twice in 21 meetings; both victories coming in 2008. The script did not change and Lee decimated Ponsana 21-12 21-7 in 33 minutes. In the other semi-final, fifth seed Tommy Sugiarto suffered an injury at 21-14 8-3 down, thereby conceding the match to fellow Indonesian, Sony Dwi Kuncoro (both; right). The final favours Lee who has an 8-5 career edge over Kuncoro.

* Bao Yixin has had a sensational 2013 season despite pairing with several partners. Bao made her fifth straight final as she and Tang Jinhua shrugged off third seeds Misaki Matsutomo/Ayaka Takahashi (Japan) 21-18 21-10. Compatriots Ou Dongni/Tang Yuanting (below) were just as dominant over second seeds Christinna Pedersen/Kamilla Rytter Juhl (Denmark), 21-13 21-15. *Chris Adcock’s hopes of playing two finals were dashed when he and Andrew Ellis were outgunned 21-13 21-14 by Korea’s Kim Ki Jung/Kim Sa Rang. Men’s Doubles will be an all-Korean affair, as the two Kims will face Lee Yong Dae/Yoo Yeon Seong, who narrowly got past world champions Mohammad Ahsan/Hendra Setiawan (below). Lee and Yoo have spun a web around Ahsan/Hendra twice in the last month, but today the Indonesians were better prepared and the two teams were within a point of each other throughout the contest. Lee and Yoo saved a game point in the second game before converting their first match point for a 22-20 22-20 win.