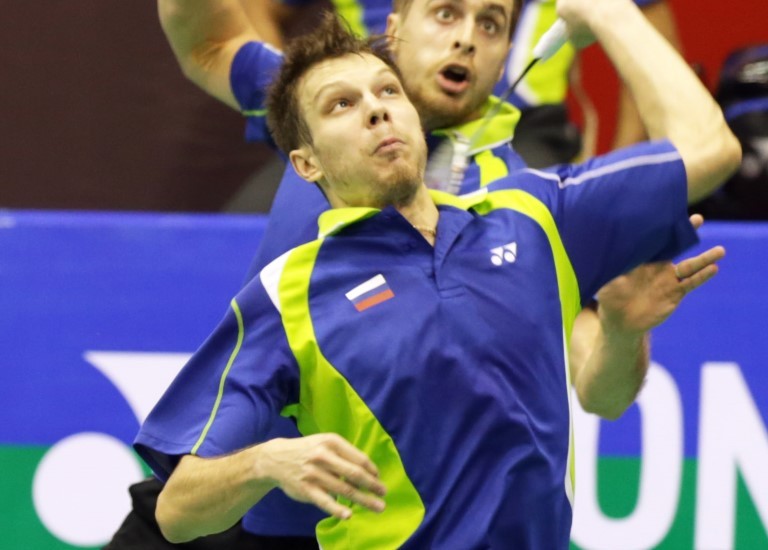 World champion Ratchanok Intanon was not so fortunate. The Thai has been off-colour since returning from injury following her BWF World Championships victory and the trend continued as she was shot out in straight games, 21-14 21-13, by Korea’s increasingly impressive Bae Yeon Ju.

A disappointed Intanon noted the wind was “very strong” and affected her shot-making. Additionally, the teenager admitted feeling the pressure of expectation now she bears the tag of World champion. Looking ahead, she said she hopes to compete in the Superseries Finals, despite not doing well since her return to competition.

There were two other seeded casualties: India’s Saina Nehwal (7) and Chinese Taipei’s Tai Tzu Ying (8). Nehwal lost her first match in seven encounters to the in-form Porntip Buranaprasertsuk (Thailand), 21-17 9-21 21-15, while Tai could not capitalise on her first game lead of 19-12 against Minatsu Mitani of Japan and slipped to a 25-23 21-16 defeat.

The reunion of Men’s Doubles defending champions and Olympic gold medallists, Cai Yun and Fu Haifeng (6), was short lived as the Chinese were shown the door by Russians Vladimir Ivanov/Ivan Sozonov (BWF home page). Cai and Fu fought to level a deficit of 11-16 in the deciding game, and even saved two match points, but the Russians refused to get frustrated and sealed their upset with a 21-16 18-21 22-20 scoreline.

Another second-round clash, between Denmark Open champions Lee Yong Dae/Yoo Yeon Seong and All England champions Liu Xiaolong/Qiu Zihan (China, 3), was expected to go down the wire but, rather surprisingly, the Koreans routed their opponents. Although Liu/Qiu took the first game, Lee/Yoo (below) stormed back and did not allow their rivals to reach double figures in either of the next two: 17-21 21-9 21-6. England’s Chris Adcock enjoyed a successful day, winning both his doubles matches. Adcock and Gabrielle White eased past compatriots Andrew Ellis/Lauren Smith 21-16 21-18 in Mixed Doubles. He then teamed up with Ellis for Men’s Doubles and survived some anxious moments against Berry Angriawan/Ricky Karanda Suwardi (Indonesia), 21-16 24-22.

There were no surprises in Mixed Doubles. The only seeds to be tested were Chan Peng Soon/Goh Liu Ying (5), who were given a feisty battle by Germans Michael Fuchs/Birgit Michels; the Malaysians prevailed 22-20 22-20 in 45 minutes. * The match of the day was undoubtedly third seed Kenichi Tago’s sensational 18-21 21-19 25-23 triumph over Hong Kong’s Hu Yun. The match overshadowed the other fine tussles, extending to a nerve-racking 90 minutes. Having lost the first game, Tago fought back from the brink – in the second from 14-18 down, and in the third from 12-18 down. Both players saved two match points each before Tago found the energy for one last point.

* The battle of the ‘Chong Weis’ – Lee and Feng – in Men’s Singles went the way of the favourite. World No. 1 Lee Chong Wei took less than half hour to overpower his younger compatriot (Chong Wei Feng) 21-12 21-18 and was rewarded with a quarter-final against French Open champion Jan O Jorgensen (Denmark). Jorgensen’s team-mate Hans Kristian Vittinghus (above; right), who triumphed over England’s Rajiv Ouseph 12-21 21-19 21-14, will take on Boonsak Ponsana (Thailand) in another quarter-final.

* Macau’s Wang Rong/Zhang Zhibo (above), who upset Jang Ye Na/Kim So Young (Korea) in the first round, could count themselves unlucky in the second. They had their chances in both games against third seeds Misaki Matsutomo/Ayaka Takahashi (Japan) but failed to capitalise as they went down 22-20 25-23. Three Chinese pairs – Yu Yang/Wang Xiaoli (1), Bao Yixin/Tang Jinhua (5) and Ou Dongni/Tan Yuanting – advanced to the quarter-finals. Hirokatsu Hashimoto and Miyuki Maeda of Japan take a breather during their Mixed Doubles win (21-17 16-21 21-16) versus Denmark’s Anders Kristiansen and Julie Houmann.