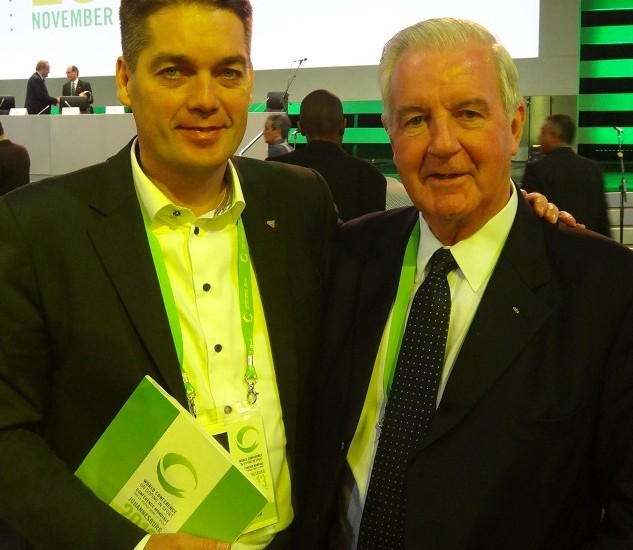 World Conference on Doping in Sport in Johannesburg, South Africa.

Sir Craig Reedie (right) will become the organisation’s third president since the founding of WADA in 1999 when he takes up the post on 1 January 2014. Sir Craig will take over from outgoing WADA President, John Fahey from Australia.

Currently a member of WADA’s Executive Committee and Foundation Board, Sir Craig has served as Chair of WADA’s Finance and Administration Committee since 1999.

“We are delighted that a member of our badminton family has been elected WADA President. Sir Craig brings to the role, significant experience from an extensive career in international sport at the highest levels,” said BWF President Poul-Erik Høyer (BWF home page; left), who attended the Johannesburg meeting.

A former IBF/BWF President, Sir Craig Reedie became an Honorary Life Vice President of the IBF/BWF in 1984. He is widely credited for spearheading the campaign to get badminton on the Olympic Games programme in Barcelona in 1992.

He has been a member of the International Olympic Committee since 1994 and sits on its Executive Board. A long-standing British sport administrator who became IOC Vice President last year, he has served the IOC in numerous capacities, including chairing the Commission which evaluated the candidatures for the 2020 Olympic Games (Istanbul, Madrid and Tokyo). Sir Craig was elected by the IOC in September as the sporting movement’s preferred candidate for WADA President. WADA (above: conference in session) also announced Friday that South African, H.E. Mr. M.A. Stofile will become the next WADA Vice President, also starting his term in office in January.

Sir Craig Reedie assumes the presidency at a pivotal time in the fight against doping in sport. The Foundation Board approved on Friday a new WADA Code and International Standards following two years of consultation with all key stakeholders in international sport, government and National Anti-doping Organisations.