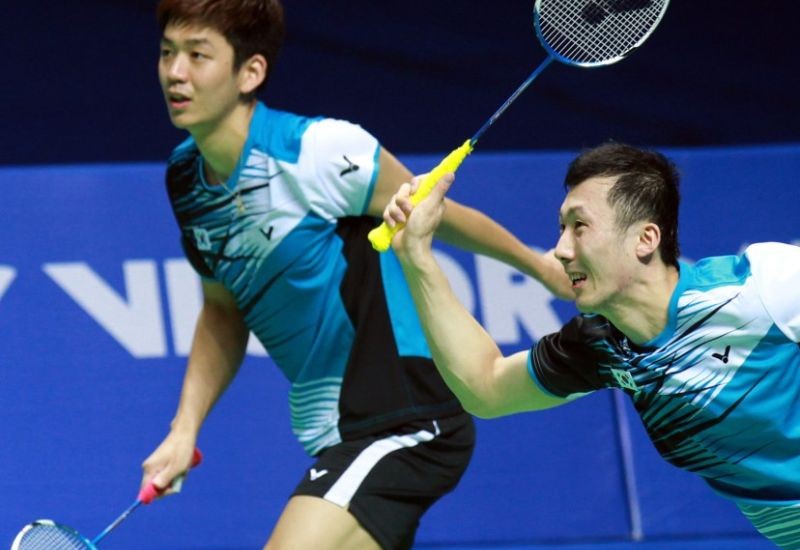 Hoon Thien How and Tan Wee Kiong – the unheralded act of the Victor China Open 2013 – continued their sensational run today, romping into the Men’s Doubles finale.

The Malaysian pair advanced to their first-ever Superseries Sunday where they face Korea’s Lee Yong Dae/Yoo Yeon Seong. Hoon and Tan (below) held their nerve in a tight first game and maintained the pressure in the second to prevail over China’s Cai Yun/Chai Biao, 23-21 21-17. Despite that loss, the hosts assured themselves three titles as the Men’s Singles, Women’s Singles and Women’s Doubles finals will be all-China affairs. The Mixed Doubles championship also eluded China’s grasp – possibly only due to the injury that forced Zhao Yunlei’s withdrawal from competition.

Chen reached his fourth-straight China Open title decider with a comfortable 21-18 21-7 victory over Malaysia’s Chong Wei Feng. Chong was impressive in the first half, playing patiently and his control and precision prevented Chen from unleashing his destructive game. The Malaysian kept the shuttle on a good length and matched Chen on most counts. His defensive game was good enough to prolong the rallies and he breached Chen’s defence with some well-directed smashes.

However, once the defending champion wrapped up the first game thanks to a misjudgement by his challenger on the back boundary line, the Malaysian’s game quickly fell apart as did his intensity. Chen, firing winners at will in his crushing result, now opposes compatriot Wang Zhengming. The latter triumphed 22-20 9-21 21-6 in a match of fluctuating fortunes over Japan’s Kento Momota.

In her last two Superseries events in China, Thailand’s Porntip Buranaprasertsuk has pulled off the biggest upsets in Women’s Singles: at the China Masters in September, she beat Olympic champion Li Xuerui in the semi-finals. At the ongoing China Open, it was the in-form Chinese third seed Wang Yihan who succumbed to Buranaprasertsuk in the quarter-finals. However, the Thai has been unable to follow up one upset with another and that trend continued today.

Despite her stunning upset of Wang yesterday, she could not repeat the success against Wang Shixian (above right). The Chinese seventh seed shot to a 6-0 lead and was never threatened as she appeared too fast and too powerful for her rival. The second game was a washout as Wang took just 31 minutes to win, 21-13 21-5.

Wang’s opponent tomorrow will be Li Xuerui; the Olympic champion was too good for her young compatriot Han Li, 21-12 21-19. Given a 2-2 head-to-head record between Wang and Li, the Women’s Singles showdown looks an intriguing prospect. * In Mixed Doubles, World champions Tontowi Ahmad and Liliyana Natsir (Indonesia, 2) had a surprisingly easy victory over Kim Ki Jung/Kim So Young, 21-9 21-11. The Koreans were unable to get anything right during their short stay on court. The Indonesians take on Denmark’s Joachim Fischer Nielsen/Christinna Pedersen, who clinched their semi-final without hitting a shuttle as their opponents, Zhang Nan/Zhao Yunlei, conceded a walkover due to Zhao’s foot injury.

They must now conquer World champions Yu Yang/Wang Xiaoli – who also received a walkover from Zhao Yunlei (and Tian Qing) – for the Superseries Premier championship.

* The most entertaining encounter of the first session was the Men’s Doubles clash between recently-paired Lee Yong Dae/Yoo Yeon Seong (BWF home page) and Japan’s Hiroyuki Endo/Kenichi Hayakawa (below), which the Koreans won after a tough battle, 19-21 21-19 21-11. The Japanese played intensely through the first two games, with the rallies bringing out the best in Men’s Doubles – rapid-fire attack met with high-quality defence. Endo and Hayakawa won a close first game and were even at 15-all in the second, but an error at that point saw their level dip slightly. They could not find the reserves required to hold off the rampaging Koreans in the deciding game.