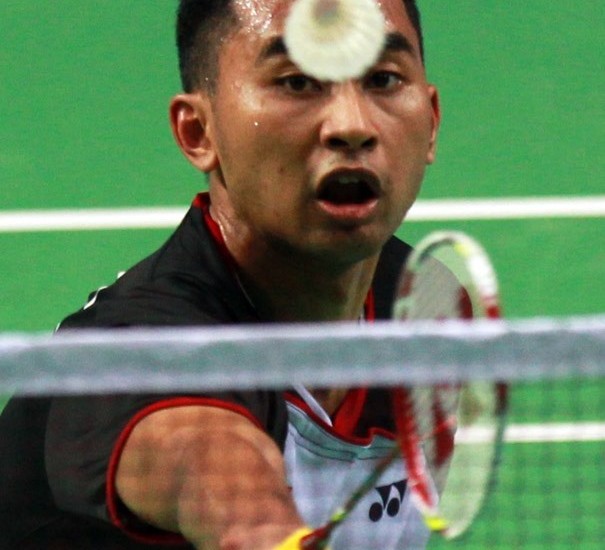 The topsy-turvy nature of form was painfully evident today as some high-profile players crashed out of the Victor China Open 2013. Until a few weeks ago, Men’s Doubles World champions Mohammad Ahsan and Hendra Setiawan could do no wrong. Counting four straight titles and a runner-up place at the Denmark Open, the Indonesian pair was unbeatable but their fairytale run came to a rude halt with a first-round loss at Yuan Shen Gymnasium in Shanghai today. The pair they beat for the world title, Mathias Boe and Carsten Mogensen (Denmark, 2), also exited on a day of upsets in the men’s divisions.

Ahsan/Setiawan capitulated 21-18 21-11 to Korea’s Lee Yong Dae/Yoo Yeon Seong (below; right), the pair that defeated them for the Denmark Open title. Boe and Mogensen offered greater resistance, but they too were outplayed in straight games, 25-23 21-15, by Hoon Thien How/Tan Wee Kiong of Malaysia.

Equally abrupt was the fall of Men’s Singles seventh seed Jan O Jorgensen. The Dane won the French Open Superseries a fortnight ago and appeared in the form of his life. However, he was sent packing by Malaysia’s Liew Daren, who was a first-round loser in Paris as the defending champion. Liew’s 21-17 21-12 victory over Jorgensen was the Malaysian’s first opening-round victory at a Superseries since January.

* In Men’s Doubles, England’s Chris Adcock and Andrew Ellis (above; left) surprised eighth seeds Angga Pratama/Ryan Agung Saputra (Indonesia) 21-11 21-19. Earlier, Ellis had teamed up with Lauren Smith in Mixed Doubles and eased through to the second round after opponents Ko Sung Hyun/Kim Ha Na retired at 11-7.

* Veteran Thai Mixed Doubles pair Sudket Prapakamol and Saralee Thoungthongkam (above) held off a resolute challenge from Japan’s Kenichi Hayakawa/Misaki Matsutomo to advance to the second round. Hayakawa and Matsutomo saved four match points in the second game but the Thais shut them out early in the third to prevail, 21-17 21-23 21-14. Lu Kai and Tang Jinhua of China battled hard in a losing Mixed Doubles effort that lasted an hour and 9 minutes versus Malaysia’s Chan Peng Soon and Goh Liu Ying (16-21 21-18 21-19).