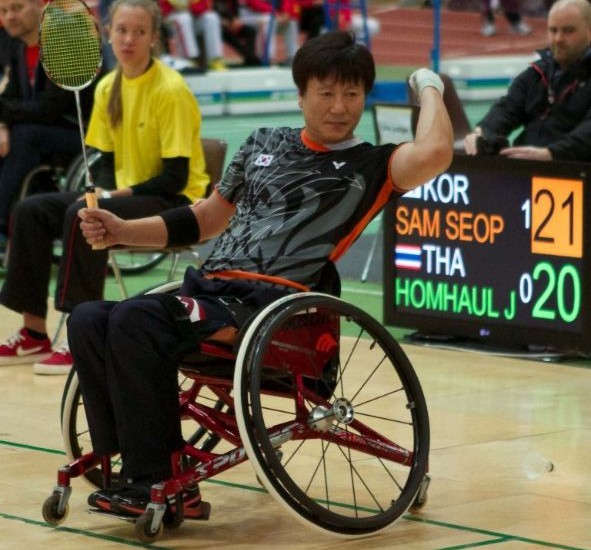 Korea rolled away with more on-court glory yesterday, winning gold in six of 23 finals – all in wheelchair categories – as the BWF Para-Badminton World For the past two weekends, the country’s young players have stolen the badminton headlines with stunning results in the team and individual segments of the BWF World Junior Championships. This weekend, their physically-challenged compatriots took over the global limelight, demonstrating that disability is no deterrent once they get rackets and shuttles in their hands.

On the men’s side, Kim Kyunghoon’s success with Lee was just one of his three medals as he collected another gold and a silver in the Wheelchair 2 Men’s Doubles and Men’s Singles respectively. He lost the top spot in singles to compatriot Kim Jungjun 15-21 17-21 but then partnered his team-mate to doubles glory over England’s Gobi Ranganathan and Martin Rooke, 21-14 21-19.

England and India left the Helmut-Koernig Hall with fond memories too, each snagging three golds. Host nation, Germany, had the distinction of sharing in two gold medals as Thomas Wandschneider – partnered by David Toupé of France – won the Wheelchair 1 Men’s Doubles while another German – Katrin Seibert – and Norway’s Sagoy prevailed in the Standing class Women’s Doubles.

For all the scores from the BWF Para-Badminton World Championships 2013, click here.