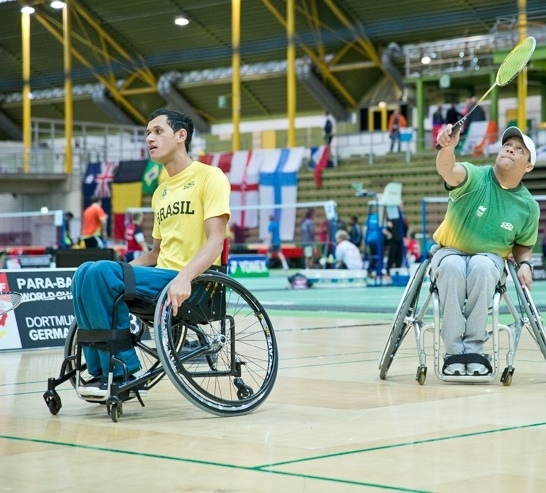 The scene is set for the first day of action in the BWF Para-Badminton World Championships 2013 in Dortmund, Germany.

Starting at 9 a.m. local time, more than 200 matches will be played today as some of the world’s best para-badminton exponents begin their hunt for titles across the six sport classes into which they have been placed for this tournament.

Keen to get on court, athletes enjoyed an extremely busy day yesterday as all 38 participating countries had lengthy practice sessions. It was a veritable United Nations inside Helmut-Koernig Hall (centre above), with Malaysia training alongside Columbia; Scotland next to Australia; England hitting opposite Brazil (BWF home page); and Uganda and Boznia Herzegovina sharing a court.

Competitors in Short Stature mixed with their peers in the Wheelchair and Standing categories (centre below: players practising). Players displayed fantastic ability and shot-making despite various disabilities. Once again, the atmosphere and anticipation strongly hinted this event will be the highest quality para-badminton tournament yet staged. Eleven courts – one more than originally planned – have been set up; a portable wooden floor providing a perfect surface for five wheelchair courts. Six traditional Hova courts are available for matches in the other four sport classes.

Meanwhile, the marathon classification procedure – which commenced on Tuesday – was completed just before lunch after which team managers and technical staff confirmed the entries and classes and the main draw was done (centre below).

At the opening ceremony later, Mayor of Dortmund Ullrich Sierau joined BWF Vice President Para-Badminton Paul Kurzo in welcoming the teams and wishing players a successful event. The festivities concluded with dinner in the sports hall.