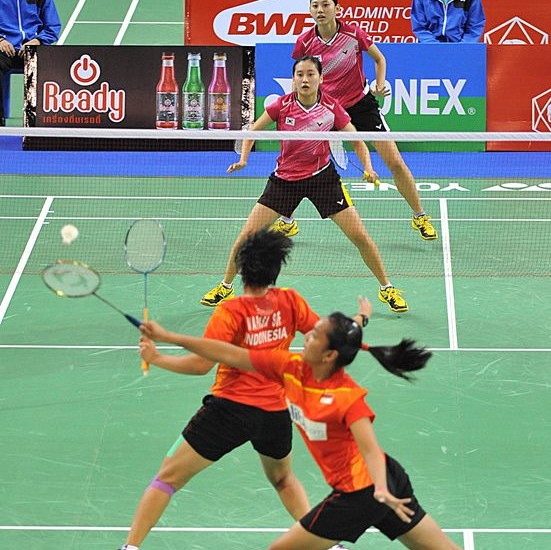 The Suhandinata Cup is heading to Seoul! Despite finding themselves 1-2 down to their rivals, Korea held their composure to take the last two matches – Women’s Singles and Women’s Doubles – thereby wresting the title as the curtains fell on the first phase of the SCG BWF World Junior Championships 2013 in Bangkok, Thailand.

Indonesia’s semi-final heroes – Kevin Sanjaya Sukamuljo and Masita Mahmudin – got their country off to a fine start, beating Choi Sol Kyu and Chae Yoo Jung in Mixed Doubles (21-19 21-16). Jeon Hyuk Jin (centre below; right) put Korea on the board, claiming Men’ Singles 21-16 21-19 from Indonesia’s Jonatan Christie to level the tie 1-1. Sukamuljo then returned to the court with Arya Maulana Aldiartama to put Indonesia in the ascendancy again with a 21-16 22-20 victory in Men’s Doubles over Choi Sol Kyu and Heo Kwang Hee. The Indonesians were now 2-1 up and Korea could ill afford any further missteps with Women’s Singles and Doubles to come. However, Korean fans need not have feared as Kim Hyo Min again produced the goods when required, winning Women’s Singles 21-15 21-18 from Hanna Ramadini.

The tie was level for the last time – 2-2 – and the honour fell to Korea’s Women’s Doubles duo, Kim Ji Won and Chae Yoo Jung (BWF home page) to clinch the title, defeating Rosyita Eka Putri Sari and Setyana Daniella Florensia Mapasa, 21-18 21-11. The victorious pair, especially Chae who had lost Mixed Doubles, was overcome with emotion as they celebrated with their team-mates and coaches (centre below).

Last year’s champions, China, beat Japan for third place by a similar 3-2 margin, coming from 2-0 down after losing Men’s Doubles and Women’s Singles.

There will be a break in competition tomorrow before the SCG BWF World Junior Championships resume on Tuesday with the individual events for the Eye Level Cups. That will conclude next Sunday, 3 November.