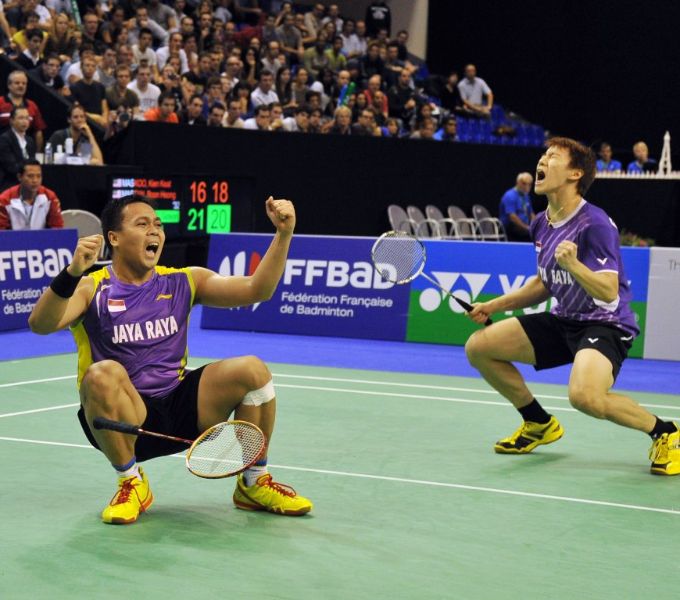 Capping a remarkable campaign in Paris, the fledgling combination – who paired up last month and had to negotiate the qualifying stage – romped to victory 21-16 21-18 over No. 4 seeds, Koo Kien Keat and Tan Boon Heong of Malaysia. It was a fairytale finale for the duo who worked their way through the tournament, causing a series of upsets en route to the championship. They followed in the footsteps of new Korean pair, Lee Yong Dae and Yoo Yeon Seong, who took home the Denmark Open crown last weekend.

Their sparkling form continued in the final as they seized the initiative against Koo/Tan, with Fernaldi hammering smashes from the back and Kido showing great inventiveness at the front. There were few long rallies in the match with points being won after three or four exchanges, despite Koo and Tan trying to change the flow. The second game was tighter but, in the closing stages, Kido and Fernaldi held their nerves at critical moments, though clearly keen to reach match point.

Meanwhile, in Women’s Doubles, another pair which has not been together long swept to their third title in as many weeks. Bao Yixin and Tang Jinhua (centre above) outplayed senior Chinese compatriots and Olympic champions, Tian Qing and Zhao Yunlei, 21-13 21-17. The latter were worn down by Tang’s rasping smashes and Bao’s imposing presence at net. Theirs was one of three titles for China on a day of riveting action, with triumphs also in Women’s Singles, thanks to Wang Shixian, and in Mixed Doubles as Zhang Nan and Zhao Yunlei (centre below) again proved an unbeatable force. Denmark’s Jan O Jorgensen (below; left) overcame his Men’s Singles semi-final loss on home soil a week ago to outshine Kenichi Tago in the City of Light; claiming his second Superseries title.

In a smartly-executed 21-19 23-21 victory, Jorgensen denied the Japanese No. 3 seed the chance to impose his attacking game by disallowing Tago the angles and positions at which his smashes would be most effective. The Dane also pounced on every opportunity at net and controlled the front court, leaving Tago strangely subdued.

Still, Tago led in both games only to see Jorgensen fight back from 16-19 in the second as his rival was impatient during the rallies, smashing wildly when he had an opening. Jorgensen converted his second match point and celebrated with an on-court jig.

* In Women’s Singles, Wang Shixian (above; right) won her second title of the year, outplaying Porntip Buranaprasertsuk (Thailand), 21-18 21-18. Wang was steady throughout the match while Buranaprasertsuk swung from impressive to erratic, unable to keep the pressure on her opponent for sustained periods. The latter stage of the match saw some engrossing rallies, with Wang exploring all corners of the court and Buranaprasertsuk throwing herself at every shuttle; the fightback from the Thai could have pushed the match into a third game had she not been so erratic at crucial times.

* Zhao Yunlei made up for her disappointment by winning the Mixed Doubles title with Zhang Nan. The Olympic champions thwarted compatriots Xu Chen/Ma Jin for the 14th time in 16 meetings with a 28-26 21-17 outcome: saving six game points in the first game.