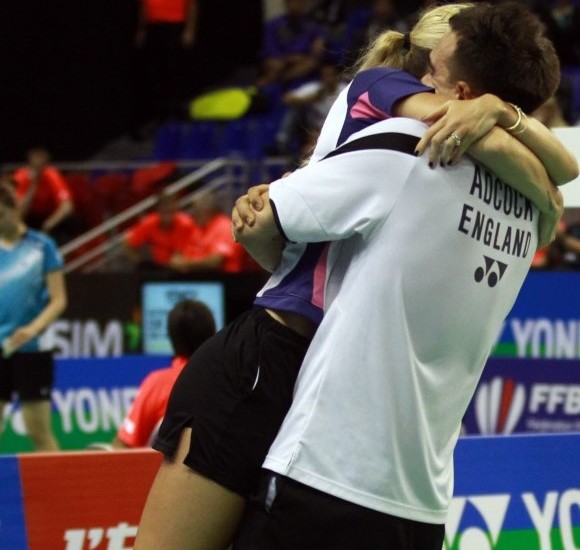 The Women’s Doubles No. 1 unit of Yu and Wang had not lost a single match to a non-Chinese pair since January 2012 – a run of over two-and-a half years (excluding the London Olympics). The opponents who finally toppled them was the Indonesian pair of Greysia Polii/Nitya Krishinda Maheswari (right), who, despite a 15-19 deficit and facing two match points, pulled off an unlikely outcome: 21-17 14-21 23-21.

Ratchanok Intanon of Thailand – the Women’s Singles World champion – also figured among the day’s casualties, struggling badly against seventh seed Wang Shixian (China). Intanon was a shadow of herself in the first game as Wang used cross-court shots to catch the World champion out of position repeatedly. Intanon appeared unwilling to chase down shuttles and the first game was over quickly. However, she regrouped in the second and it was close all the way, with Intanon using her trademark deception and half-smashes to stay level. Her rustiness still showed at crucial moments though and Wang Shixian capitalised on her second match point – 21-10 22-20.

Mixed Doubles saw the departure of reigning World champions and No. 3 seeds, Tontowi Ahmad and Liliyana Natsir of Indonesia. The pair looked a mess against Chris Adcock/Gabrielle White (England), committing a series of errors. The newly-married winners (BWF home page) looked clearly keen to continue their honeymoon in Paris with a 22-20 21-17 victory.

No. 2 Women’s Doubles seeds Christinna Pedersen/Kamilla Rytter Juhl joined Yu/Wang on the sidelines. The Danes failed to convert five game points to force a deciding game, crashing out 21-19 25-23 to Korean duo, Jang Ye Na and Kim So Young (centre below). Bae gives her a semi-final against Wang Shixian. Defending champion Minatsu Mitani (Japan) lost her only crown, falling to the in-form Porntip Buranaprasertsuk (Thailand) 18-21 21-12 21-16. Buranaprasertsuk faces Japan’s Eriko Hirose in the other semi-final.

* In Men’s Singles, Jan O Jorgensen’s (Denmark, 4) clean slate over Dionysius Hayom Rumbaka (Indonesia) continued with his fourth win. Jorgensen (left) has not lost a game to Rumbaka in three previous matches and kept that record intact with a 21-19 21-13 result. He takes on Tanongsak Saensomboonsuk (Thailand), while the other semi-final pits top seed Lee Chong Wei of Malaysia against Kenichi Tago (Japan, 3).

* Yu Yang and Wang Xiaoli were nearly followed out of the tournament by compatriots and Olympic Women’s Doubles champions Tian Qing and Zhao Yunlei. Their Japanese opponents Misaki Matsutomo and Ayaka Takahashi were outstanding as they came within a point of another surprise result – Takahashi powering the attack from the back and Matsutomo outfoxing the Chinese with deft returns and tight net play. However, the fifth-seeded Chinese scrambled to safety, saving three match points in the third game to prevail 22-20 13-21 23-21.