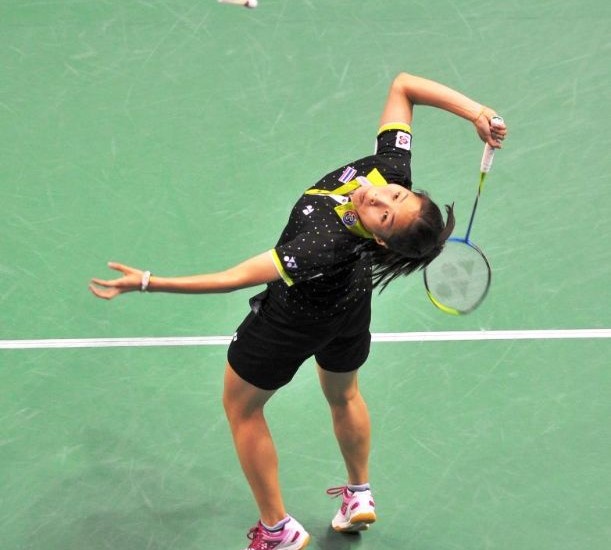 Chris Adcock had a great day at the Yonex French Open 2013, winning both his doubles matches against higher-ranked pairs today.

The Men’s Doubles team of Adcock and Andrew Ellis (England) tasted success in the second-round match, a sensational upset of Kim Ki Jung/Kim Sa Rang (Korea, 6). Each of the three games went down the wire. Adcock and Ellis recovered from a near-hopeless position at 13-19 in the first game to win it 22-20; the Koreans held them off for the second game, but in the third, the Englishmen grabbed five points in a row to lead 15-13 and did not falter thereafter, sealing the match 22-20 19-21 21-18 to enter the quarter-finals. (Indonesia, 8), having beaten the same opponents in Denmark last week. This time, the English pair dismissed their Mixed Doubles rivals 21-8 21-8 in the second round.

Last year’s runner-up Saina Nehwal – the No. 4 seed from India – lost her second match in a row to Bae Yeon Ju (Korea) in one of the longest matches of the day. Bae improved her head-to-head record against Nehwal to 4-5, with her previous win coming in the quarter-finals at the BWF World Championships. Bae recovered from match point down in the third game to conquer 20-22 21-15 22-20 in 71 minutes.

The other casualty in Women’s Singles was Juliane Schenk (Germany, 3), beaten 21-18 21-14 by defending champion, Minatsu Mitani of Japan.

There were no surprises in store for World champion Ratchanok Intanon (Thailand, 2; featured image) as she cruised past Karin Schnaase (Germany) 21-16 21-13. Tai Tzu Ying (Chinese Taipei, 8) was a 21-17 21-19 winner over qualifier Chen Jiayuan (Singapore).

* Tommy Sugiarto exacted revenge for his straight-games loss to China’s Chen Yuekun last week during their Men’s Singles clash in Denmark. The Indonesian’s 21-18 21-13 victory today gave him an appointment with third seed Kenichi Tago of Japan.

* The longest match of the day was between fellow Indonesians Dionysius Hayom Rumbaka and Sony Dwi Kuncoro in another Men’s Singles match. The battle wore on for 85 minutes, with both players earning match point in the third game. Eventually, it was the younger Rumbaka (centre above) who survived, coming through the ordeal 21-15 17-21 24-22.