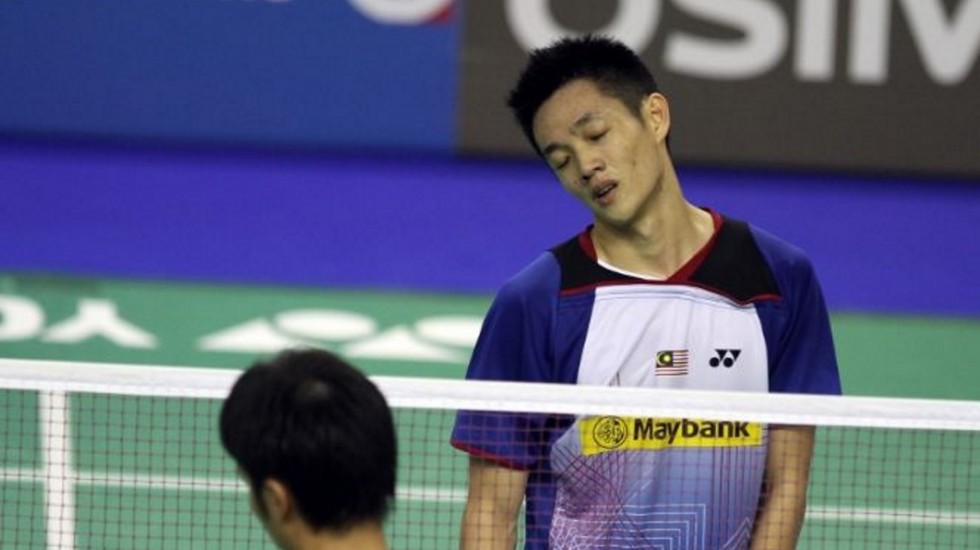 Defending Men’s Singles champion Daren Liew surrendered his title in the first round at the Yonex French Open 2013 today.

Malaysia’s Liew (featured image) has been inconsistent since his career’s biggest moment in Paris last year; his best performance thereafter being a quarter-finalist at his home Malaysia GP Gold in May. Against veteran Boonsak Ponsana (Thailand, 6), Liew failed to capitalise on winning the first game and leads of 15-8 and 19-14 in the third game. Ponsana grabbed the last seven points to record a 15-21 21-15 21-19 victory.

Liew’s senior compatriot Lee Chong Wei (1), coming off defeat in the final of the Denmark Open on Sunday, ensured a second-round place with a 22-20 21-12 result over Kashyap Parupalli (India). Lee raced to a 15-5 lead, only to see Kashyap scrambling level at 20 after saving three game points. The top seed, however, kept his composure to take the game, and he was able to reassert his dominance in the second.

Thailand’s Maneepong Jongjit (centre below) had a successful return to the international circuit after serving a three-month ban for an altercation with former Men’s Doubles team-mate Bodin Issara during the Canada Open. Competing in Mixed Doubles, Jongjit and Sapsiree Taerattanachai made the main draw after winning two qualifiers. The Thai pair beat Ronan Labar/Emilie Lefel (France) 21-10 21-19 in their first match before ousting German pair, Johannes Schoettler and Johanna Goliszewski, 21-9 21-11.

* Russians Ella Diehl and Ksenia Polikarpova qualified to the main draw of Women’s Singles along with Chen Jiayuan (Singapore) and Sabrina Jaquet (Switzerland). Diehl overcame Line Kjaersfeldt (Denmark) 21-18 21-16, while Polikarpova was an easy 21-7 21-8 victor over Tai Ching Chieh (Chinese Taipei) in the second round of qualifying. * France’s Lucas Corvee and Brice Leverdez won a thrilling Men’s Doubles second-round qualifier over compatriots Bastian Kersaudy/Gaetan Mittelheisser. Corvee and Leverdez fought a deficit and led towards the final stages but their opponents equalised at 19. A few tense moments later, it was Corvee/Leverdez who advanced – 19-21 21-15 21-19.