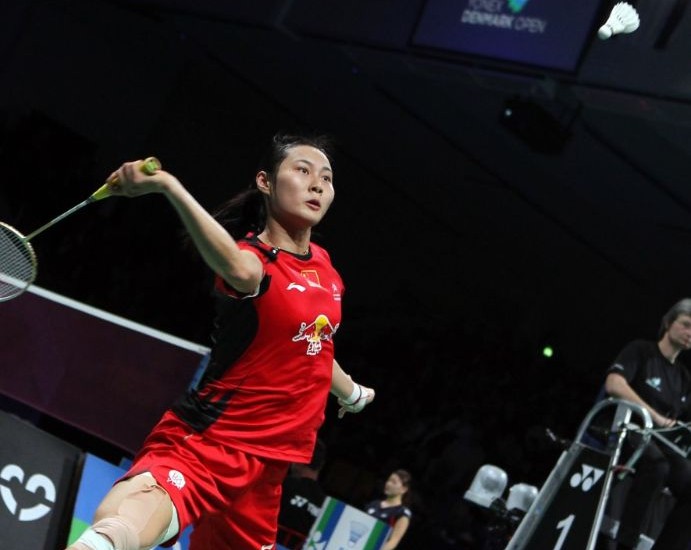 Wang Yihan overcame Thailand’s Ratchanok Intanon in a battle of former and present World champions in the semi-finals of the Yonex Denmark Open 2013 today.

Intanon, the No. 2 seed and the current Women’s Singles World champion, was engaged in a riveting match with her predecessor Wang (China, 5). The 18-year-old stole the first game from Wang’s grasp and, with a 13-6 lead in the second, appeared headed for victory.

However, Wang (featured image) showed great reserves of mental strength, lifting her game in time to force a decisive third game. Again, it was an engrossing affair: the difference being that Intanon chose to serve high throughout, giving Wang the option to attack at the start of each rally. The Chinese – who lost her World Championship title in August – capitalised on that, keeping Intanon under fire and finishing comfortably 21-23 21-19 21-17 in 77 minutes. She remains unbeaten in seven encounters versus Intanon.

Facing her for the title will be Sung Ji Hyun (Korea, 6), who entered her first Superseries final since capturing the Korea Open in January. Sung (left; below) controlled her match against Wang Shixian (China, 7), scoring a 21-19 21-14 win. Wang led briefly but was ultimately undone by the relentlessness of the Korean whose long reach helped her return several promising shots from the Chinese.

Meanwhile, Lee Yong Dae and Yoo Yeon Seong (right; above) announced themselves as the potential solution to Korea’s Men’s Doubles quest while advancing to tomorrow’s final. They convincingly beat Danish top guns, Mathias Boe and Carsten Mogensen, before a hugely partisan crowd in Odense, with a dominant 21-18 21-13 display.

Giving their more fancied rivals little opportunity to impose the usual brute-force tactics that have underpinned the Danes’ success over the past year, the Korean pair – only recently thrown together amid the latest reshuffle of Men’s Doubles commodities – played with guile and were quick at net. Their ability to turn defensive positions into attack paid off handsomely at times as they outclassed Boe and Mogensen.

In Men’s Singles, Lee Chong Wei and Chen Long will clash for the title, with defending champion Lee (Malaysia, 1) and 2011 champion Chen (China, 2) overcoming their respective opponents today. It’s the first time the two face each other in a final since this year’s All England.

Chen Long (left) was tested by Thailand’s Tanongsak Saensomboonsuk, but the Chinese world No.2 came through in straight sets in their semi-final. The Thai was impressive in the first game, firing several big crosscourt smashes past Chen, but he was unable to maintain that high intensity through the second game. His net play in particular let him down and Chen eased past him 21-18 21-13.

Lee took time to find his range against Du Pengyu (China, 3). He lost a tight first game, but he was sublime in the second and third; his outstanding defence on either flank was able to counter whatever Du threw at him. Additionally, Lee’s precision was off in the first game but in the second and third he scored winners at will, completing the match 20-22 21-6 21-15.

“Du played well in the first game,” said Lee. “I increased my speed in the second. My defence was very good. I’m familiar with Chen Long’s game and will do my best.”

* The hosts had a disappointing day on court, losing two of their three matches. Christinna Pedersen and Kamilla Rytter Juhl (2) will be the sole Danish representatives in the finals after they beat Miyuki Maeda/Reika Kakiiwa (Japan) 21-17 7-21 21-8 in Women’s Doubles. Chinese pair Tang Jinhua/Bao Yixin (centre above) will contest the final against them.

* One of the Mixed Doubles semi-finals was a repeat of the gold-medal clash in the World Championships. China’s Xu Chen and Ma Jin were uncharacteristically off-colour against World champions Tontowi Ahmad/Liliyana Natsir (Indonesia), playing erratically to crash 21-11 21-18. The Indonesians take on Olympic champions Zhang Nan/Zhao Yunlei (China, 1), who were just as impressive with a 21-18 21-15 triumph over Joachim Fischer Nielsen/Christinna Pedersen (Denmark, 4).