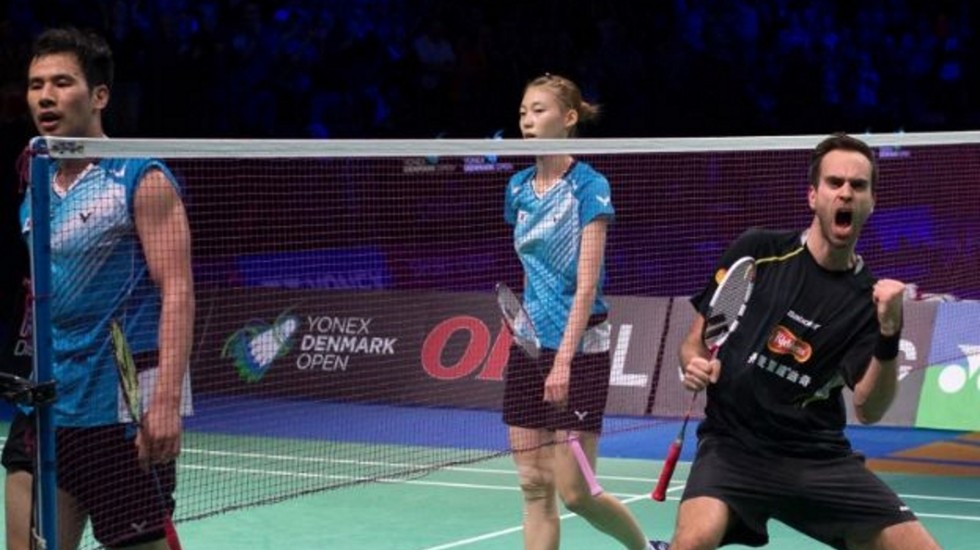 Seemingly down and out at 15-20 in the third game against Ko Sung Hyun/Kim Ha Na (Korea, 8), the Danes hung on, and buoyed by boisterous and inspirational home fans, levelled the score at 20-all. The match resembled a rollercoaster ride, with each team earning match point, only for the other to equalise. Ko and Kim (centre below) had ten match points, while Nielsen and Pedersen had four of their own. Eventually – at 29-all and facing the do-or-die shoot-out for the vital 30th point – Pedersen took charge at the net and set up the match-winning shot to delirious applause from spectators who sprung to their feet spontaneously and remained standing to salute the efforts of both pairs. The score: 21-14 10-21 30-29 to Nielsen/Pedersen.

“It’s one of the craziest wins of our career,” said a smiling and relieved Fischer Nielsen (featured image).

“It feels very nice. At 15-20 we didn’t think we were out. We were lucky today, for sure. We played badly on our own match points. While we were match points down, we just talked to each other. We believe in each other and we understand each other, and that’s important.”

The Danes will take on top seeds and Olympic champions Zhang Nan/Zhao Yunlei (China) in the semi-finals. England pair Chris Adcock/Gabby White struck an early blow in their quarter-final against the Olympic champions by saving three game points to win the opening game, but the Chinese shot to an early lead in the second game and never relinquished their grip on the match as they won 21-23 21-16 21-5. The other semi-final is between World champions, Tontowi Ahmad/Liliyana Natsir (Indonesia, 3), and Xu Chen/Ma Jin (China, 2) – meaning the last-four stage will be a repeat of the London Olympics semi-finals.

It was a day when favoured players did not have it easy. In Women’s Singles, defending champion Saina Nehwal (India, 4) was outplayed by Sung Ji Hyun (Korea, 6), 13-21 21-18 21-19, while World champion Ratchanok Intanon took over an hour to quell the challenge of veteran Japanese, Eriko Hirose. Former Denmark Open champion Wang Yihan (China, 5) was briefly in trouble against Bae Yeon Ju (Korea) at 16-19 down in the second game, but Wang (right) raised her game in time to run away with five straight points and the match, 21-17 21-19.

The Men’s Singles world No. 1 and current Denmark Open title-holder, Lee Chong Wei of Malaysia, overcame an inspired Jan O Jorgensen, 8-21 21-18 21-5. A massive upset appeared on the horizon when the Dane took the first game. Top seed Lee relied on his experience to climb back into contention 16-10 in the second game, only to see Jorgensen storm ahead 18-17. However, Lee kept his focus to win that game and turn the tide. The third was one-way traffic as a frustrated Jorgensen had nothing left to offer. Lee (centre below) now faces Du Pengyu (China, 3) for a place in the final.

Tanongsak Saensomboonsuk of Thailand has had an uneventful season since his semi-final performance at the All England tournament in March. Opposing Indonesia’s Sony Dwi Kuncoro in the quarter-finals, he was up against a dangerous rival who had put out the in-form Kenichi Tago (Japan, 4) in the second round. However, Saensomboonsuk did not allow Kuncoro a glimpse of victory, setting a high pace from the beginning. Kuncoro flagged under the pressure and * In Men’s Doubles, Mathias Boe and Carsten Mogensen (Denmark, 2) scored a surprisingly quick victory over Fu Haifeng/Hong Wei. The new Chinese pair took time to settle into a rhythm and their deficiencies were punished by the Danes, who played an astute tactical match and closed it out in straight games: 21-11 21-18. “We reduced the pace of the game,” said Boe. “We tried to keep up a drive game, and our defence was pretty good.” China’s other experimental duo, Cai Yun and Chai Biao, also fell in straight games, 21-16 21-16, to Hiroyuki Endo/Kenichi Hayakawa (Japan, 3).