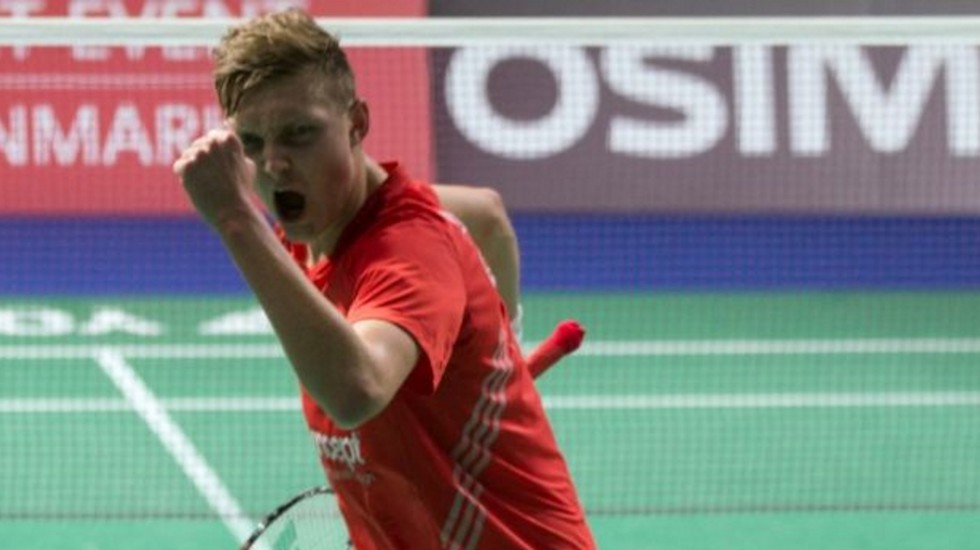 Danish young gun and local lad, Viktor Axelsen, gave home fans in Odense much to cheer about tonight with an impressive start to his Yonex Denmark Open 2013 campaign.

Pitted against another European, Marc Zwiebler of Germany, the lanky 19-year-old showed maturity and determination to oust his senior rival in straight games

before a noisy and clearly partisan crowd. Having grown up in the neighbourhood of the tournament venue, Axelsen (featured image) showed why he is so highly regarded, withstanding Zwiebler 21-13 22-20.  The former World Junior champion had a relatively easy first game, but Zwiebler – the European champion – fought back by preventing the Dane from unleashing his big smashes.

Axelsen, however, saved two game points to snatch the match. He is among a cluster of Danes who have advanced to round two, with home players featuring in 11 matches tomorrow. Axelsen has earned a second-round appointment with defending champion Lee Chong Wei (Malaysia, 1) – Thursday’s nightcap! youngster Han Li. After a first-game loss, Schenk led 20-11 in the second but Han closed the gap with a string of points before a lucky net cord helped Schenk level the honours. The third game was neck-and-neck to 19-all, before the German eked out the last two points, winning 17-21a 21-17 21-19.

“It’s always tough against the Chinese,” said Schenk. “This could have been a semi-final or final. I’ve been playing the Indian and China leagues which had shortened scoring formats, so it felt a bit strange today.”

Defending Women’s Singles champion Saina Nehwal led a good Indian performance in which she and three of her male team-mates lived to battle another day. The No. 4 seed dispatched Stefani Stoeva of Bulgaria in 27 minutes, 21-16 21-12. She now faces Scotland’s Kirsty Gilmour (left) who was taken the distance by Denmark’s qualifier Sandra-Maria Jensen, 21-18 15-21 21-10.

In Men’s Singles, Kashyap Parupalli was on court for only eight minutes and leading 11-4 when his opponent Liew Daren (Malaysia) retired; Ajay Jayaram took about half-hour to eliminate No. 8 seed Boonsak Ponsana (Thailand) 21-11 21-14, while Guru Sai Dutt also recorded an upset with a 21-17 21-14 dismantling of world No. 11 Hu Yun (Hong Kong).

The only setback for India was the loss of World Championships bronze medallist PV Sindhu to Japanese veteran Eriko Hirose in Women’s Singles. Sindhu had an opportunity to take the match into the third game as she had game point in the second, but Hirose worked her way out of trouble and clinched the match, 21-19 22-20. * Another new combination, Tang Jinhua/Bao Yixin (China), were also tested to the limit in a 74-minute Women’s Doubles match by Indonesia’s Greysia Polii/Nitya Krishinda Maheswari, before the Chinese prevailed 19-21 21-18 21-18.

* Recently-crowned Women’s Singles World champion, Ratchanok Intanon of Thailand, returned to the court with an emphatic 21-9 21-11 success over New Zealander, Michelle Chan Ky. It was Intanton’s first tournament match since her memorable outing at the BWF World Championships in Guangzhou, China, as she was sidelined with a back injury.