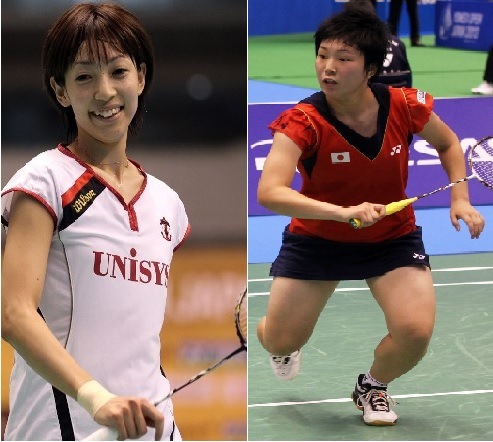 Two unheralded players created history by ensuring a first-ever title for the home country at the Yonex Open Japan 2013 today. No Japanese player has ever savoured victory in the tournament’s 32-year history. That changed this afternoon as Shizuka Uchida and Akane Yamaguchi (BWF home page; left and right respectively) confirmed it will be an all-Japanese Women’s Singles final with stunning semi-final upsets: Uchida shocked Olympic silver medallist Wang Yihan of China – 21-17 21-14 – while Yamaguchi cut short Tai Tzu Ying’s (Chinese Taipei, 6) hopes of defending her title, with a 26-24 21-14 rout.

Japan will also have a shot at glory in Men’s Singles as local hope Kenichi Tago (7) powered past Gao Huan (China) 21-12 21-12 to reach his fifth Superseries final. However, Lee Chong Wei (Malaysia, 1), his opponent in the final, has a 13-0 record against him and will be favoured to defend his Japan Open crown tomorrow.

Both Tago and Lee Chong Wei (left; chatting with Ma Jin) were impressive in their semi-final matches. Tago, up against a player of identical style, Gao of China, started slowly and stepped on the gas as the match progressed. He pushed the tempo at will, using his explosive pace and jump smashes to put Gao under pressure, and the Chinese youngster was unable to respond. What also aided Tago was his high-quality defence, diving full-length on occasions to retrieve seemingly certain winners from his opponent. The frustrated Gao’s challenge wilted in the second game.

Lee Chong Wei was majestic in his semi-final against Vietnam’s Nguyen Tien Minh (5). He dictated the pace and rhythm of every rally and fired winners at will to leave Tien Minh (centre below) baffled. Lee shot to a 11-2 lead and took the first game 21-10; he was even more destructive in the second only surrendering five points.

The two Women’s Singles semi-finals, played on adjoining courts, resulted in a dream final for the home crowd. Wang Yihan was left bewildered by Polish Open 2013 winner Shizuka Uchida, who was promoted from the qualifying draw and upset two higher-ranked players en route to the semi-finals. The Japanese took an early lead and was never overtaken by her experienced and accomplished rival.

Like Uchida, Yamaguchi has had an inspired run at this event. Her opponent Tai Tzu Ying appeared to have too many weapons for the 16-year-old, and was comfortably ahead in the first game, using her deception and sharp strokes to open up the court. Sublime net shots showed Tai at the top of her game and, with three game points at 20-17, she could not have foreseen the sudden change of fortunes.

A few unforced errors from Tai and Yamaguchi was level at 20-all. The defending champion blew an easy opportunity at the net when she sent the shuttle long; on another game point a line judge called her opponent’s shot wide but was overruled by the chair umpire. Yamaguchi saved six game points before unbelievably snatching the first game.

* In Men’s Doubles, Mohammad Ahsan/Hendra Setiawan (Indonesia, 1) advanced to their third straight Superseries final after a tough encounter against Kang Jun/Liu Cheng of China. The 21-12 18-21 21-18 victory will see them play another Chinese pair, Chai Biao/Hong Wei (China) for top honours. Chai/Hong (centre below) trailed Mathias Boe/Carsten Mogensen (Denmark, 2) for most of the third game in their semi-final but recovered to clinch victory: 21-11 15-21 21-19.