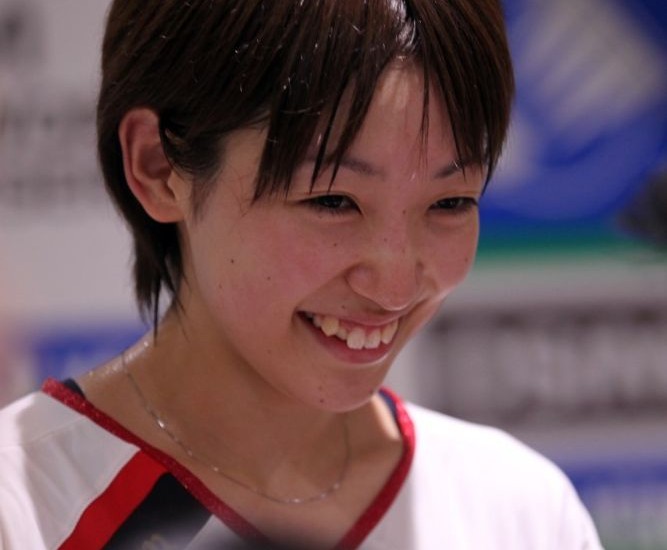 The 16-year-old local player, who came through qualifying before beating No. 8 seed PV Sindhu of India in the second round, overwhelmed senior compatriot Yui Hashimoto 21-12 21-16. She plays defending champion Tai Tzu Ying (Chinese Taipei, 6) for a place in Sunday’s final. The other semi-final features Wang Yihan (China, 4) against another Japanese  hopeful, Shizuka Uchida (BWF home page).

Yamaguchi has been the revelation of this tournament. Playing only her second Superseries – her first was the Yonex Open Japan 2012 – she showed maturity beyond her years as she outplayed Hashimoto.

The teenager burst out of the blocks with an 8-0 lead and, although Hashimoto tried to reel her in, the first game was out of the question. The teenager mixed her play beautifully, conjuring sharp drops, tight net shots and well-angled smashes to leave Hashimoto in a constant state of indecision. Hashimoto found her rhythm in the second game, patiently working her points in the rallies, and not attempting to gain quick points. She took six straight points for a 11-7 lead heading into the break. However, this was where Yamaguchi’s composure revealed itself. She picked up her level and pocketed eight points in a row, controlling every rally with a variety of attacking shots. Her tight netplay forced Hashimoto to constantly lift the shuttle and go on the defensive. Another well-worked point after a final rally ensured Yamaguchi’s debut in a Superseries semi-final.

The Men’s Singles quarter-finals had three Indians; none survived into the next round. Fast-emerging talent Kidambi Srikanth had the tough task of getting past seventh seed Kenichi Tago (Japan), but Srikanth was not given a chance. Tago asserted himself with explosive bursts of power, and the intensity of his attack caused his Indian rival to wilt. The Japanese shot off to leads of 11-5 and 18-13. Srikanth made a belated fightback, using sharp half-smashes to reach within a point of his rival. However, the Indian became erratic at crucial moments and Tago pocketed the first game. In the second there was no stopping him as he picked points at will. Tago faces China’s Gao Huan, while top seed Lee Chong Wei (Malaysia) does battle versus Nguyen Tien Minh (Vietnam) in the semi-finals.

* Women’s Doubles defending champions Poon Lok Yan/Tse Ying Suet of Hong Kong were undone by smart tactical play from local favourites and second seeds Misaki Matsutomo/Ayaka Takahashi. Poon and Suet began well with a 11-5 lead; however, it was all Japan after the mid-game interval. The Japanese were infallible in defence, returning all the big shots from their rivals, while they maintained attack for long periods to draw the final error.

* Liu Cheng also made the semi-finals of Men’s Doubles, as he and Kang Jun got a walkover from compatriots Liu Xiaolong/Qiu Zihan (4). They run into World champions Mohammad Ahsan/Hendra Setiawan (Indonesia, 1), while in the other half, second seeds Mathias Boe/Carsten Mogensen (Denmark) will be up against another Chinese pair, Chai Biao/Hong Wei.